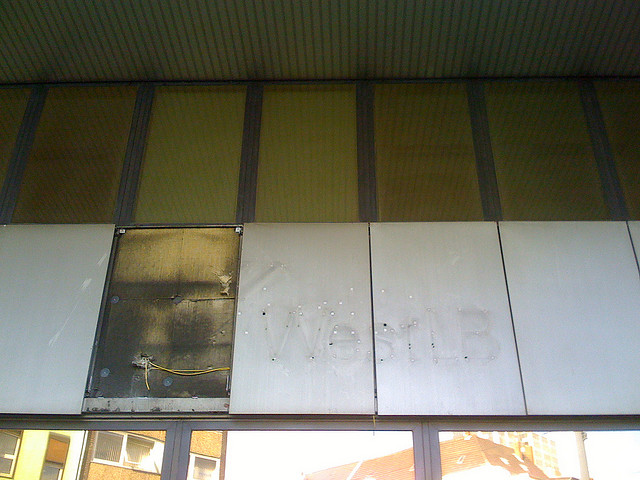 A closed-down branch of Germany's WestLB bank at the height of the crisis. October 2008. [Jaro/Flickr]

For the first time since the financial crisis struck in 2008, the European Union is carrying out stress tests that could force change at banks with strong political connections, such as Germany’s regional banks – the “Landesbanken”.

The European Central Bank (ECB) is leading the latest attempt to uncover problems that would endanger any lender’s survival in a future crisis. Unlike the three previous efforts, which were hamstrung by national authorities’ reluctance to expose their banks’ weaknesses, Frankfurt has a vested interest in revealing problems before it takes over as supervisor in November.

The results of Europe’s most comprehensive ever review of its banks’ health will be announced on Sunday, 26 October, sources told Reuters.

The European Banking Authority is co-ordinating tests across 28 EU countries. The ECB results will include granular detail on the finances of about 130 eurozone banks and the capital actions they must take.

“The last time the process was done at the national level by the same old supervisors,” said Nicolas Veron, an expert on banking at the Bruegel think-tank in Brussels and the Peterson Institute for International Economics in Washington.

“Here, we have a completely new pair of eyes, and the ECB has every incentive to be tough because the ECB doesn’t own the present failures but it will own the future failures.”

The tests are likely to force some banks into raising more cash to prove they can withstand another downturn without the taxpayer-funded rescues that a number needed in the last crisis.

But crucially, EU rules restricting state aid have been toughened since the last stress tests in 2011. This means any bank seeking government money to fill a hole revealed by the ECB review may have to restructure its business, as well as forcing losses on shareholders and junior creditors if the European Commission decides the injection represents state aid.

Germany’s HSH Nordbank, majority owned by the local governments of Hamburg and Schleswig-Holstein, and a major lender to the troubled shipping industry, flagged this restructuring risk in a note accompanying its half-year results.

HSH has said it is confident it will pass the tests, the results of which are expected in late October, but some analysts see it as one of the German lenders at risk of failing.

If it were unable to fill any capital hole itself and needed its local government owners to step in, Brussels could order HSH to close down as it has already received €13 billion in guarantees and capital from German taxpayers.

The Commission normally requires banks that receive state aid at least to undergo substantial restructuring, shrink their balance sheets and spin off some activities to avoid distorting competition with healthy lenders. All such aid has to be notified to the EU competition commissioner, who typically sets tough conditions for approval.

If any of Germany’s regional banks, known as Landesbanken, do need help from their state owners, this could put the federal government in Berlin on a collision course with Brussels. Such funding would constitute state aid, but would not necessarily be illegal. EU rules permit government help if it is linked to restructuring, and the public owner acts as a rational investor.

In their coalition agreement, Germany’s government parties said help from public sector owners following the ECB tests should be treated in the same way as that from private owners.

“That is a political promise that I trust,” Liane Buchholz, managing director of the VOEB association of public sector banks said. “It cannot be that one EU institution (the ECB) asks for a recapitalisation and another EU institution (the Commission) then sanctions this as state aid,” she said, adding that the VOEB was confident all Landesbanken would pass the tests.

European taxpayers shelled out €1.6 trillion euros to guarantee and support their banks between 2008 and 2010 alone. To ensure this never happens again, EU leaders agreed to create a banking union so that investors, rather than the public, pick up the tab when banks get into trouble.

As a major step towards Europe’s long-term goal of breaking the link between governments and banks, the aftermath of the ECB’s tests will be closely watched.

“Will there be no special favours for banks that have powerful political sponsors? To me, that is going to be the test,” said Veron. “If there is nothing that changes in the Landesbank landscape after results of the comprehensive assessment, many people will be surprised and disappointed.”

It is hard to say yet whether national governments will be able to influence the size of the capital holes revealed or the treatment of any public funds used to plug shortfalls.

Franco-Belgian lender Dexia, which has had €12 billion euros in state aid and is being wound down, won a powerful concession by not having to prove it could withstand a financial crisis in the tests, according to sources familiar with the matter.

On the other hand, the ECB has overruled German objections, and is making banks such as HSH Nordbank and fellow Landesbank Nord LB as well as Commerzbank use more conservative valuations for their shipping loans, sources have told Reuters.

This treatment is one of the reasons why some analysts believe these three banks might fail the stress test and balance sheet review. The banks themselves have said they are well prepared for the scrutiny.

The ECB is giving lenders 6-9 months to fill any capital shortfalls it uncovers; they are expected to sell shares, cut dividends, raid earnings and sell assets and bonds to do so.

Eurozone banks undergoing the ECB’s tests have increased their capital buffers by €103.5 billion since June last year, nearly half of it by selling shares on the stock market.

Banks without a stock market listing – around half of the 130 or so being tested in the eurozone – are more constrained in their ability to raise extra capital.

Credit ratings agency Fitch said Austrian cooperative bank Volksbanken, which has been bailed out three times by the government since 2008, may need yet more state aid because it looks likely to fail the ECB review.

Politically-connected banks have been at the heart of Europe’s financial crisis. These ranged from Hypo Alpe-Adria, a sleepy Austrian provincial lender until it raised its exposure to the Balkans with the backing of late far-right leader Jörg Haider, to Spain’s savings banks or “cajas”, whose property loan binges were approved by politicians sitting on their boards.

External institutions have had some success in diluting the interplay of local politics and high finance in Europe.

The Commission cancelled state guarantees for the German Landesbanken in 2001 and it sounded the death knell of WestLB, once the biggest, which was wound down in 2012 after repeated bailouts on the back of trading scandals and losses.

The IMF and the EU pushed Spain effectively to do away with the savings bank model after the country was forced into a €41.3 billion bailout due to their property losses. Spain has replaced the cajas with a system of more tightly-regulated banking foundations which in turn are shareholders in commercial banks.

But even this system, and Spain’s handful of cooperative banks, could face further changes when the ECB takes over as supervisor and lenders come under ever greater pressure to beef up their capital, pushing them to bring in outside investors and overhauling their structure.

Italy’s cooperative banks, owned by their customers and employees, could also come under pressure to reform their ownership model if they are revealed to have large capital holes that require them to raise more funds from investors.

Although some of these “popolari” banks are listed on the stock market, they give all shareholders the same voting rights regardless of the size of their holdings.

The one-investor-one-vote rule, designed to bind the popolari to their region, has not prevented them raising €4.3 billion in equity so far this year, but investors could demand a greater say in a second round of rights issues.

“I would not rule out that some popolari banks, especially if they fare particularly poorly in the asset-quality-review and stress tests, may be under some pressure to switch to the standard governance model,” said Andrea Resti, professor of finance at Bocconi University and a member of the supervisory board for UBI Banca.

Critics of the Landesbanken hope that having the ECB as supervisor will force more change. The banks have already shrunk their balance sheets by 40% since the crisis, partly due to restructuring plans agreed with Brussels.

“The political affiliation with the Landesbanken is too strong, so reforms from within Germany are not very likely to happen,” said Jörg Rocholl, president of the European School of Management and Technology (ESMT) in Berlin. “This external impetus may lead to change.”

The IMF and the OECD have both called for more private ownership of the Landesbanken to boost their profitability, which was weak even before the crisis struck, and to dilute the influence of local politicians who sit on their supervisory boards.

Buchholz said privatising the Landesbanken did not make sense because their economic position had improved since the crisis and she defended having politicians help oversee their activities. “Expertise is important for membership of a supervisory board. I don’t think it’s fair to assume that politicians per se don’t have the necessary expertise.”