ECB stresses ‘readiness to act’ in face of Brexit headwinds

European Central Bank policymakers warned of “new headwinds” for the eurozone following Britain’s vote to quit the EU, according to minutes of their July meeting released on Thursday (18 August).

“Downside risks had clearly increased,” in the wake of Brexit, noted the accounts made public four weeks after the governing council met last month. The votes and views of particular council members are not revealed.

The ECB policymakers stressed that “the governing council needed to reiterate its capacity and readiness to act”, but there was no more concrete sign in the minutes that the ECB plans to further loosen monetary policy in response to the Brexit vote, which could strike a blow to growth in the eurozone.

In fact, the council did not want to be seen “fostering undue expectations” about how the bank might respond. 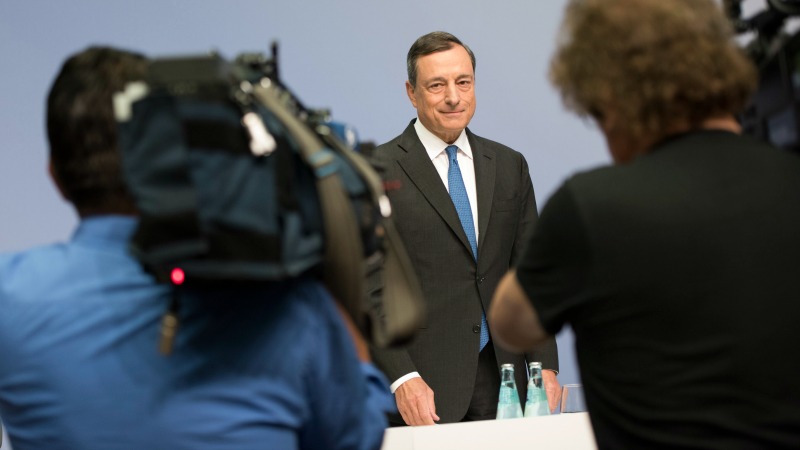 Supervisors of the European Central Bank are questioning banks over their preparations for a
possible British exit from the European Union and the ensuing reaction in foreign exchange markets, Handelsblatt reported on Wednesday (9 March).

‘Ready, willing and able’ to intervene

ECB President Mario Draghi did announce after July’s meeting that the bank was “ready, willing and able” to intervene if necessary, although he left interest rates and “quantitative easing” measures unchanged until September.

The ECB’s headline deposit rate of interest – paid on money banks store with the central bank – has stood at negative levels since 2014.

Meanwhile, the bank is buying around €80 billion ($90.5 billion) of securities a month under its stimulus programme known as quantitative easing (QE) and offering banks cheap loans.

By pumping money into the financial system, the ECB hopes to boost inflation to its target of just under two percent.

But such “unconventional” interventions by the ECB have so far contributed to only sluggish performance in many eurozone economies.

Eurozone inflation stood at just 0.2% in July, Eurostat confirmed on Thursday, an eight-month high for the single-currency zone and up from June’s 0.1% – but well short of the ECB’s target.

The UK’s decision to leave is being felt on the other side of the Channel; the German economy has been hit by the result as well, the president of Germany’s central bank told EURACTIV’s partner WirtschaftsWoche.

By the 8 September policy meeting, the ECB council will have more information at its fingertips, including its own staff’s economic forecasts.

Relative calm on financial markets and high confidence in eurozone business surveys since Britain’s 23 June referendum “might suggest that there is no need for further loosening” at next month’s gathering, analyst Jennifer McKeown of Capital Economics said.

But she noted that slowing GDP growth in the second quarter and a strengthening euro could sap inflation and push the ECB to loosen monetary policy further.

Policymakers’ options include boosting the amount of securities the bank buys each month, extending the QE programme past the current March 2017 deadline, and further lowering the deposit rate into negative territory.

“We are convinced that all three will be needed before long,” McKeown said.

But Howard Archer of IHS Global Insight was “doubtful that the ECB will take interest rates any lower.”

According to the minutes, ECB council members believe the central bank should instead focus on the measures it announced last March — boosting the amount of bonds it buys each month, extending QE to corporate as well as government bonds, and offering banks new cheap loans.

“Heightened concern over the impact that negative/low interest rates are having on eurozone banks” makes a further cut unlikely, Archer said.

European Central Bank President Mario Draghi said the ECB was “ready for all contingencies” in the event of a Brexit vote in the UK.

Speaking at the European Parliament’s Committee of Economic and Monetary Affairs before the 23 June referendum, Draghi did not give details of any preparations.

But he said that there were “extensive consultations” between central bankers and the International Monetary Fund, although no precise plans were being prepared to deal with the consequences of the vote.

Draghi warned however that it was hard to assess whether the ECB’s actions would be enough to calm down turbulence triggered by a Brexit vote. “It is very difficult to foresee the impact on the various dimensions a vote in the United Kingdom would have on the markets and the eurozone economies,” he said.

European Central Bank President Mario Draghi said on Tuesday (21 June) that the ECB is ready for every scenario after Britain's referendum on EU membership, but warned that liquidity was vital to prevent investor panic after a vote for Brexit.