EU in the dock at G20 summit 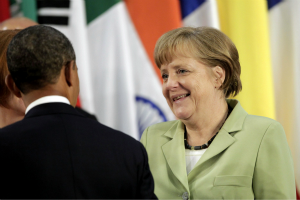 World leaders pressured Europe yesterday (18 June) to take ambitious steps to resolve its debt crisis after Sunday’s victory for pro-bailout parties in a Greek election failed to calm markets or ease worries that wider turmoil could derail the global economy.

Major industrialised and developing economies were set to urge Europe to take "all necessary policy measures" to resolve a crisis that has now raged for over two years, according to a draft communiqué seen by Reuters that was prepared for a Group of 20 summit in Mexico (see background).

US President Barack Obama, concerned that Europe's woes could upend his re-election hopes, requested a meeting with its leaders on Monday evening.

Earlier he met with Germany's Angela Merkel, who as the leader of Europe's biggest economy is under intense pressure to move faster on deeper financial and fiscal union in the eurozone, but has so far resisted. Obama's spokesman said the president was encouraged by the talks, which touched on steps to "increase European integration".

In an apparent response to concerns among investors that Europe's banks could drag down entire countries, the eurozone members of the G20 would break "the feedback loop between sovereigns and banks," the draft communiqué said.

European officials hit back at the notion that they were to blame for weakening growth across the globe, and played down hopes for any quick miracle cure for the 17-nation eurozone.

"Frankly, we are not coming here to receive lessons in terms of democracy or in terms of how to run our economy," said European Commission President José Manuel Barroso.

In its strongest signal in three years that it would act to strengthen the recovery, the G20 said in their draft communiqué that countries without heavy debts problems were ready to act together to spur growth, if the economy slows a lot more.

The United States has pressed Germany as well as China to stimulate spending in order to help the world economy.

Merkel welcomed the Greek result but said she could not accept any loosening of the austerity measures and deep structural reforms Athens has agreed to as a condition of its two EU/IMF bailouts totaling €240 billion.

"The Greek government will and must deliver on the commitments it has agreed to," she said.

That puts her on a collision course with the winner of the Greek vote, conservative Antonis Samaras, who campaigned pledging to renegotiate elements of the rescue and reiterated that stance, saying "amendments" were needed to relieve "crippling unemployment and huge hardships" for Greeks.

Greece will ask to spread €11.7 billion in austerity cuts over four years instead of two, a New Democracy party source told Reuters in Athens.

German frustration with Greece's failure to deliver on its reform pledges has risen in recent months, as has Greek anger at the tough austerity prescribed by Berlin and its partners.

In a twist of fate, Greece's soccer team will battle Germany later this week in the quarter-finals of the European championships.

Council President Herman Van Rompuy said ahead of the summit that the EU “more than shares” the worries about the debt crisis in the euro area. He stressed that the figures should be “relativised”.

“Let us first look at facts and figures even in these stormy days. The impact of our current problems has to be relativised and can't be compared to the recession after the worldwide financial crisis of 2008-2009. The eurozone will face this year a mild recessions -0.3%, and next year a growth rate of an average of 1 %. …

“Due to past efforts the pace of fiscal consolidation is declining this year, and next year it will be very low. Our public deficit will be less than 3% on average at that time. …

“This crisis will take time to solve. There are no quick fixes nor silver bullets, but we will do all it takes to see it through.”

Commission President José Manuel Barroso said ahead of the summit that the EU “can and should now move further towards banking union”.

“The Commission will be ready this autumn to make proposals that complement and deepen what we have already put on the table for more effective and integrated banking supervision, a common deposit guarantee system and an integrated banking resolution scheme.

"Further ahead, we should deepen our fiscal union, notably by refining our financial backstops and achieving a more integrated budgetary coordination. Under strict conditions some forms of debt mutualisation will be considered. But let me be very clear: any future Eurobonds or Stability Bonds will not be a license to spend! On the contrary they will become a powerful tool for increased discipline and stability,” Barroso said.

Leaders from the G20 countries representing more than 80% of world output are holding two days of talks (18-19 June) in Los Cabos, Mexico, with the aim to prioritise growth and job creation against a backdrop of a weakening global economy.

G20 leaders are set to confirm they will double the IMF's firepower. The Fund's managing director Christine Lagarde said pledges now totalled $456 billion (€362 billion), up from the $430 billion in April, even though some emerging nations are frustrated with the slow pace of winning more power at the global lender.

China offered to contribute $43 billion (€34 billion) to the IMF's crisis-fighting reserves, adding to offers of $10 billion (€7.9 billion) each from Brazil, Russia and India.

The World Bank last week lowered its forecast for global growth in 2012 to 2.5% and said developing nations faced a long period of financial market volatility and weaker growth.