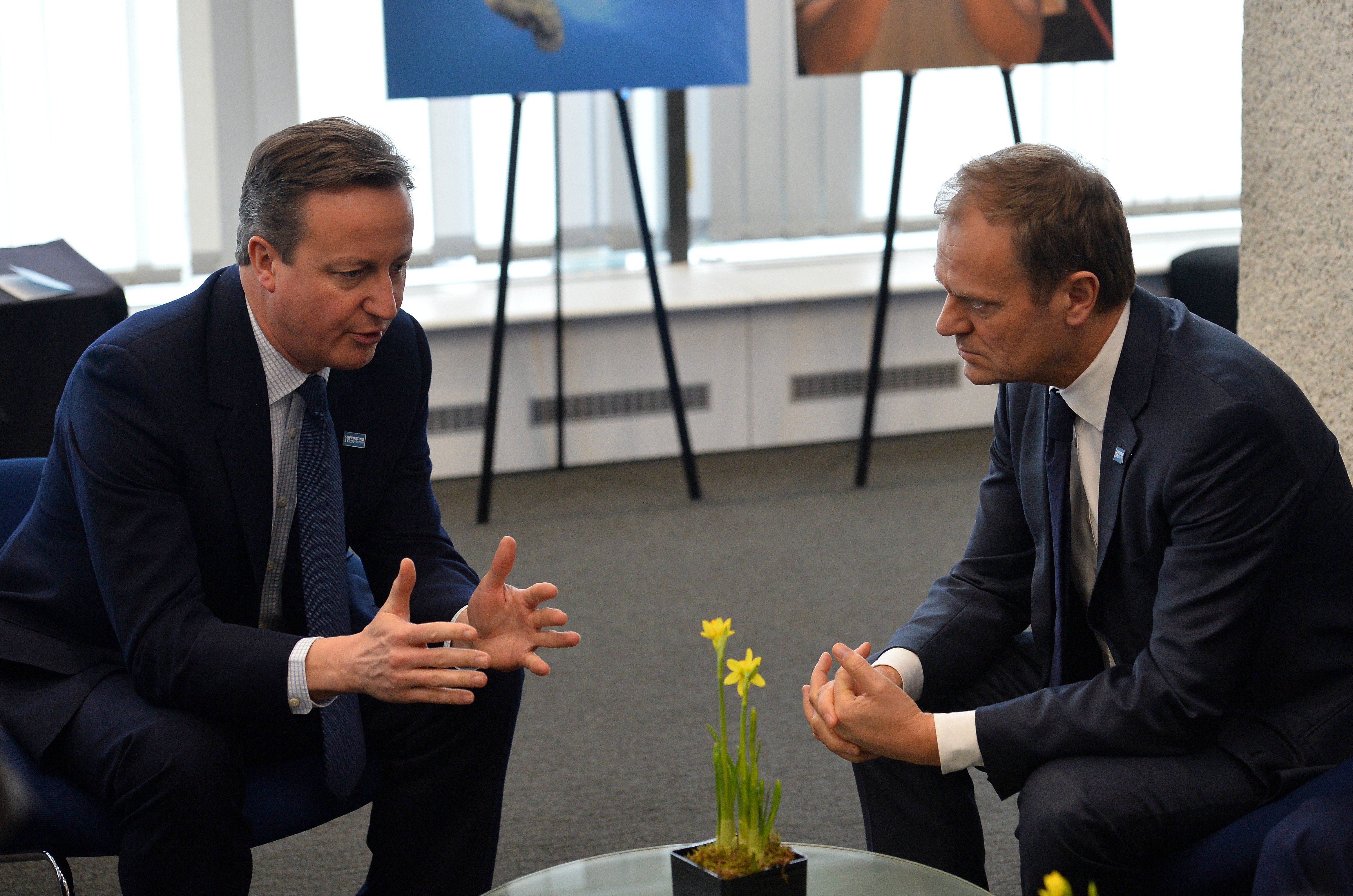 Tusk said that the mechanism requested by Cameron to protect the single market "remains to be discussed". [CONSILIUM]

The eurozone’s members and non-members have worked well in the past – but it remains unclear how to safeguard the single market against the deepening of the euro.

The British Prime Minister, David Cameron, included as one of his flagship priorities to renegotiate the UK’s position in the EU safeguards “to protect the single market for Britain and for others outside the eurozone”.

But – in contrast with his demand to cut the benefits of EU workers in the UK – his plea to better protect the single market is forward-looking.

Various expert sources from the financial sector told euractiv.com that the relationship between the eurozone’s ins and outs has not provoked any major issue to date. “We have not seen many problems in the past”, Sebastien de Brouwer, Executive Director in charge of Legal, Retail, Economic and Social Affairs at the European Banking Federation.

From the insurers’ perspective, the closer relation forged between the euro partners since the height of the financial crisis has not raised any concerns, a source said on condition of anonymity.

Thinktanks agree with this assessment.  “Having the euro and other currencies has not undermined the single market so far,” concluded a recent paper published by Bruegel.

Several decisions helped to iron out differences between the UK and the eurozone partners in areas where some friction had started to emerge.

First among them was the banking union. London was concerned about the risk of being outvoted by the eurozone members in the European Banking Authority, an EU supervisory authority, as all the euro partners were more closely interlinked under the Single Supervisory Mechanism (SSM), one of the pillars of the banking union.

The member states agreed on amending the EBA’s voting rules to accommodate the UK’s concerns. The aim was to ensure a “level playing field” between the countries under the authority of the SSM and those outside, and to avoid harm to the single market. The new voting system stipulated that a qualified majority must contain at least a simple majority of members from participating and non-participating member states respectively.

Another important victory for London was the European Court of Justice’s ruling on clearing houses. The ECB said that these institutions, which ensure a smooth completion of transactions of stocks and other assets, should be based in the eurozone if they handle more than €5 billion of euro-denominated securities.

This would have represented a serious blow for the City of London as a trading centre of euro-denominated assets.

However, the EU’s High Court ruled that the ECB had not “the necessary competence” to impose this requirement.

For pundits in the UK, the EU court´s verdict underlined that “the single market must be respected and begins to set limits for eurozone action”, said Raoul Ruparel, co-director of Open Europe.

Time to shield the single market

“We want to make sure that these changes will respect the integrity of the single market, and the legitimate interests of non-euro members”, Cameron said in his letter last November. Although he was not looking for a “veto” he called for “legally binding principles” and a “safeguard mechanism” to ensure that these principles are respected.

Experts agree that this mechanism should come “soon rather than later”.

“Without such agreements, significant economic conflicts could emerge from governance decisions and policy divergence in a deepening single market in the euro area,” the Bruegel report said.

For the EU institutions it remains an open question what mechanism could ensure both the protection of interests of the minority of non-eurozone members and also avoid any veto threat of this minority on the eurozone members.

In his response to Cameron’s demands, Donald Tusk wrote that the conditions to trigger this mechanism to settle disputes “remain to be further discussed”.

As a potential arbitration body, some reputable voices such as Jean-Claude Piris have suggested the European Court of Justice, an idea that would find little sympathy in London. An alternative could be the European Council, as was suggested in Tusk’s letter.

In the meantime, Wolff said some steps could be taken to improve the working relation between the euro and non-euro members. One possibility is to schedule the eurozone finance ministers’ meeting (the Eurogroup) only after all the EU finance ministers (Ecofin) have met, instead of the other way around as currently happens.

“It would be a very practical change but a relevant one, because an important number of issues discussed in the Ecofin has been already discussed and even agreed on during the Eurogroup”, he said.

This proposal was initially suggested by Jean Pisany-Ferry, advisor to the French Prime Minister Manuel Valls.

But this option may find difficulty in gaining traction. A senior EU official described the current system as “stable” and said that no proposal has been made so far to alter the status quo.

Sebastien de Brouwer, Executive Director in charge of Legal, Retail, Economic and Social Affairs at the European Banking Federation underlined that the federation has repeatedly called for a single rulebook across the whole EU to preserve the single market.

The British Bankers' Association said: “The single market is the European Union's greatest asset and is of crucial importance to the banking and financial services industry in the UK. We are clear that we want the UK to remain an active participant in the single market, helping to write the rules and push for greater trade and economic growth.”

The UK is trying to shield the single market against the new proposals expected after 2017 to strengthen the economic and monetary union (EMU) as was foreseen by the so-called Five Presidents’ Report.

These measures will have “direct implications for the single market in terms of banking, capital markets and labour markets”, the Bruegel report warned. A deeper level of economic integration in these three areas is essential for a well-functioning monetary union.

By 2025, the time horizon for completing economic and monetary union envisaged by the Five Presidents’ Report, the UK could be one of the very few countries outside the euro, if not the only one.

In fact, the UK is the only country that has not signed any of the three intergovernmental agreements drafted in the aftermath of the crisis to strengthen EMU.

If a treaty change occurs within a decade, the ‘Pandora’s box would be opened”, Bruegel’s Guntram Wolff warned. The new treaty could consolidate the ‘two-speed Europe’, with a core group of eurozone members equipped with new competences in the fiscal and political front, and a withdrawal of the non-eurozone members from some EU fields, including budget or migration.