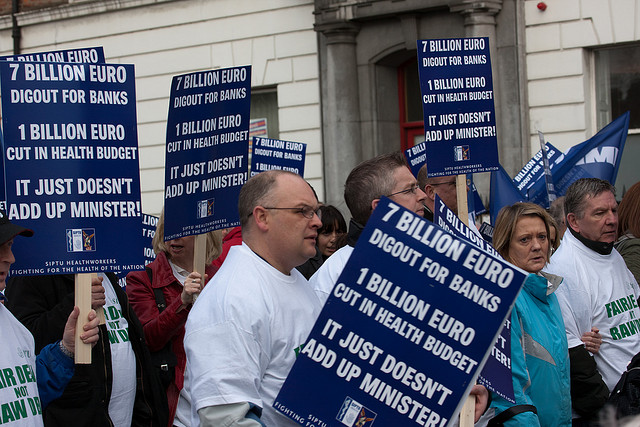 A February 2009 protest in Dublin during the banking crisis. Ireland would become the first eurozone country to emerge from its EU/IMF bailout. [William Murphy/Flickr]

European Union officials support Ireland’s request to be allowed to pay back early the International Monetary Fund’s part of its bailout because of the money it would save Dublin, a senior EU official said on Monday (8 September).

In late 2010, Ireland borrowed money from both the IMF and the European Union to avoid bankruptcy after it was cut off from market financing.

The eurozone nation returned to markets after its programme ended in December, and the cost of replying the IMF is now higher than borrowing from the European Union, and from markets.

Ireland’s loans to the IMF carry an interest rate of almost 5%, while the cost of borrowing on financial markets is less than 2%. Low bond yields have been helped by investor expectations of a US-style bond-buying programme by the European Central Bank to revive the eurozone economy.

But under Ireland’s bailout deal, if Dublin wants to pay off any of the loans early, it has to pay back all lenders, not just one, unless the others agree.

A senior EU official involved in the talks said the signs of reaching agreement were high.

European Union finance ministers will discuss the issue on Friday (12 September) at their informal meeting in Milan. Germany and France are working on joint proposals for increasing investment in the EU, which they plan to present to the ministers (see section below).

Finance Minister Michael Noonan, who will put his proposal to senior European Commission officials in Brussels later on Monday, has said he would target the €18 billion of the €22 billion owed to the IMF.

Noonan would look to refinance it in three €5 billion tranches, beginning before the end of the year.

The repayment concessions so far granted by Europe are part of Ireland’s strategy to even out the repayment schedule of a national debt that it believes peaked at 116% of gross domestic product (GDP) last year.

The senior EU official said if agreed, Ireland’s early payback to the IMF would set a precedent for other countries to follow. Portugal also ended its bailout programme this year.

“There has been no communication with Portuguese authorities on this, but it is quite logical that you would start thinking about this,” the official said. “The results of Ireland will set an important precedent for other countries.”

A German finance ministry spokeswoman said on Monday that the German and French finance ministers were working on a joint discussion paper for increasing investment.

It will include proposals on how to tap private capital as part of an EU effort to improve economic activity and job creation, the spokeswoman, Marianne Kothe, told reporters.

“We want to boost investment – not just public investment, but private investment is also an important factor,” she said.

Kothe described the paper by Germany’s Wolfgang Schäuble and France’s Michel Sapin as an attempt “to explain how we can boost investment nationally and internationally, which is an important issue for Europe”.

She singled out infrastructure as an area where private investment could be mobilised.

News of Germany’s biggest budget surplus since unification in the first half of 2014 contrasted its healthy finances with those of its neighbours and put more pressure on Schäuble.

But he is resisting calls to give Europe states more fiscal leeway to help re-start growth, and seems sceptical that public spending or loose monetary policy are the answers to what he has acknowledged is a lack of investment in Europe.

Last week, Schaeuble came out in support of French President François Hollande’s call for greater investment, but the German minister did not back French calls for a weaker euro, saying it is up to markets to set exchange rates.

Ireland said in November 2013 it would make a clean break from its EU/IMF bailout in December, forgoing a precautionary credit line that some of its European partners had wanted it to take.

Ireland's "troika" of international lenders - the European Commission, European Central Bank and International Monetary Fund - signed off on the last part of the €85 billion aid programme in early November, paving the way for Ireland to complete it by the end of the year.

The country is the first in the eurozone to emerge from bailouts that were needed after the global financial crisis.