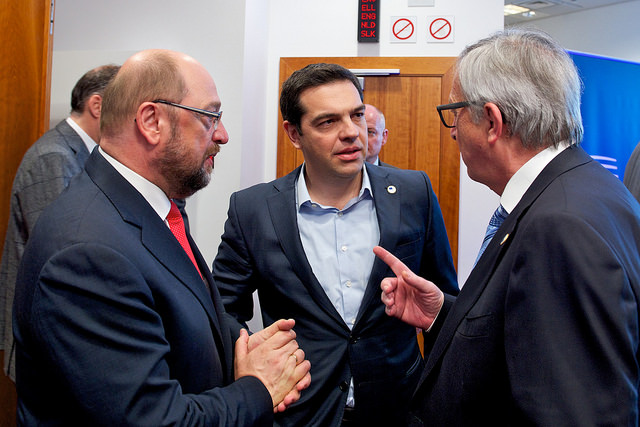 European Union officials on Tuesday (9 June) swiftly dismissed new Greek promises of economic reform, saying the proposals were not enough to unlock funds that Athens urgently needs to avoid defaulting on its debts.

Despite signs that Prime Minister Alexis Tsipras is adopting a more conciliatory line as time runs short for a deal, the officials in Brussels were quick to declare that Greece’s international lenders would not accept the latest proposals on tax, debt and the budget.

The chief spokesman for the European Commission said the EU executive was still studying the suggestions and stressed that other officials do not speak for the Commission.

But the EU officials passed judgment only hours after Athens announced it had sent the plan to Brussels. “What has been submitted is not sufficient to move the process forward,” said one EU official. Another said it was “not sufficient and not acceptable to member states”.

A source then said Greece was working to revise the proposals.

Athens would talk with creditors on Tuesday with the aim of narrowing differences so Tsipras can finalise a deal at a meeting in Brussels on Wednesday, the source close to the talks said.

Frustration is growing among Greece’s fellow eurozone members who have footed a large part of the €240 billion bill for bailing out Athens since it sank into a debt crisis in 2010.

“We will do everything to keep Greece in the eurozone […] but our patience is running out,” Finnish Finance Minister Alexander Stubb said.

The proposals sent to Brussels had marked a further attempt by Tsipras to compromise with EU and IMF lenders as time runs out to reach a deal to prevent his country going bankrupt.

The leftist Greek leader, who will meet German Chancellor Angela Merkel and French President François Hollande on Wednesday, agreed to further raise value-added tax rates and proposed higher budget surplus targets to bridge the gap with the creditors. The Greek stock market rose 2% on hopes a deal was near.

European leaders led by Merkel have stressed the urgent need for a settlement. The bailout programme with the EU and International Monetary Fund expires at the end of this month, and Athens must make big debt repayments to the IMF by then that will probably be impossible without funds from its creditors.

Default would endanger Greece’s future in the eurozone, but Tsipras has to win over not only the lenders but also members of his Syriza party who are resolutely opposed to the punishing austerity terms that the EU and IMF have insisted on in return for bailout funds.

Tsipras is due meet Syriza’s political secretariat later on Tuesday. This committee has members from the wide range of factions within the party, ranging from pro-Europeans to hardline communists.

Only last week, Tsipras dismissed as absurd the creditors’ most recent cash-for-reform offer, but on Tuesday he offered hope that his counter-proposal would seal a deal, and warned the cost of failure would be enormous.

Signalling room for compromise, he singled out Greece’s budget surplus before its debt repayments, which Athens wants to keep as low as possible to free up funds to help a population that has suffered badly during five years of economic crisis. But he showed no sign of yielding to the creditors’ demands that Athens cut pensions.

“I think we’re very close to an agreement on the primary surplus for the next few years,” he told Italy’s Corriere della Sera newspaper. “There just needs to be a positive attitude on alternative proposals to cuts to pensions or the imposition of recessionary measures.”

Since Syriza won elections earlier this year, Tsipras has repeatedly denounced the futility of imposing waves of austerity on a country whose economy has already shrunk by a quarter, radically reducing living standards and sending unemployment soaring.

But Greece has received nothing from its creditors since last August and they are unwilling to release the remaining bailout funds without Athens making the reforms that they believe are essential if it is to stand on its own two feet.

Tsipras warned against assuming that if Greece defaults it could be allowed to fall out of the eurozone without profound consequences. “It would be the beginning of the end of the eurozone,” he said. “If Greece fails, the markets will immediately go to look for the next one. If negotiations fail, the cost for European taxpayers would be enormous.”

He also ruled out the option of early elections to end the standoff with lenders, saying, “I don’t expect or want elections […] we won’t betray the Greek people.”

Taxpayers in Germany, the biggest contributor to Greece’s €240 billion euro bailouts, are particularly hostile to helping Athens. The European Central Bank said on Monday that Greece could have only a minimal effect on the eurozone due to its small size and the fact that the bloc has erected financial “firewalls” to stop the spread of crises.

However, some economists agree with Tsipras’s view that a Greek exit would only encourage speculation on financial markets about who was next to leave, meaning more countries might have to be bailed out.

Germany and Greece are still some distance apart on a possible compromise between Greece and its creditors to keep the country from default, German Finance Minister Wolfgang Schaeuble said.

“My Greek counterpart is hard work,” Schaeuble told a German economic conference in Berlin on Tuesday after a meeting with Greek Finance Minister Yanis Varoufakis on Monday. “We were together yesterday […] we had differing views.”

“The ball is in Greece’s court,” he added.