Eurogroup continues talks on Greek ‘Plan B’ without Varoufakis 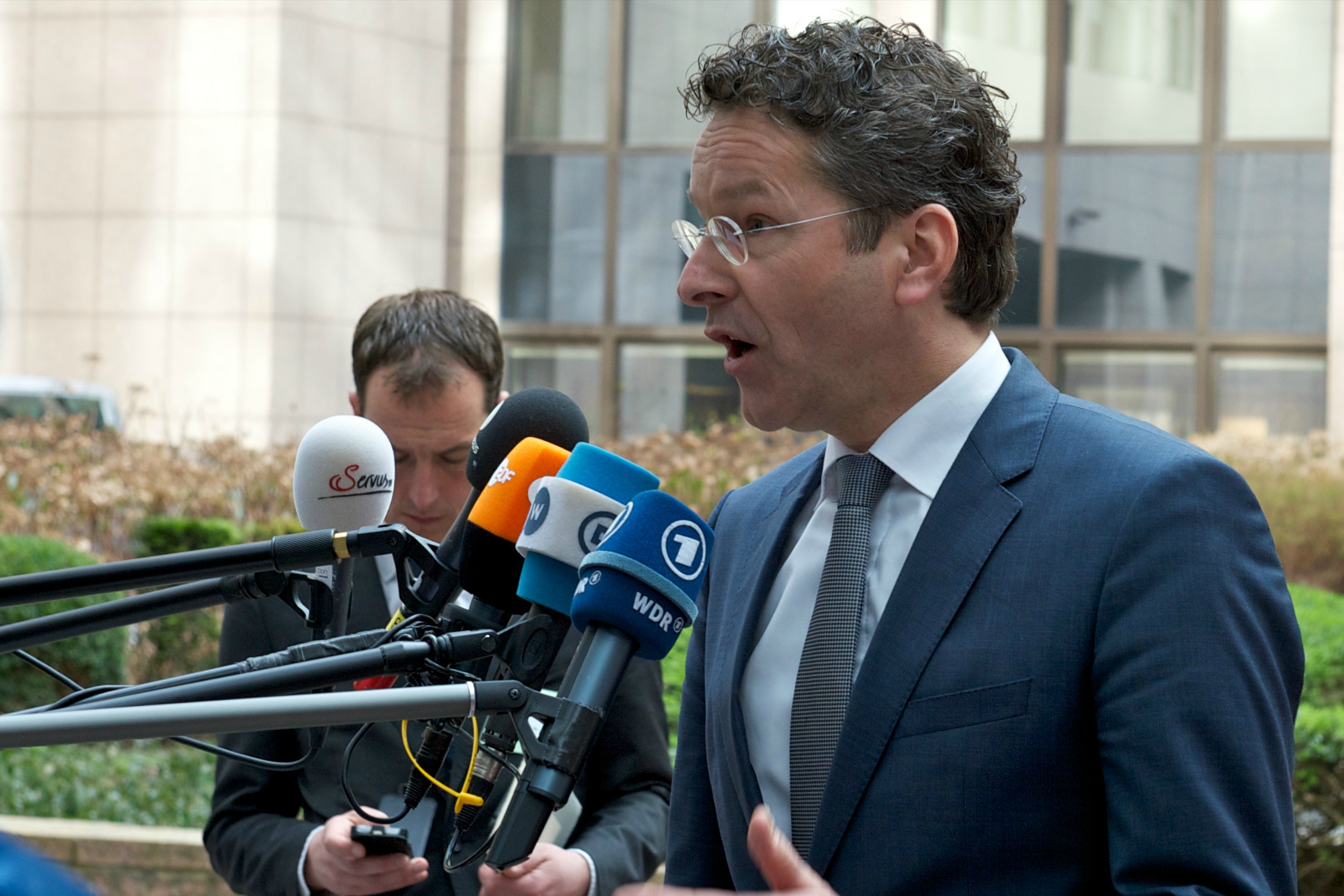 Eurozone ministers on Saturday (27 June) rejected extending the Greek bailout programme, which expires on Tuesday (30 June). They said Prime Minister Alexis Tsipras reacted “negatively” by calling a referendum on the creditors’ proposal and by recommending a ‘No’ vote.

After about three hours of talks, Eurogroup President Jeroen Dijsselbloem gave a press conference saying that the extraordinary Eurogroup meeting would conclude with a document which 18 eurozone finance ministers could accept, except Greek Finance Minister Yanis Varoufakis.

“Regrettably, despite efforts at all levels and full support of the Eurogroup, this proposal has been rejected by the Greek authorities who broke off the programme negotiations late on the 26 June unilaterally,” the document read, referring to Friday night when Tsipras called a referendum on the creditors’ proposal on 5 July.

Dijsselbloem said the Eurogroup meeting would “continue to discuss the further consequences of the conclusion and how to keep the stability in the eurozone at a high level”. Varoufakis would not take part, he indicated.

“Even if the outcome of the referendum is a ‘yes’, there are major problems for Greece in the meantime. This is a big problem of risk management for the Greek government to think about. Then afterwards, who can we then trust to implement that programme? Those are two major questions in that scenario. The programme expires and that is absolutely clear at the moment,” he stated.

Varoufakis left the Eurogroup blaming the creditors for backtracking from previous agreements and rejecting his government’s proposal to extend the current bailout until 5 July and prolong it for a few weeks later should the vote end with a ‘Yes’.

Varoufakis said the creditors’ proposal did not give any hope for investors and creditors. “Instead, it was punctuated by one review after the other, every few weeks, leading to an end sometime in November-December, without anything inside, that we would be exactly in the same negotiation again with the threat of impasse, deterring investors from what we need which is to invest,” Varoufakis said.

He explained that he did not have a mandate for a “non-viable, unsustainable” proposal but that his government didn’t have a mandate to reject the institutions’ proposal either without consulting the people of Greece through a referendum.

Varoufakis added that collectively, the Syriza-led government won 36% of the vote in the Greek general election in January, but for a momentous decision like the creditors’ proposal, a backing by more than 50% of Greeks was needed.

“The Eurogroup refused today to endorse our request for an extension of this agreement for a few days, for a couple of weeks, so as to allow the Greek people to deliver their verdict on the institutions’ proposal, especially given that there is a very high probability that Greeks will go against our recommendation, voting in favour of the institutions’ proposal,” Varoufakis stated.

“That refusal will certainly damage the credibility of the Eurogroup as a democratic union of partner member states, and I’m very much afraid that that damage will be permanent,” the Greek finance minister continued.

The doorstep statements of finance ministers ahead of the Eurogroup meeting were already very negative with some stating that Tsipras had pushed forward a “Plan B” by announcing the referendum.

Jeroen Dijsselbloem, the Eurogroup President, said he was “very negatively surprised” by the decision by the Greek government to hold a referendum.

He said that by announcing the referendum, the Greeks had ultimately rejected the last proposal on the table from its creditors – the International Monetary Fund (IMF), the European Central Bank (ECB) and the European Commission.

“That is a sad decision for Greece because it has closed the door for further talks where the doors were still open in my mind. We will hear from the Greek minister today, and then talk about the consequences,” Dijsselbloem said.

Tsipras called a referendum on bailout demands from the foreign creditors early Saturday (27 June), rejecting an “ultimatum” from lenders and putting a deal that could determine Greece’s future in Europe to a risky popular vote.

After a week of almost non-stop talks in Brussels, where Tsipras dismissed proposals from the lenders as “blackmail”, he said the Greek parliament would meet on Saturday to approve the referendum, to be held on 5 July.

The Finnish Finance Minister Alexander Stubb said that Greece could now no longer expect an extention of its current bailout programme, a proposal the creditors made on Friday. German Chancellor Angela Merkel had called this offer “exceptionally generous.”

Plan B is Plan A

“I think as an avid pro-European that yesterday’s announcement of the referendum was an unpleasant surprise and I feel quite sad about the situation from the perspective of the Greek people,” Stubb said.

“I think Plan B is now fast becoming Plan A,” Stubb said, referring to eurozone finance ministers’ new way of talking about a Greek economic default.

Asked about whether an extension of the Greece’s bailout would also now be out of the question, Schäuble replied, “Yes.”

Ireland’s Michael Noonan said that he also found the Greek referendum surprising. While he had originally hoped for a good solution on Saturday night, he no longer thought this could happen.

Slovakia’s Peter Kažimír gave a short Eurogroup doorstep statement, saying that the Greeks “always knew how to create drama” and he expected “just another lecturing from Yanis Varoufakis”, the Greek finance minister.

The anti-austerity party Syriza won an overwhelming victory in the Greek elections on January 25, but failed to obtain an absolute parliamentary majority.

The party leader Alexis Tsipras provoked mixed reactions among his EU counterparts, announcing that the "vicious cycle of austerity is over".

Reforms offered by Athens have failed to convince the Eurogroup and the country's creditors, and Greece now finds itself unable to pay its debts and in a more precarious situation than ever.

The proposals were a bid to unlock the final €7.2 billion tranche of its international bailout, which creditors have refused to release unless Greece agrees to more austerity measures. Greek Prime Minister Tsipras was elected promising to end five years of austerity.

Without the bailout cash Greece will be unable to meet a €1.5 billion International Monetary Fund (IMF) payment on Wednesday (30 June), and a default could send Athens crashing out of the single currency and possibly the EU.