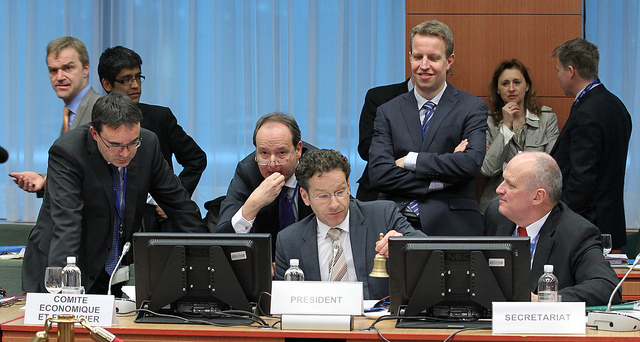 Eurozone finance ministers agreed yesterday (3 July) to release €1billion in bailout loans to Greece in a conference call ahead of Monday’s Eurogroup meeting in Brussels.

The €1 billion is part of a €8.3 billion loan from the European Financial Stability Facility to help the debt strapped country. Its release was on condition Greece met six commitments.

€6.3 billion was released at the end of April. The final €1 billion is dependent on a second set of milestones. Greek diplomats assured the ministers they would be met by the end of this month.

Once that happens, the fifth review of Greece’s bailout plan will begin. A team of experts is travelling to Greece next week to prepare the groundwork for the review.

The review, which will spark negotiations over the next bailout terms and conditions, is expected to start in September, an EU official said.

The time it takes would impact on discussions over new debt relief measures for Greece, which has just finished its term holding the six-month rotating presidency of the EU.

The conditions met related to the adoption of outdoor trading measures and those relating to investment licensing law and planning law. A list of nuisance charges was created with a website for consumers to draw attention to them. A government code of conduct was created.

A memorandum of understanding was signed implementing debt reduction into tax administration and measures against the mark-ups of pharmaceuticals sold in Greece were also brought in.

In April, European officials confirmed that Greece will obtain more debt relief from its international lenders after meeting fiscal targets and achieving a budget surplus.

>> Read: Debt relief for Greece on table as EU economic growth picks up

The surplus of €1.5 billion is the first since 2002 and came a year ahead of schedule. Greece also returned to the bond market, ending a four-year exile from financial markets.

11 of the 18 countries have recommendations to fulfill as part of the Stability and Growth Pact.  The pact is an agreement to coordinate financial policy in the EU.

The dominant theme of discussion will be how to shift taxes away from labour to increase employment.

The pact’s targets must still be respected, said an EU official, who pointed out that taxes were raised across the board to aid fiscal consolidation.

Italian prime minister Matteo Renzi, whose country has taken over the EU’s rotating policy, has called for the pact to be changed.

Spain’s finance minister Luis de Guindos is expected to outline recent tax reform measures in his country, EU officials said. Other ministers will describe the national debates and concerns over how and what to shift the tax burden from labour to.