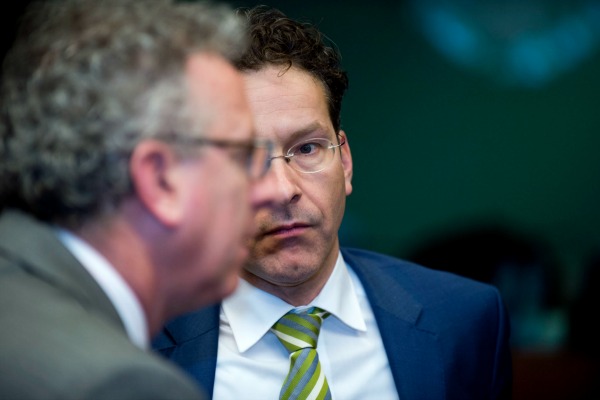 Euro zone governments edged closer on Monday (10 March) towards a deal on how to wind down failing banks. More negotiations will take place on Tuesday to address demands of the European Parliament.

Negotiations are set to last until Wednesday, and may be the final step in a European banking union that would mean one supervisor for euro zone banks, one set of rules to close or restructure those in trouble, and one pot of money to pay for it.

The role of euro zone bank supervisor has already been assigned to the European Central Bank, which will take up its new duties in November.

Talks on a new European agency to shut down failing banks, and on a fund to pay for such closures which together are to form a Single Resolution Mechanism (SRM), need to be concluded before the last sitting of the European Parliament in mid-April.

Failure to do so would delay the law by at least seven months, if not more.

"Most importantly, tonight's meeting confirmed that all participants, including the European Parliament representatives, want to reach a final agreement on the SRM package by the end of March, in time for the end of the current term of the parliament," said Jeroen Dijsselbloem, who chaired Monday's meeting of euro zone ministers.

Dijsselbloem said finance ministers from the 18 countries sharing the euro discussed various details of the resolution mechanism, but reached no conclusions, as all the key issues would be addressed again when the EU's 28 ministers sit down for negotiations on Tuesday.

The banking union, and the clean-up of banks' books that will accompany it, is intended to restore banks' confidence in one another, and boost lending across the currency bloc, helping foster growth in the 18 economies that use the euro.

"This is a large scale political project which will allow countries to borrow at the same rate, whether you are Spanish, Italian, German or French," said French Finance Minister Pierre Moscovici.

New lending has been throttled by banks' efforts to raise capital and cut their risks in recession, especially in countries hit the hardest by the sovereign debt crisis.

The banking union is supposed to break the vicious circle of indebted states and the banks that buy their debt, treated in law as 'risk-free' despite Greece's default in all but name.

Euro zone banks now hold about €1.75 trillion of government debt, equivalent to 5.7% of their assets, and the highest relative exposure since 2006, according to the European Central Bank. In Italy and Spain, roughly one in every €10 in the banking system is now on loan to governments.

The biggest political reform since the launch of the euro currency, banking union also touches on sensitive issues for investors, including the imposition of losses on bondholders of failing banks.

In return for giving its blessing to the wider scheme, Germany wants to see losses imposed on bondholders and others who have backed troubled banks from November.

European governments disagree not only amongst themselves on the details of the plan, but also with the European Parliament, which must give its blessing before the project can become law.

At the heart of the dispute is the complex process of closing a bank. Countries are reluctant to cede authority to Brussels, and want a laborious system of checks before any decision to shut a bank can be taken.

EU finance ministers agreed in early December that a decision on closing down a bank in the euro zone would be taken by the board of the resolution agency, but that the decision must then be approved by the finance ministers.

If the ministers want to change the board's decision, they have to involve the European Commission and start a procedure so complex that it is doubtful it can be completed quickly.

The European Parliament, on the other hand, does not want EU ministers invoved, arguing that this would politicise the process, and makes it cumbersome. It wants to leave the final go-ahead to the more impartial European Commission.

Parliament also wants the ECB to be the only institution to declare bank failures. EU governments want the agency board, and national authorities to have a say.

Governments and parliamentarians also disagree on how quickly to build up the 'resolution' fund, used to cover the costs of shutting a bank, and how soon countries should be able to dip into the pot. The fund will be filled by euro zone banks, and is slated to reach around €55 billion.

Governments want the fund to reach full size over 10 years, while the parliament wants the fund to be fully available to all euro zone countries after just three years.

Finally, policymakers must decide if they will allow this fund to borrow if it is short of cash, if it should borrow from the euro zone bailout fund, or receive state guarantees.

A new milestone in the EU’s efforts was reached in June 2013 when finance ministers struck an agreement on banking union that would force investors and wealthy savers to share the costs of future bank failures – or so-called ‘bail in’ – to shield taxpayers from unpopular bank bailouts.