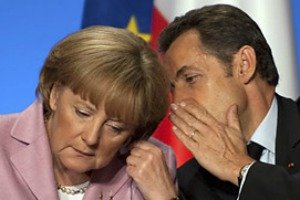 German and French officials have discussed plans for a radical overhaul of the European Union that would involve setting up a more integrated and potentially smaller eurozone, EU sources say. In the meantime Commission President José Manuel Barroso warned about the financial cost of breaking up the Union.

France and Germany have had intense consultations on the issue of setting up a smaller eurozone over the last months, "at all levels", a senior EU official in Brussels told Reuters, speaking on condition of anonymity because of the sensitivity of the discussions.

"We need to move very cautiously, but the truth is that we need to establish exactly the list of those who don't want to be part of the club and those who simply cannot be part," the official said.

The discussions among senior policymakers in Paris, Berlin and Brussels raised the possibility of one or more countries leaving the eurozone while the remaining core pushes on toward deeper economic integration, including on tax and fiscal policy.

The change has been discussed on an "intellectual" level but had not moved to operational or technical discussions, the EU official said.

Italy at the breaking point

While Greece is still struggling to form an interim government, Italian borrowing costs reached the breaking point yesterday (9 November) after Prime Minister Silvio Berlusconi's insistence on elections instead of an interim government threatened prolonged instability and kindled fears of a eurozone split.

Yields of 10-year Italian bonds surged well above 7% – a level that many economists see as unsustainable.

The eurozone has no plans for a financial rescue of Italy, eurozone officials said yesterday.

The eurozone bailout fund, or European Financial Stability Facility (EFSF), will be able to extend such a precautionary credit line to countries that may be cut off from markets, once eurozone finance ministers agree on technical and legal details of the operation by the end of November.

But the size of the potential bailout for Italy, which needs to repay €326 billion in maturing debt in the next 12 months, is too big to handle for the EFSF.

It would be up to Italy to reassure investors that it would pay back what it borrowed, the official said.

A senior eurozone diplomat said eurozone countries were hoping that the European Central Bank (ECB) would support Italy, as there was no alternative.

The ECB aggressively bought Italian bonds on the market yesterday, focussing on 2-year and 10-year maturities to halt the rise of Italian borrowing costs, traders said.

German Chancellor Angela Merkel said on Wednesday in some of her most dramatic rhetoric since the eurozone crisis erupted two years ago that it was high time for Europe to achieve a "breakthrough" on changes to its ground rules.

Speaking at a conference in Berlin on the occasion of the 22nd anniversary of the fall of the Berlin Wall, Merkel said the situation in Europe had become "unpleasant".

"A community that says, regardless of what happens in the rest of the world, that it can never again change its ground rules, that community simply can't survive. I'm convinced of this."

"Because the world is changing so much, we must be prepared to answer the challenges. That will mean more Europe, not less Europe," Merkel said.

Bloomberg quoted a senior member of Merkel's Christian Democratic Union (CDU) as saying that the party would initiate a motion to allow euro members to exit the currency area.

"This motion will go through, I am sure of it," Norbert Barthle, a CDU lawmaker from the parliament's budget committee said late yesterday. "Any country that wants to leave the euro on its own should not be prevented from doing so."

"The aim is to keep the eurozone together, with all the 17 participants on board," he said during a visit to Switzerland on Wednesday, where he met President Micheline Calmy-Rey.

Speaking in Berlin at the Berlin Wall anniversary, European Commission President José Manuel Barroso warned about the financial cost of a breakup of the Union.

"Were the euro area or the European Union to break apart, the costs have been estimated at up to 50% of GDP in an initial phase. It is estimated that Germany's GDP would contract by 3% and it would lose one million jobs if the euro area were to shrink to a few core member countries," Barroso said.

The Commission president admitted that the Union needed an overhaul and even changes in its treaties. However, he advocated against a two-speed Europe.

"In the upcoming discussions regarding the deepening of European integration, including through possible changes to the European Union treaties, the Commission will steadfastly uphold its role as guarantor of the interests of the European common good, the general interest of Europe, including of course the interest of all our member states. And we will defend the integrity of the single market and the integrity of the single currency."

"The EU as a whole and the euro area belong together and should not be divided," Barroso said.

Ireland does not see any risk that the eurozone will break apart, Deputy Prime Minister Eamon Gilmore said yesterday.

"We don't think it will come to that as there is a firm determination in Europe that the euro will continue and that whatever steps are necessary will be taken," Gilmore told state broadcaster RTE.

Pressed as to whether refusing to prepare a contingency plan would put Ireland in danger, Gilmore suggested that talking about that possibility could increase the likelihood of the euro's demise.

"We are not going to talk ourselves into a situation of the euro breaking apart. We believe that that situation will not arise," he said.

Former German foreign minister Joschka Fischer, a longtime supporter of European integration, said in a newspaper interview that the 27-nation EU was too unwieldy and that it was time to think about forming a smaller group capable of pursuing needed reforms.

"Let's just forget about the EU with 27 members - unfortunately," Fischer said in an interview with the German weekly newspaper Die Zeit. "I just don't see how these 27 states will ever come up with any meaningful reforms."

"What we need now is a 10-point plan for Europe, for a political union," Fischer said, adding was heading towards a "transfer union" in the future in which wealthier nations would provide assistance to the less prosperous.

Eurointelligence, an internet-based service providing commentary and analysis of the eurozone, pointed to the rising spreads on Italian, Spanish and French bonds, and said even a leveraged EU bailout fund will not be enough to stop the contagion from spreading.

"The eurozone’s latest 'comprehensive solution' collapsed yesterday, as all the technical quick-fixes did before. We have now reached the bifurcation point in the crisis where the eurozone will, within days, have to make a choice between debt monetisation, which is hardly feasible without a political commitment to a fiscal union, and a break-up. The latter will happen if no decision is taken."

While talks among the EU27 were relatively brief, the 17 leaders of the eurozone negotiated between themselves and bankers long into the night, concluding the next day around 4 am.

The compromise deal included a 50% 'haircut' for Greek bondholders amounting to €100 billion, an increase of the European Financial Stability Fund (EFSF) from €440 billion to around €1 trillion, and an agreement that European banks must have core capital reserves of 9%.

But then the Greek Prime Minister George Papandreou stunned his colleagues and sent a wave of panic across Europe and the world, by announcing a referendum on the summit deal on Greece. Four days later, Papandreou agreed to resign, opening the way to an interim government of national unity. Early elections are due in February.

On 8 November, Berlusconi announced he would step down, having lost his majority in Parliament. However, the exit of the 75-year-old Berlusconi from the Italian political scene which he largely dominated over the last 17 years does not necessarily augur a quick fix for the country's problems [See more information].