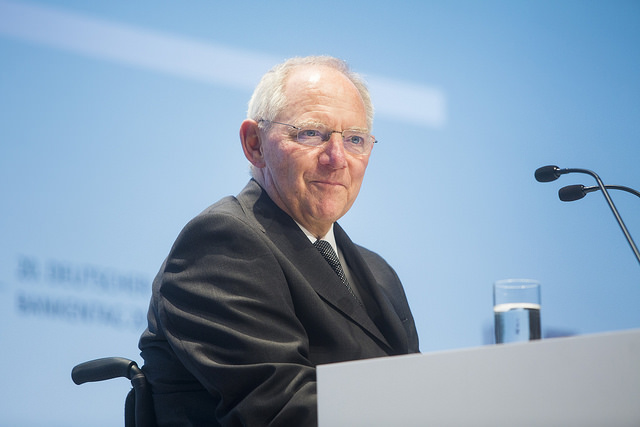 Eurozone finance ministers are set to meet this afternoon (14 August) to decide on a new bailout for Greece, after Greek lawmakers approved the third package since 2010 this morning following an all-night debate.

The Greek parliament vote came ahead of a meeting of eurozone finance ministers where they are expected to issue their verdict on the draft deal reached by Athens and its creditors after weeks of negotiations — and despite Germany saying it needs further clarifications from Greece before giving the deal the nod.

“I must go to the Eurogroup tomorrow with the deal approved (by parliament),” Finance Minister Euclid Tsakalotos told the chamber.

Greek Prime Minister Alexis Tsipras faced opposition to the bailout package from within his Syriza party ahead of the vote this morning. The debate itself was preceded by hours of often angry exchanges in parliament. Tempers flared during the nightlong debate, with the leader of conservative opposition party New Democracy accusing Finance Minister Euclid Tsakalotos of making “provocative” comments. Vangelis Meimarakis warned Tsakalotos not to take his party’s support for the bailout for granted.

Tsipras needed MPs to vote for a Memorandum of Understanding (MoU) to be adopted before eurozone ministers can endorse the draft deal worth about €85bn. Exhausted lawmakers held the vote shortly after 7:00 am (0400 GMT).

Greece hopes that by quickly adopting the rescue plan negotiated with EU institutions it can unlock a first tranche of aid before a €3.4 billion repayment to the ECB falls due on 20 August.

Failing an agreement by then, Greece would need to secure more emergency funding to avoid a payment default.

Finland on Thursday was the first eurozone peer to give its approval, with the proviso of numerous preconditions. “There are 47 preconditions outlined by the ‘troika’ to the approval of the first payment,” said Finnish Finance Minister Alexander Stubb, referring to Greece’s three creditors.

The deal was agreed to at a first stage by Greek and EU negotiators on Tuesday (11 August) and means major reforms to Greece’s social welfare, tax and healthcare systems, which are controversial with Syriza supporters.

The European Commission, the International Monetary Fund, the European Central Bank, and the European Stability Mechanism, the EU’s bailout fund, took part in late-night negotiations with the Greek government earlier this week to nail down details on the bailout.

European Commission spokesperson Annika Breidthardt said yesterday, “It is now in the hands of the eurozone finance ministers to take the final decisions on this.”

Greece’s debt is now more than 175% of the country’s GDP.

A document prepared by the European Commission, the ECB and the ESM showed that those institutions still have concerns that the deal wouldn’t do enough to slash Greece’s debt, the Wall Street Journal reported yesterday.

European Commissioner for the Euro and Social Dialogue, Valdis Dombrovskis, was named as the Commission’s representative at the meeting, set to start at 3 pm.

The European Commission announced on Thursday that it completed the legal ground work for the bailout deal as part of a new ESM funding scheme.

Bundestag President Norbert Lammert said yesterday that if the finance ministers approve the deal, the Bundestag would next convene for a vote on Tuesday or Wednesday. If the ministers don’t agree, the Bundestag’s budget committee would meet to discuss Greece’s situation, Lammert told the Münchener Merkur.

However, more than half of Germans are opposed to a planned third bailout for Greece and the vast majority do not believe the Greek government will implement economic reforms, a survey by Forsa for newspaper Handelsblatt showed on Thursday. Just over a third of the 1,002 people polled thought it was right to support Greece with a new aid programme. But 57% were against a further rescue programme and 84% said they did not believe the government in Athens would carry out reforms.

The Forsa poll also showed that 47% of Germans preferred Finance Minister Wolfgang Schaeuble’s hardline stance on bailout negotiations with Greece to that of Chancellor Angela Merkel, whose more conciliatory approach was favoured by 41% of those polled.

Some EU officials have been wary of the bailout package and reportedly want a bridge deal to give Greece temporary funds, buying eurozone leaders more time to agree on terms for a longer programme. The German Finance Ministry reportedly sent a brief to EU officials this week detailing outstanding questions on the programme.

Greece and its international lenders reached an €85 billion bailout agreement on 11 August after nailing down the terms of new loans needed to save the country from financial ruin.

The deal, which came after 23 hours of talks that continued through the night, must still be adopted by Greece's parliament and by euro zone countries.

The currency bloc's finance ministers are expected to give their approval on Friday in time for Greece to make a crucial €3.2 billion debt repayment that falls due next week.

When creditors agreed in July to negotiate a deal aimed at keeping it afloat and in the euro zone, Greece committed to implementing major reforms, such as scrapping early retirement, by the end of October. Lenders demanded, for example, an increase in the retirement age to 67 from the nominal 62 that falls significantly depending on the number of years worked and family status.