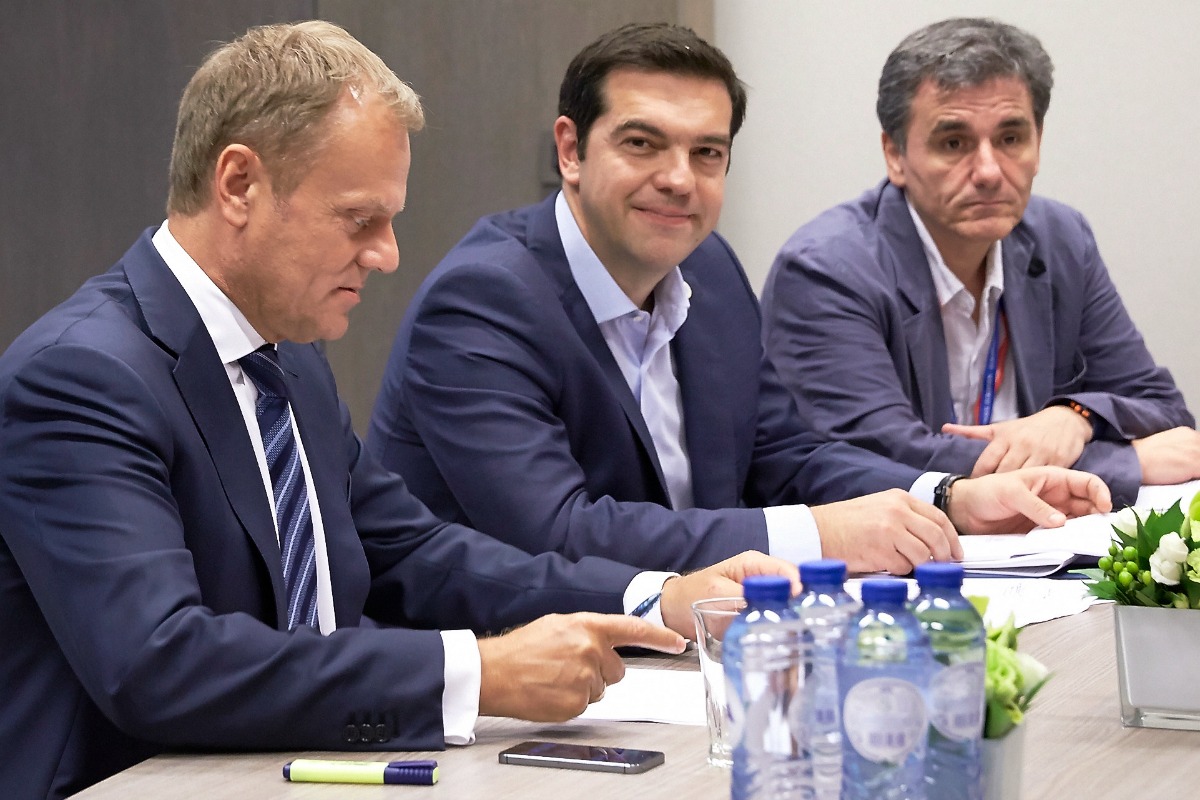 Eurozone leaders reached an agreement on a third bailout programme to save Greece from bankruptcy. But a final deal is “still weeks ahead” and will require ratification in several national parliaments, EU officials warned after all-night talks came to a close Monday morning (13 July).

“Leaders have agreed in principle to start negotiations for an ESM programme,” for Greece, announced Donald Tusk, the President of the European Council who was chairing the meeting of the 19 eurozone leaders in Brussels.

“I don’t think that the Greek people have been humiliated or that the Europeans have lost their face. This is a typical EU arrangement,” Juncker said.

“Strict conditions” will be attached to the agreement however, Tusk said, reiterating that some countries – including Germany, Finland and Greece itself – will need to put the agreement to the approval of their national parliaments. (Read the fulll eurozone summit statement).

The conditions will include “labour and product market” reforms, as well as setting up a national privatisation fund that will run Greek assets up to €50 billion, said Jeroen Dijsselbloem, the Dutch Finance Minister who chairs the eurogroup.

A meeting of the Eurogroup of finance ministers will take place this afternoon to thrash out the details of the agreement, he said.

But the Greek Parliament will be expected to “very quickly” legislate on some key aspects of the proposal, including so-called “prior actions”, Dijsselbloem stated. A Eurogroup teleconference is tentatively scheduled for Wednesday (15 July) to assess progress.

Once the national parliaments have ratified the outline of the agreement, there will be a more formal decision by the Eurogroup and the ESM governing board to start formal negotiations.

“Completion of the deal is still weeks ahead,” Dijsselbloem warned.

No deal on bridge financing

One of the keys to the agreement is the privatisation fund that will manage the Greek assets.

The fund would be established and managed in Greece, under the supervision of “the relevant European Institutions,” according to the summit text.

There was no agreement however on a proposal for so-called “bridge financing” to save Athens from an immediate liquidity crunch.

“We’ve been asked to return to the issue. That’s basically all I can say. But it’s too early to say which way it will go,” Dijsselbloem said.

The deal now requires the approval of the Greek Parliament. It is clear that Tsipras is heading for further political turmoil back in Athens.

Out of 149 lawmakers in his leftist Syriza party, 17 of its most radical members refused to support him in Saturday’s vote, which authorised the government to reopen negotiations for a bailout in exchange for submitting to austerity measures.

The revolt means Tsipras could not count on his majority in the 300-seat assembly. He got the votes he needed with the backing of the right-wing opposition, and a coalition that included socialist and other left-wing legislators.

Many EU countries believe Athens will struggle to implement the promised reforms, jeopardised by the stability of the Syriza-led government.

At the same time, even if Greece approves the agreement, other Eurozone parliaments need to give their green light.

Merkel: ‘Trust has been regained’

Germany’s Merkel said she will recommend to the Bundestag “with full conviction” the opening of the negotiations with Greece on a third bailout if the Greek Parliament approves the agreement and starts implementing it.

“The Greek government has shown readiness to carry out reforms. We now have the trust in Greece’s government which was lost over the past months,” Merkel said after the all-night summit talks.

>> Read: Merkel: Trust in the Greek government has been restored

But over the weekend, Finland’s parliament said it will not accept any new bailout deal.

Even though Finland would not be able to derail the deal, Germany could, as the ESM Treaty needs 85% of capital holders to pass the bailout.

This is how #ESM voting goes. Let’s do the math. pic.twitter.com/Q7yQIIYV9R

Critics in the European Parliament were quick to point to the weaknesses of the deal.

Syed Kamall, a British Tory MEP who leads the European Conservatives and Reformists (ECR) group, said he doubts the Greek Parliament will back the bailout deal put in front of them. "The Greek parliament must now vote on a package that was far tougher than the one rejected by the Greek people a week ago. The Greek people will be scratching their heads this morning asking why they bothered with the antics of the last few weeks."

"If you listen carefully you can hear the sound of that can being kicked a little further down the road," Kamall said, using an expression that became familiar to EU circles when the first Greek crisis broke out in 2010, triggering a succession of emergency summits that produced only temporary solutions.

"At the core of this crisis is a complete lack of honesty from many European leaders," Kamall went on. "Tsipras has been telling his people that they can end austerity whilst staying in the euro. Merkel will not tell her taxpayers that in a currency union with such disparate economies they are going to have to pay, not just bailouts, but fiscal transfers. The Eurozone and national democracy have now become disparate concepts. Perhaps that was what its founders wanted, but the price being paid is extremely high."

Guy Verhofstadt, the leader of the European Liberals and Democrats (ALDE) group, said it was important that a deal was reached in order to avoid a Grexit. “However, the way this deal was reached is not the way the European Union should work," he said. "We cannot continue to allow the eurozone to be held hostage by extremes on the left and on the right. Unanimity paralyses our Union and puts countries against each other. We have to learn from this Greek thriller. A currency union without a political union is not sustainable. Let's change Europe, so this never happens again.”

Nigel Farage, leader of the UK Independence Party (UKIP) said: "If I were a Greek politician I would vote against this deal. If I were a Greek 'No' voter I would be protesting in the streets. Mr Tsipras's position is now at stake. This conditional deal shows that national democracy and membership of the Eurozone are incompatible."