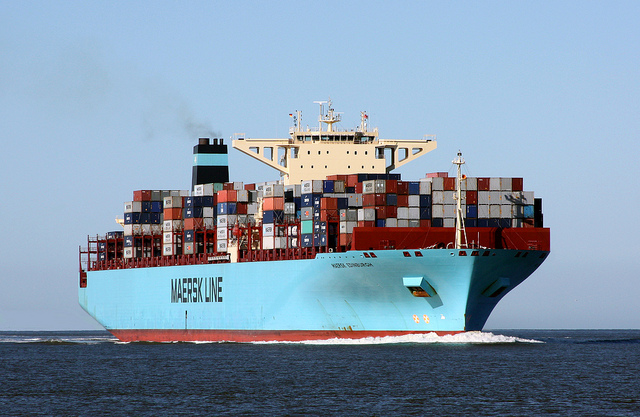 Goods for sale. The Maersk Edinburgh, near Cuxhaven. [Wolfgang/Flickr]

The eurozone’s trade surplus grew more than expected in June from June a year ago, data showed on Monday (18 August). However, the improved surplus does not yet reflect the full effect of sanctions and counter-sanctions imposed by the European Union and Russia over the conflict in Ukraine.

The international trade balance of the 18 countries sharing the euro grew to €16.8 billion in June from €15.7 billion in June last year, as exports rose more than imports. It was up from the €15.4 billion surplus recorded in May.

On a seasonally adjusted basis, however, exports dropped by 0.5% and imports rose by 0.5% in June from May.

The European Union imposed sanctions against Russia in July which took effect in August. Several European leaders objected to the sanctions, calling them a threat to the region’s fragile recovery.

Exports had helped drive the beginning of the recovery last year. But fighting between the Ukrainian government and pro-Russia separatists in eastern Ukraine began to have an effect on the eurozone’s 9.6 trillion-euro economy, whose recovery unexpectedly stalled in the second quarter, even before the sanctions.

Exports to Russia, the eurozone’s fourth- and European Union’s third-largest business partner, fell by 14% and 12% respectively from January to May.

The United Kingdom remains the eurozone’s key business partner, followed by the United States and China, data for the first five months of the year showed.

Among the bloc’s five largest economies – Germany, France, Italy, Spain and the Netherlands – exports rose year on year only in Germany and Italy in the first five months of the year. Imports were up on the year in Germany and Spain.

Eurozone employment rose for the second consecutive quarter in the first three months of the year in a sign the recovery was finally helping the labour market. A widening trade surplus signalled a further positive contribution to growth in April.