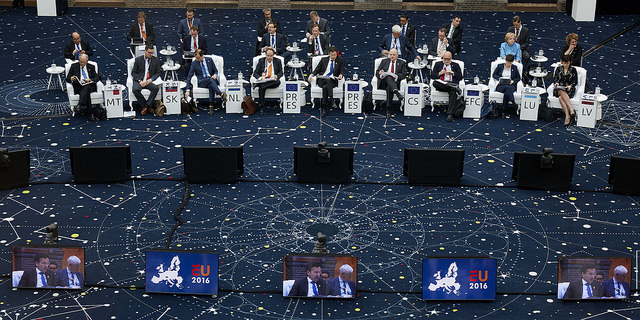 EU finance ministers met in Amsterdam, where they expressed both support and concerns about the Commission's tax proposals. [EU2016 NL/Flickr]

The release of the Panama Papers has pushed EU finance ministers into stepping up the fight against tax fraud. However, some of the bloc’s financial chiefs have concerns about the Commission’s proposal to publish the tax records of large companies. EURACTIV Germany reports.

“There is a much greater sense of urgency now,” said the chairman of the ministers’ conference, Dutch Minister of Finance Jeroen Dijsselbloem (Labour Party), im Amsterdam Saturday (23 April).

By the end of the summer, the European Commission wants to compile a list of tax havens.

French Minister for Finance Michel Sapin warned that the scandal could be fuel for the fires of European populism and that it could promote the growing feeling of a two-tier society. “If we don’t react sufficiently, populism is going to get stronger,” he said.

The ministers agreed to collaborate by May on measures that will allow the Commission to draw up a list of tax havens. They also agreed to trial a “pilot project” on the automatic exchange of information relating to holding and shell companies being used to conceal money offshore.

Commission proposals to publish the tax and financial data of large companies was given a mixed reception. The executive’s plan would apply to mulitnational companies with turnover exceeding €750 million.

Dijsselbloem was one of the ministers to back the plan, arguing that European citizens should be able to see “where large companies pay their taxes”. However, he did point out that certain member states are concerned that the affected companies would be put at a disavantage, competitively. Their worries are based on the fear that competitors could comb through a company’s financial data and glean information about its business strategy.

Hard-nosed German Minister of Finance Wolfgang Schäuble (CDU) also expressed reservations about this particular aspect of the Commission’s response to the scandal. Publishing such information and the potential subsequent “naming and shaming” could reduce a company’s willingness to share information with financial bodies, he warned. Schäuble added that it would be better if just the relevant tax authorities got the information.

Malta and Austria also voiced their concerns about the Commission’s plan, with Austrian minister Jörg Schelling urging his colleagues not to miss their targets by giving into the “hysteria of the Panama affair”.

It comes at a time when tax avoidance is high on the political agenda.