Financial services off the table at next round of TTIP talks 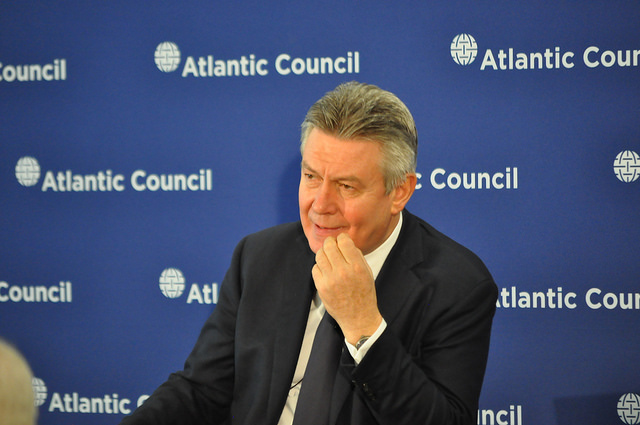 EU Trade Commissioner Karel de Gucht is pushing for regulatory cooperation with the US on financial services. 18 Feb 2014. [Atlantic Council/Flickr]

Financial services will remain off the negotiating table in the next round of talks over the Transatlantic Trade and Investment Partnership (TTIP), according to a leaked draft of the European Union’s first offer to the US on trade in services and investment.

It said, “The EU considers that the ambition of the EU offer is closely linked to the progress of discussions on regulatory cooperation. Therefore, commitments on financial services will be included at a later stage.”

“The situation may change in the future if the US shows willingness to engage solidly on regulatory cooperation.”

That seems unlikely. The inclusion, or otherwise, of financial services in the free trade agreement negotiations, is a major point of disagreement between the US and the EU. While the EU insists financial services should be included in any deal, the US Treasury has argued firmly against working with the Europeans to regulate their financial sector.

The draft said the EU reserved the right to review any takeover of a company or the establishment of a new company on a member states territory on national security grounds. That exception, which holds under existing and future legislation, will be preserved through the whole TTIP text, it said.

The draft initial offer was circulated to member states for their comments between the fifth and the sixth round of negotiations in mid-July. The document was published online today (13 June) by the European Federation of Public Service Unions. The federation is concerned that public services such as water and health are not excluded from the initial offer. This could lead to US-headquartered multinationals tendering for contracts to run those services.

The position must be rubberstamped by the Council of Ministers. The EU said in the document it reserves the right to change its position during the negotiations with the US.

EU Trade Spokesman John Clancy said, “The EU approach on services is an ambitious one, both on market access and regulatory aspects. And we will put forward strong commitments to achieve the goal of creating meaningful new market opportunities in this negotiation. We believe that the level of ambition and real economic value of our respective offers will be comparable.

“In all agreements we do not put on the table public services such as public education, public health, water distribution,” he added.

The Federation said that by not specifically listing such services as exceptions in the initial offer, there was a risk they could become part of a deal in the process of negotatiations. Their exclusion should be made explicit, it said.

Accounting and auditing services will be part of the talks. The EU’s offer is to remove all limitation on market access on those two services, with some national conditions for certain member states.

While financial services are excluded, services in health, water, tourism, maritime transport services , rail and road transport, real estate and education, among others, are included.

The text lists any national limitations on market access as well as at EU level and makes clear it expects a similar level of transparency from the US on state-level regulation in the American initial offer. The initial offers are circulated among the two sides before talks begin.

TTIP is touted by its supporters as the first 21st Century trade agreement, which will set a standard for all future agreements to follow, but it has been criticised by civil society organisations and politicians such as outgoing European Parliament President Martin Schulz for being clouded in secrecy (here). The negotiations themselves and documents such as the one leaked today are not public.

The European Commission has argued that the negotiations have been the must open and transparent international trade talks in history, pointing to regular press briefings and publication of updates.

Despite support from both US and EU industry bodies for its inclusion, the EU and US are at loggerheads over financial services in TTIP. Us Ambassador to the EU Anthony Gardner and EU Trade Commissioner Karel de Gucht clashed over the issue in Brussels at last month’s European Business Summit (here).

De Gucht said an agreement over broad principles in a free trade agreement for financial services would ensure that EU and US regulation would be finalised in a consistent manner.

“We are of the opinion that financial services should be part of TTIP, obviously the US side is very reluctant to do so,” he said.

Ambassador Garner answered, ““The Treasury has been very clear on this issue and I don’t see frankly, much chance for a change in their position.”

In the case of banks, for example, the US has said its Dodd-Frank Act is sufficient. Dodd-Frank is the US interpretation of the global Basel III standards for banks. The US argues Dodd-Frank is moving at a faster pace than its EU equivalent, the Capital Requirements Directive IV.

Basel III is set of reforms for banks to strengthen their regulation, supervision and risk management. It was endorsed by the G20 in November 2010.

If successful, the deal would cover more than 40% of global GDP and account for large shares of world trade and foreign direct investment. The EU-US trade relationship is already the biggest in the world.

Mid-July: Sixth round of TTIP talks.