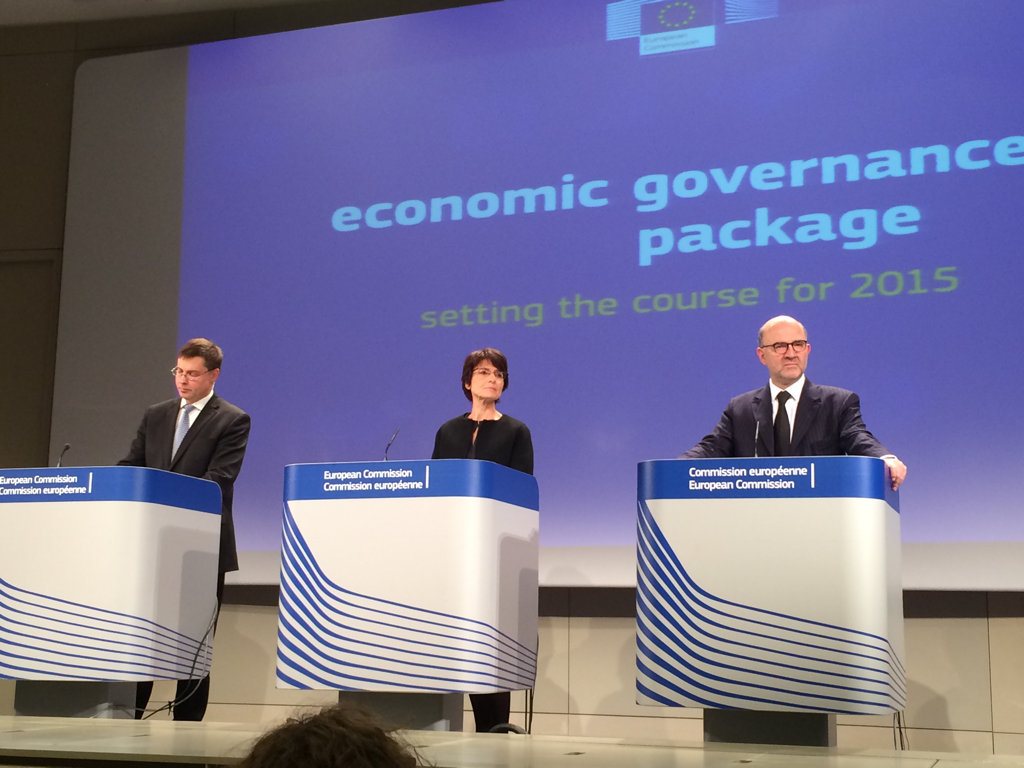 France, Italy and Belgium have sent letters to the European Commission pledging structural reforms and possible extra fiscal steps to buy time before a ruling on whether their budget policies break EU rules, Commissioners said on Friday (28 November) while presenting assessments of the draft budgets of the 18 eurozone countries.

France, which is already under an EU disciplinary procedure for running a budget deficit that is way above the EU ceiling of 3% of GDP, is facing a fine of up to €4.2 billion if by March the Commission decides that it has not taken steps agreed with EU finance ministers to consolidate its finances.

Italy and Belgium do not face fines yet, but could be put under the EU’s disciplinary procedure for failing to tackle their high and rising public debt. The Commission will review the progress of Paris, Rome and Brussels in early March.

European Commission Vice President Valdis Dombrovskis and Pierre Moscovici told a press conference that the letters from the three countries outlined their commitment to structural reforms to strengthen their competitiveness, the internal market, and the labour market.

In the case of France the letter also pledged the country would deliver the necessary fiscal effort to return to a deficit below 3% of GDP, and in the case of Italy and Belgium, to address their debt developments, Dombrovskis said.

The Commission will be able to assess the progress of all three in the spring.

“We have carefully assessed the budgetary plans of 16 euro area countries, highlighting risks where we see them. We will decide in early March whether any further steps are necessary under the Stability and Growth Pact,” said Pierre Moscovici.

“By then we will have a clearer picture of whether governments are delivering on their reform commitments. It is in the interests of the euro area that they do so. Everyone must play their part to strengthen economic recovery,” he added.

The assessments are a new power the EU executive obtained last year in the wake of the sovereign debt crisis to make sure governments did not ignore EU rules that set limits on the size of public debt and deficit.

France has angered the European Commission and its eurozone peers, because in June 2013, EU finance ministers gave Paris two extra years, until 2015, to bring its budget deficit below the EU ceiling of 3 percent of gross domestic product.

But in September, Paris said it would miss also the 2015 deadline, and would need until 2017 to comply, citing lower than expected growth and inflation.

If the Commission decides France did not take action to meet the targets set by the ministers, Paris would face a fine of up to 4.2 billion euros.

Italy and Belgium are in the spotlight because under EU rules, they should be reducing their large public debt, which, instead of falling, is expected to rise. The focus is on the pace of the deficit reduction over the business cycle, which in the Commission’s view is too slow next year.

If the view is confirmed in March, both countries could be placed in a disciplinary process which involves setting annual targets for fiscal policy, closer monitoring and the risk of fines for non-compliance.

For the other countries, none of the Draft Budgetary Plans for 2015 showed “particularly serious non-compliance” with the requirements of the Stability and Growth Pact.

For Spain, Malta, Austria and Portugal, the Commission’s opinions point to a risk of non-compliance.

The Commission asks the latter two groups of countries to take the necessary measures within the national budgetary process to ensure that the 2015 budget will be compliant with the Pact.

The Stability and Growth Pact was introduced at the same time as the single currency in order to ensure sound public finances across the EU. However, the way it was enforced before the crisis did not prevent the emergence of serious fiscal imbalances in some Member States. These imbalances were exposed during the financial crisis.

If Member States breach either the deficit criterion or the debt criterion, the Commission prepares a report to consider whether or not an Excessive Deficit Procedure (EDP) should be launched. Member States in EDP are subject to extra monitoring (usually every three or six months) and have a deadline for correcting the situation. For countries under the Excessive Deficit Procedure, financial penalties kick in and can be gradually stepped up.