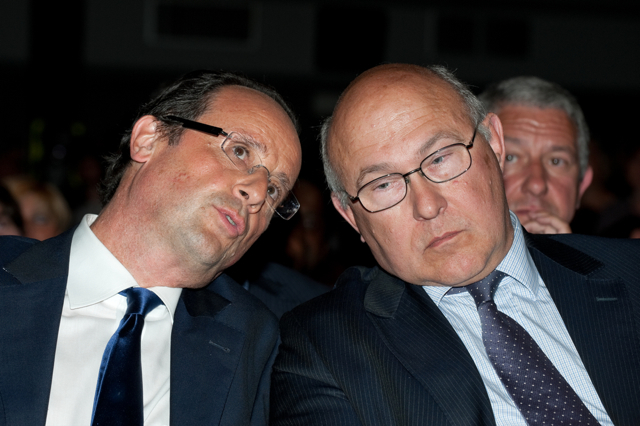 François Hollande speaking to Michel Sapin during meeting for the Socialist primary, 2011 [Shutterstock]

The French Ministry for Finance remains confident about its public deficit reductions, despite lingering doubts from the European Commission. EURACTIV France reports.

According to the French Minister for Finance, Michel Sapin, France is determined to reduce its public debt to 3% of GDP by 2015. The minister said as much in a communiqué on Monday, responding to doubts coming from Brussels after the publication of its spring 2014 forecast.

The commission believes that the public deficit will reach 3.4% by next year, above the treaty threshold and after an already extended deadline. After this, France runs the risk of financial sanctions. The French section of the forecast is headed, “Recovery slowly takes shape mainly driven by domestic demand.”

But progress has been made. Last February, the commission thought France might be capable of reducing it to 3.9% by 2015.

>> Read: Growing divergences between Paris and Brussels on deficits

“Going from 3.9% to 3.4% in two and a half months shows that something happened in France,” Sapin said during a press conference in Brussels.

French economic growth has also been called into question. France expects growth of 1.7% in 2015 but the commission expects it to be closer to 1.5%. This difference is the reason for different public deficit forecasts, because if economic growth is lower, the reduction of public deficit will be less. Without more sustained growth, France will receive less tax revenue and therefore struggle to balance its 2015 budget.

Siim Kallas, acting for Olli Rehn as European commissioner for economic affairs, and his team claimed that they did not have access to all the necessary information to conduct a thorough analysis. The economic plan to save €50 billion was taken into account but not the measures that were announced afterwards, such as the pension freeze.

French President François Hollande said that a return to economic growth was imminent in the French paper, Journal du Dimanche (4 May).

“The recovery is not complete but an economic turnaround is on the horizon, ” he said. “This phase should result in a stronger economic growth, greater competitiveness and a redistribution of purchasing power by lowering taxes.”

The French right mocked his optimism, a criticism that has since been reinforced by the Commission’s report.

The European executive published new forecasts on Monday (5 May) in which it concluded that “domestic demand is expected to become the key driver of growth over the forecast horizon. Consumer spending should progressively add to growth as real income benefits from lower inflation and the stabilising labour market.”

The commission should give a more detailed statement on the French stability programme on 2 June, when the political transition after the elections will be in full swing at the European Parliament.

“I think that in the space of a month, we will get to a point where both our forecast meet at 3%,” Sapin claimed.