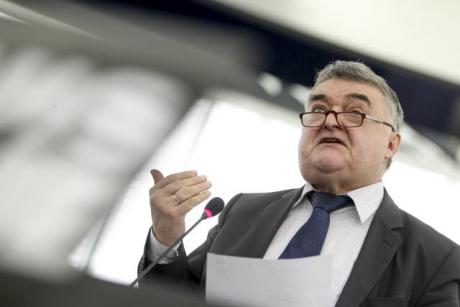 France was required to comply with EU deficit restrictions by 2015, but the European Commission is giving the country an extension until 2017, garnering sharp criticism from Germany’s centre-right in the European Parliament. EURACTIV Germany reports.

France is to receive more time to get its state deficit in order and lower it to below the accepted European threshold of 3% of annual GDP.

On Wednesday (25 February), the Commission called on the country to bolster efforts to get its budget back in order.

The EU institution is setting the French government a new deadline, giving it until 2017 to bring the deficit down to the 3% mark.

In addition, the structural deficit, which excludes economic factors, must be decreased by 0.5% this year with further spending cuts. In three months, the Commission intends to check on the government’s compliance with these rules, otherwise it could impose penalties.

Until recently, 2015 had been the deadline for France to reduce its debt to below the European threshold. But according to various figures France will miss this target. Since 2001, the country only reached a deficit less than 3% of GDP in 2006 and 2007.

Meanwhile, the chairman of Germany’s centre-right group in the European Parliament, Herbert Reul, spoke of a “bitter disappointment”.

“It is sad that the Commission relents precisely when [the situation] is getting serious. Within the framework of the European semester, the Commission took on new instruments and more responsibility for budget discipline,” said Reul, who hails from the German Christian Democratic Union (CDU).

The fact that the EU’s Commissioner for Economic and Financial Affairs, Pierre Moscovici is putting off sanctions again, wears away at the binding nature of these rules in an irresponsible way, Reul added.

The chairman of the Bavarian Christian Social Union (CSU) group in the European Parliament, Angelika Niebler, also expressed her disappointment regarding the Commission’s decision. The Commission does not fulfill its role as the protector of the Stability and Growth Pact, Niebler said.

“Within the framework of EU legislation on the European Semester, the role of the European Commission was strengthened. It was not easy to receive the necessary majorities for this in the European Parliament. The member states were also shaken off on many issues. The fact that now the Commission is using its decision-making competence on the first real touchstone to act in favour of the deficit offenders and all without sanctions, is a provocation,” Niebler explained.

Meanwhile Reul said he considers it “confusing that a rebellious government in Greece is trapped in a debt dispute, while a soft hand is demonstratively used on larger countries.”

Whoever continues to provide new deadlines, leads to a decrease in the pressure for consolidation because nobody has to fear sanctions if they break the rules, the centre-right MEP argued.

“It is incomprehensible that, while the debt crisis in Greece is still far from being safely overcome, a large euro country is still allowed to generate debt unabatedly,” Reul continued.

“The worst fears have come true,” said CSU financial expert and Vice-Chair of the Committee on Economic and Monetary Affairs in the European Parliament, Markus Ferber, sharply criticising Moscovici.

“The Commissioner responsible clearly lacks the political will to implement the existing rules against his own country,” Ferber said.

France will not honor the new deadline either, Ferber argued. “The country had enough time and did not deliver, instead banking on precisely this postponement,” he commented.

The CSU MEP predicted, “as long as France does not have any serious consequences to fear, this game will continue”.

Marcel Fratzscher, President of the German Institute for Economic Research (DIW), called the postponement for France a “fatal signal” via Twitter and asked how Europe hopes to get Greece to credibly save in this way.

At the start of this week, German EU Commissioner Günther Oettinger warned, “the integrity of the Stability Pact is on the line”, speaking to Handelsblatt. In his view, the austerity and reform efforts made by the French government are not enough, he continued.

“France is not yet where it should be,” Oettinger said. “Compliance with the Maastricht rules does not always meet expectations. That is concerning,” he commented.

But there was also criticism in Germany over the European Commission decision. The local delay in investment is a barrier to growth and contributes to the high current account surplus. “There is no doubt that Germany is an important motor for Europe’s economy. And the Germans are rightfully proud of their export success, which all of Europe benefits from,” Commissioner Moscovici indicated.

“In no way does the European Commission want to undermine this success. But we can also not close our eyes before increased risks related to a lack of private and public investments and, technically speaking, the underlying imbalances in savings and investments. That is a barrier to growth and holds medium-term risks,” the Commissioner explained.

At a constant current account balance of 8%, no trend reversal can be detected in this imbalance at the moment and the political response to this has so far been inadequate.

The Commission’s recommendations will be discussed at the next meeting of EU finance ministers in March.

At that time, the Commission will also bilaterally discuss the individual national reports in with representatives from the member states. By mid-April, the member states will be able to submit their national plans for reform within the framework of the European Semester.

Based on this data, the Commission will submit its country-specific recommendations in May.