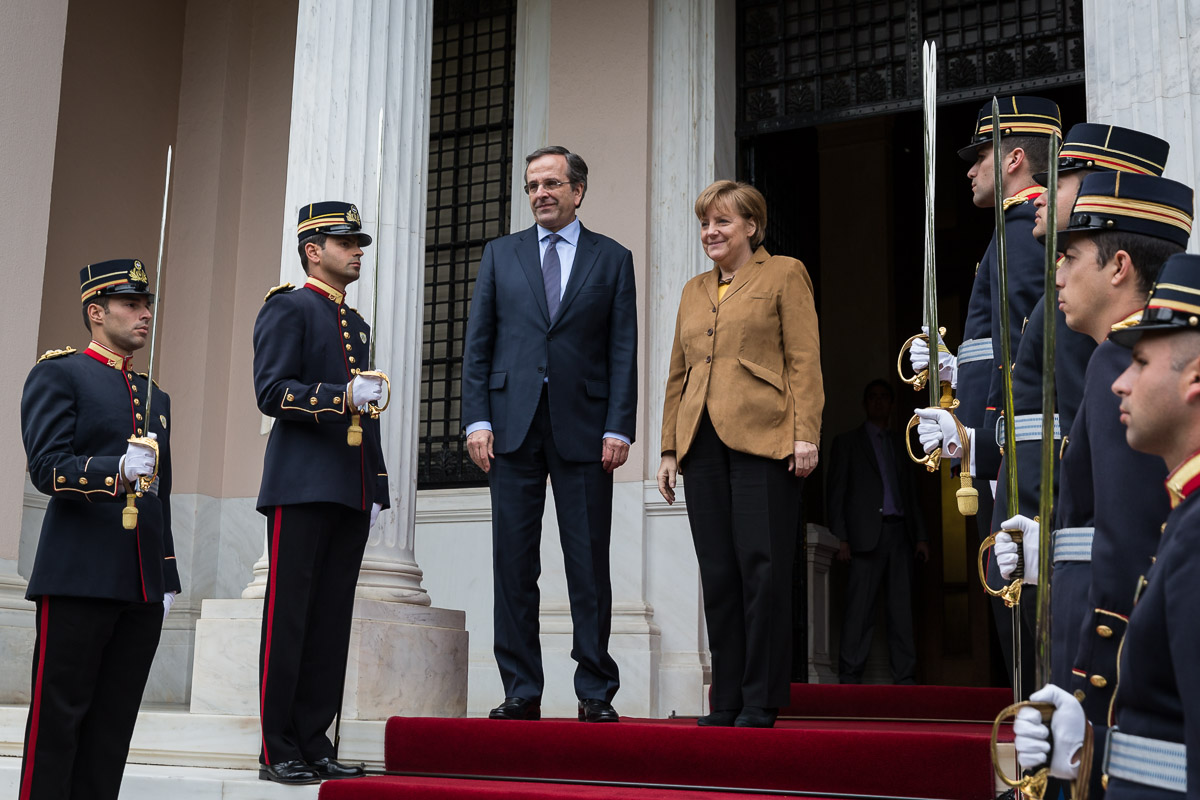 For the first time in four years, Greece has acquired fresh money from the bond market. But amid explosive demand, and euphoria among investors, a study released by a research centre in Freiburg warns of premature optimism. EURACTIV Germany reports.

“The real economic and fiscal conditions in Greece do not justify the fact that the Greek state […] was able to place a government bond at an interest rate under 5%,” says a recent study released by the Centre for European Policy (CEP) in Freiburg, Germany.

Last Thursday (10 April), the Greek government returned to the bond market, offering five-year bonds with a 4.95% rate of a yield, attracting more than €20 billion in commitments, breaking a four-year period of “exile” from financial markets.

But the situation in the country remains “desolate”, the CEP study says, indicating that the decline of Greece’s borrowing capacity continued unhindered in 2013.

In a symbolic visit to Athens on Friday (11 April), German Chancellor Angela Merkel praised the new developments in Greece as a “starting signal”. Her optimism was mirrored by chief of the EU taskforce on Greece, Horst Reichenbach, who called the country’s return to the bond market a “potential turning point”.

“The markets are seeing that there is political support and approval for reforms in Greece,” Reichenbach said in a statement for Spiegel Online. “This outcome would not have been possible if the government had not come to an agreement with the Troika,” he continued.

Still, the CEP study shows no indication that Greece will become creditworthy in the foreseeable future. Investments have been decreasing since 2011, and only made up 10.7% of the country’s GDP in 2013, the authors write.

The country’s rate of consumption is another obstacle, the experts indicate, preventing a timely rebound. Greek consumption has been over 100% of disposable income since 2002; in 2013 the percentage climbed to a record high of 119%.

A recovery of borrowing capacity is only possible, the authors of the study say, if the consumption rate is drastically reduced. But according to the experts, this is not even worth discussing at the moment.

“The facts show that very difficult reform efforts have paid off, and we are seeing progress”, Merkel said in a joint press conference with Greek Prime Minister Samaras on Friday. The chancellor specifically praised the country’s “primary surplus” in the national budget, which she said has led to returning growth, and budding signs of improvement.

But the CEP’s assessment of the country’s return to the bond market is not so optimistic. In its recent study, the experts say the news does not necessarily mean Greece has successfully implemented tough reforms.

Instead, they write, the Troika’s financial and monetary policy interventions have “overpowered market economic forces” in Greece since the crisis. These should be given credit for the latest improvements in the country’s recovery.

High demand for fresh five-year loans is an expression of investor confidence that eurozone politicians will prevent Greek insolvency at all costs, the study says.

Optimism may lead to decline

The CEP study also warns that it is still too soon to consider Greece’s case a success story. The latest signs of market optimism are by no means a sign that Greece has turned the corner, the authors write.

In their view, the opposite is true: “This investor behaviour will lead to a decrease in reform pressure, and willingness toward reforms in Greece, pushing the country’s recovery further off in the distance”, the CEP experts say.

“Greece continues to sink into poverty,” the study says, “the country is distancing itself from the possibility of rehabilitation through economic growth, and therefore also from moving past the crisis”.

Unlike its bailed-out eurozone peers Ireland and Portugal, Greece defaulted on its debt as recently as 2012 and currently holds a credit rating well below its fellow eurozone members.

But the country's recent return to the bond market attracted investors because of a relatively high return rate during an era of particularly low interest rates. Expectations that the European Central Bank will not relent in taking steps to bolster the eurozone economy also add to the attractiveness of bonds issued by the bloc's riskier countries.

Greece has defaulted a number of times in its modern history and the current total debt level is around 175% of annual economic output - a level considered by economists to be unaffordable in the long run. Investors, however, appear willing to overlook the fact that private bond holders suffered heavy losses when €130 billion of Greek debt was restructured two years ago. The rush to pick up bonds after Thursday's (10 April) return to the market.