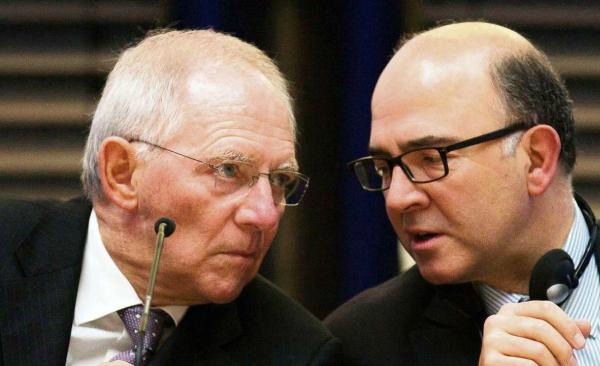 Ambitious proposals for a pan-European financial transaction tax look almost certain to be scaled back after Germany's finance minister acknowledged that the levy could be phased in slowly, starting with share trades.

The tax failed to gain widespread support when it was proposed during the eurozone debt crisis but eventually won the backing of an uneasy coalition of 11 states, led by Germany and France.

Long-expected revisions, however, would mark a victory for banks and trading organisations that have lobbied furiously against the scheme and would reflect practical problems and political divisions over the tax.

While many critics have highlighted how difficult it would be to collect the tax, Paris and Berlin remain at loggerheads over the shape of the levy and whether it should apply to derivatives, which France opposes.

Last year, as political support began to wane, officials in Brussels started to look at how the proposals could be softened, considering a tiny charge on share deals only and a long build-up to full implementation of the scheme.

German Finance Minister Wolfgang Schäuble appeared to back this approach on Tuesday, saying that a phased introduction would be better than abandoning it, suggesting that it could apply to shares first and derivatives later.

"We know that step-by-step is not the best approach, but it's better than nothing," Schäuble said, adding that a consensus was emerging in favour of starting with a tax on share trading.

He declined to give a time frame but said that he hoped Berlin and Paris would agree how the tax should look when the cabinets of both governments, including German Chancellor Angela Merkel and French President François Hollande, meet in Paris on Wednesday.

France and Germany are committed to a agreeing a deal on the tax before the European Parliament elections in late May, a French official said ahead of Wednesday's meeting.

Austrian Finance Minister Michael Spindelegger, whose country is among those supporting the tax, said he did not expect the levy before 2016.

The resurrection of an idea first conceived by US economist James Tobin more than 40 years ago was symbolically important in showing that politicians were tackling the banks and organisations blamed for causing the financial crisis.

A redesigned levy is expected to raise only a tenth of the amount originally targeted, officials who worked on revised proposals told Reuters last year.

Officials in Brussels had expected the tax to raise up to €35 billion a year. But under the model considered last year, the standard rate charged on bond and share trades could drop to 0.01% of the value of a deal, from 0.1% in the original blueprint.

Eleven eurozone countries agreed in October 2012 to press ahead with a disputed tax on financial transactions aimed at making traders share the cost of fixing a crisis that has rocked the single currency area.

Other EU countries are free to join at any time under the Lisbon Treaty's so-called ‘enhanced cooperation’ procedure.

The initiative was pushed hard by Germany and France but was strongly opposed by Britain, Sweden and other proponents of free markets.

EU finance ministers gave the green light for the 11 countries to move forward in January 2013, opening a tricky debate on how the money should be used.

Under the initial proposal tabled by the European Commission in 2011, the FTT would apply to any transaction in financial instruments, excluding primary market issuance, and bank loans. Share and bond transactions would be taxed at 0.1% of the higher of consideration and market value and derivatives at 0.01% of their notional amount. The FTT would be due if at least one party to a transaction is based in the EU.

Germany and France, the main proponents of tax convergence, first pushed for EU-wide implementation starting in 2014, but then agreed to resort to the enhanced cooperation mechanism. In this case, France wants to introduce the FTT this year.