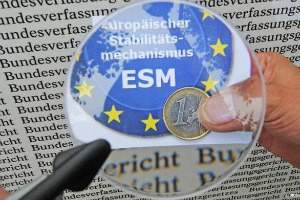 Germany challenged a central plank of plans to forge a banking union in the eurozone yesterday (14 November), arguing against the use of the currency bloc's funds to help lenders exposed as dangerously weak by health checks next year.

As finance ministers gathered in Brussels to outline plans to deal with banks still in difficulty, Germany's finance minister hardened his stance on the use of the bloc's emergency fund, according to people close to the talks.

Ministers had been drafting a joint statement to outline their plan of action after bank health tests next year to draw a line under the region's financial crisis.

But sharp divisions emerged between France, which wants a euro zone safety net, and Germany, which is worried that it will shoulder much of the burden if weak countries turn to the bloc's emergency fund.

Many consider a euro zone backstop central to building a banking union to avoid a repeat of events in Ireland, which required a sovereign bailout when it buckled under the weight of its banks' debts.

Earlier this year, euro zone countries agreed that their rescue fund, the European Stability Mechanism, could provide direct assistance to banks, not just indirectly by lending to governments.

This is a key demand of some of Europe's biggest countries – France, Italy and Spain. On Thursday, Germany called that into question.

Ahead of the meeting, French Finance Minister Pierre Moscovici told reporters: "France continues to believe that we … must not exclude direct recapitalisation by the European Stability Mechanism as a last resort."

"The German legal position rules it out now," said Schäuble. "That's well known. I don't know if everyone has registered that."

Inside the meeting room, people close to the talks said the two clashed again, when Germany asked for the removal of any reference to ESM bank aid from the ministers' statement. He was challenged by Moscovici, who was backed by Spain's Economy Minister Luis de Guindos.

The statement is due to be made on Friday.

The dispute comes at a delicate moment in Europe's early economic recovery and could yet stymie the banking union reforms.

Ireland and Spain, which both required international emergency aid to tackle their banking problems, will end those programmes in the coming weeks.

But bank health checks next year – by the European Central Bank and then by regulators across the wider European Union – could upset this fragile picture as they are likely to reveal losses on loans and capital holes at banks.

By explaining how the clean-up will be paid for, ministers had hoped to reassure investors that they are finally ready to come clean on the bank problems that have dogged them for more than half a decade.

But their promise to stand ready with national backstops will be a hollow one if it is unclear how countries who are too weak to prop up their banks alone can be helped.

A new pan-euro zone fund to pay for the costs of closing down or salvaging weak banks was intended to address this but Germany also made clear on Thursday that it did not want the ESM to lend to any such fund.

"We are very clear that we don't want a mutualisation of bank risks," one German government official said, adding that talks between political parties in Berlin to form the next government meant that Schäuble had yet to receive a final mandate for negotiations.

Banking union, Europe's most ambitious reform since the start of the euro currency, would see the ECB policing lenders and should ultimately form a united front across the euro zone to back ailing banks or close them down.

But the path to completing it is strewn with obstacles, and time is running out for the ministers to strike agreement by their self-imposed deadline of the end of the year. One of the most sensitive questions is how to deal with banks so badly wounded that they need to be closed.

"We won't put a knife to our throats," said Moscovici. "It's unlikely we will reach agreement tomorrow."

The first pillar of banking union will see the ECB take on the supervision of big banks towards the end of next year.

In tandem, it will conduct a review of their balance sheets. Rating agency Standard & Poor's believes that the bank capital shortfall in the euro zone may total slightly more than 1 per cent of the region's economic output, or about 95 billion euros.

Before such a test result can be announced, the question of who pays for the costs of salvaging weak banks or shutting those not worth saving must be answered.

Any state help will come at a heavy cost by imposing losses on shareholders and junior bondholders. In time, possibly as soon as 2015, senior bondholders and even depositors with more than 100,000 euros will be forced to take losses.