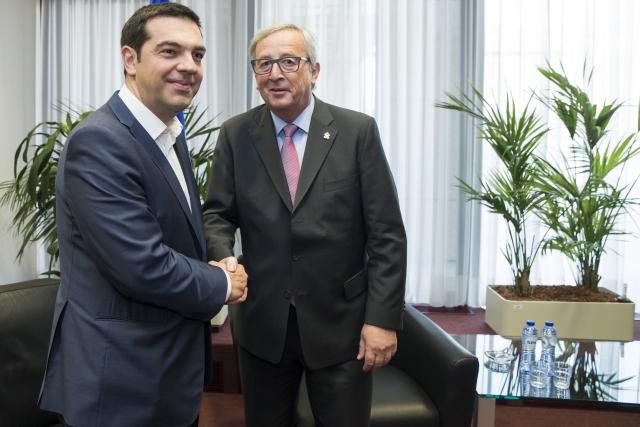 Greece hopes to clinch a deal with its lenders at a meeting of eurozone finance ministers on 18 June, as time runs short for the country to stave off default at the end of the month.

“I hope it (a deal) will come very soon, on June 18, when the Eurogroup takes place,” State minister Alekos Flabourari, a close aid to Greek Prime Minister Alexis Tsipras, told Greek state television ERT on Friday (12 June), a day after the International Monetary Fund walked away from negotiations in Brussels, citing major differences.

The IMF dramatically raised the stakes in Greece’s stalled debt talks on Thursday (11 June), announcing that its delegation had left negotiations in Brussels and flown home because of major differences with Athens.

Greece has no more time for “gambling” and needs to decide on a cash-for-reforms deal, European Council President Donald Tusk said on Thursday (11 June) during a press conference.

Tusk, who met Greek Prime Minister Alexis Tsipras in Brussels on Wednesday, told a news conference: “It is very obvious that we need decisions, not negotiations.”

“There is no more time for gambling. The day is coming, I’m afraid, that someone says that the game is over.”

Greece needs a deal to unlock aid before the end of the month when it is otherwise set to default on a €1.6 billion euro repayment to the IMF. That could trigger capital controls and possibly push Greece out of the eurozone, with unpredictable consequences for the European economy.

Major sticking points remain. Athens has balked at measures such as curbing pension benefits and raising the value added tax, and has pressed its lenders for more help to attempt to reduce its debt burden.

“Whatever we do, whatever measure we take, no matter what we do, if we don’t start addressing the debt issue, there is no chance that the Greece economy kickstarts,” said Flabouraris. “And if the Greek economy doesn’t kickstart, we cannot deal with unemployment, shops will close down.”

According to IMF Spokesman Gerry Rice there are major differences between the IMF and Greece in most key areas. “There has been no progress in narrowing these differences recently and thus we are well away from an agreement,” he said.

Rice said the sticking points remained pensions, taxes and financing. The IMF technical team had returned to the United States but remained “fully engaged” with Athens.

Athens stood by its assertions of recent days that all is not lost. “The Greek delegation, as agreed, is ready to intensify deliberations in order to conclude a deal soon, even in the coming days,” spokesman Gabriel Sakellaridis said.

Tsipras held two hours of talks with European Commission President Jean-Claude Juncker, but neither side reported any breakthrough. “Come in the torture room,” Juncker told Tsipras at the start of their meeting.

EU officials later described the talks as a “last attempt” to reach a debt deal.

Tusk’s admonition reinforced warnings by German Bundesbank President Jens Weidmann and EU Economics Commissioner Pierre Moscovici that time was running out to avert a Greek state bankruptcy and possible exit from the eurozone.

Late night talks between Tsipras and the leaders of Germany and France produced no breakthrough, although all sides said they had moved closer on the procedure leading to an agreement.

“At the end of the talks there was absolute unanimity that Greece will work intensively and full steam ahead … in the coming days to solve all remaining issues,” German Chancellor Angela Merkel said.

People familiar with the talks said the two sides have come closer to agreeing a primary surplus target but are still wide apart on how to achieve it, with EU and IMF experts doubting that measures touted by Greece can do the job.

Late on Thursday, Bild reported that the German government is holding “concrete consultations” on what to do in the case of a bankruptcy of the Greek state, citing several people familiar with the matter.

This includes discussions about introducing capital controls in Greece if the crisis-stricken country goes bankrupt, Bild said in an advance copy of an article due to be published on Friday. A spokesman for the German government could not immediately comment on the report.