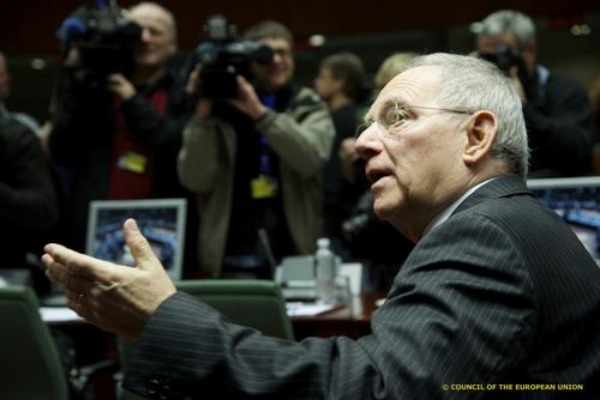 Greece must underscore its political commitment to economic reforms if it is to receive a second EU bailout, finance ministers meeting in Brussels warned yesterday (24 January). Meanwhile, Greece's creditor banks argue they cannot fulfil their part of the deal unless the EU first commits the money.

“All Greek [political] parties must agree to the [austerity] measures and a new programme, independently of the upcoming elections,” German Finance Minister Wolfgang Schäuble told journalists after a meeting of EU finance ministers in Brussels.

Opinion polls suggest Samaras would win an election, but he would need to form a coalition with other parties to gain a mandate for governing.

“Greece has fallen short of its reform and austerity targets by a wide margin,” Austrian Finance Minister Maria Fekter said after the Brussels meeting. She said that the Greeks had been “sent home with a list of things they need to fulfil”, adding that the country would not receive its second bailout otherwise.

The new requirement to obtain undertakings from all potential political players adds a further obstacle for Greece to surmount before Germany and other European donors hand out any further bailout cash.

Athens needs the €130-billion rescue plan drawn up by European partners and the International Monetary Fund to be firmly in place before bonds worth €14.5 billion fall due in March.

Germany has closely linked the bailout deal, agreed in October 2011, to a commitment by banks to voluntarily accept a nominal 50% cut in the value of their Greek bond holdings.

But the banks claim their part of the deal cannot be completed unless they are convinced that Athens has the confidence of its eurozone partners, placing Greece in an uncomfortable chicken-and-egg situation.

Andrew Lilico, the director of the Europe Economics consultancy, told EURACTIV that funds would have to be released by governments under the second Greek bailout before the banks can agree on a debt write-off.

Lilico cast doubt on the commitment of certain eurozone members to the rescue deal, saying: “If the Germans and French want the second Greek bailout to proceed, they will have to replace the share of the Austrians, Slovakians and Finns and maybe also the Dutch,” whom he believes are unwilling to commit.

Both Lilico and Sony Kapoor, the managing director of economic think tank Re-Define, told EURACTIV that markets have largely discounted for the effects of a Greek default now, limiting the impact it would have.

They both said that the direct impact of a default could be borne by European creditor banks.

The latest attempt to seal agreement on the banking sector's contribution to the second Greek bailout failed Monday (23 January) when eurozone finance ministers rejected the terms of an offer to private bondholders, claiming that the deal would not sufficiently stave off Greece's deficit.

Under the Greek rescue plan, private creditors are being asked to voluntary accept a nominal 50% cut in the value of their Greek bond holdings in return for a mix of cash and new bonds, although there are suggestions that may not now be enough.

Private-sector involvement is a key part of a new €130-billion bailout package that needs to be in place by March to ensure Greece does not default on its massive debt.

But talks are not progressing as fast as hoped. The issue is pressing, since a new bailout for Greece from the International Monetary Fund and the EU is hanging in the balance pending the success of private sector involvement. More generally the failure to agree on the private sector's role comes at a critical moment in the euro crisis, adding to market jitters.