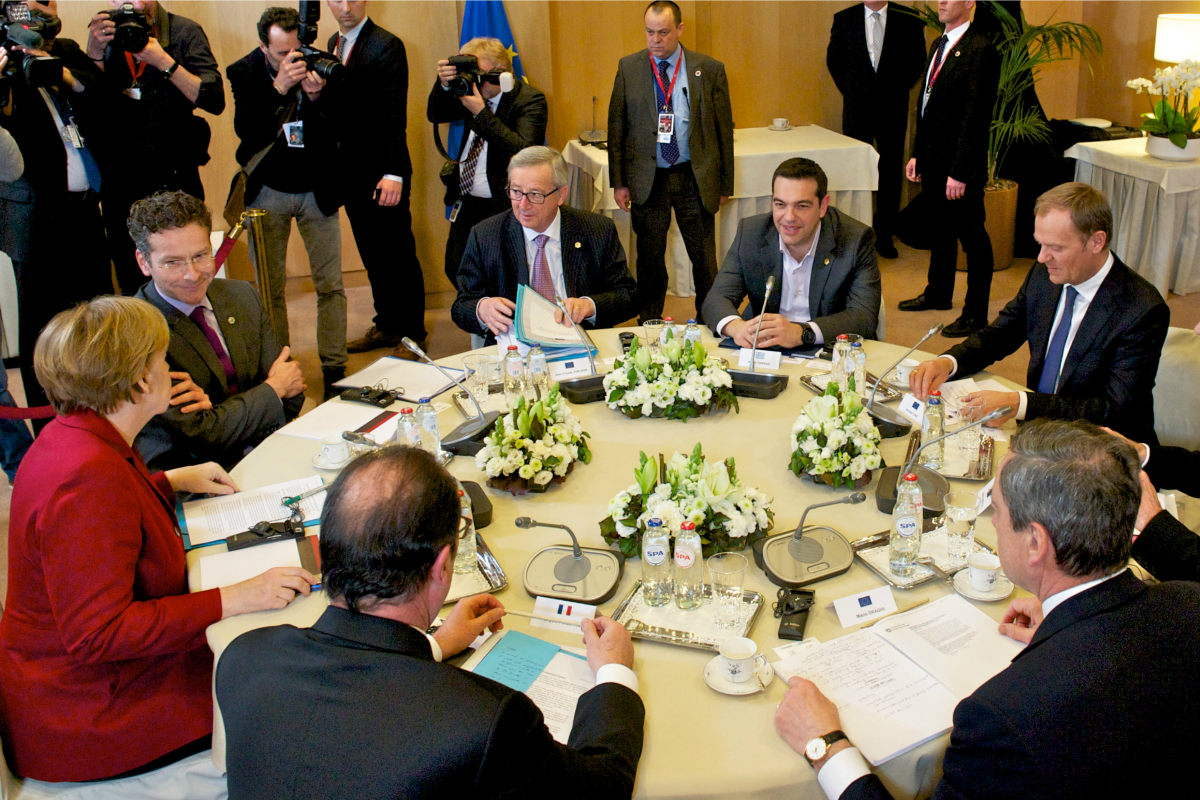 Informal meeting on Greece in the margin of the European Council, 19 March 2015 [© European Union]

At the request of Tsipras, the European Council President, Donald Tusk, managed to arrange a three-hour long informal meeting to discuss Greece, whose economy is crumbling under the weight of accumulated debt.

The meeting resulted in Greece agreeing to send a new list of reforms that will be implemented over the coming months, in exchange for receiving the next tranche of EU bailout money.

Tsipras requested the meeting, as the discussions with its international creditors (the European Central Bank, the International Monetary Fund and the European Commission), were getting “too political and critical”.

A Council source said Tsipras wanted a fresh start with some of the other EU leaders, and assurance that they would talk down any prospect of a Greek exit from the eurozone at their press briefings. Last week, German Finance Minister Wolfgang Schäuble warned that Greece could accidentally stumble out of the eurozone, because its leaders had failed to pass the reforms agreed in exchange of EU bailout money.

Following the discussions, Tusk and Juncker tabled a short, joint statement which read:

“We fully adhere to the agreement of the Eurogroup of 20 February 2015. In the spirit of mutual trust, we are all committed to speed up the work and conclude it as fast as possible. Within the framework of the Eurogroup agreement of 20 February 2015, the Greek authorities will have the ownership of the reforms and will present a full list of specific reforms in the next days. We reconfirmed the practical agreement on the process: The policy talks take place in Brussels. The fact-finding missions take place in Athens. The Eurogroup stands ready to reconvene as soon as possible.”

Merkel said at news conference that, “the Greek government is committed to propose reforms so that the process of an evaluation can start. A list will be sent and everything is supposed to be completed quickly. We didn’t talk about specific details. The Greek prime minister has declared his willingness to send these reforms. Trust was obviously needed”.

Asked by reporters why the meeting lasted so long without any visible new outcome, Merkel said that maybe the press had heard about potential Greek reforms, but that these did not happen. The Chancellor added that the discussions had been “calm” on matters of substance, and that verbal attacks between Athens and Berlin were not addressed.

An EU official told EURACTIV that EU leaders agreed that the rhetoric over the past couple of weeks had not been helpful. “There was not a confrontational mood, but frank words,” he said.

Greece has been incensed by unflattering photos of their leaders in German tabloids, including the CDU-friendly BILD, and a reportedly fake video, featuring Minister of Finance Yanis Varoufakis, flashing his index finger towards Germany.

Unlike Merkel, Tsipras left the Council without holding a press conference, but told reporters while leaving that he was more optimistic that all sides will be able to complete a deal.

Belgium PM angry to be excluded

Earlier in the afternoon, when EU leaders arrived at the Council doorstep, a visibly angry Belgian premier Charles Michel expressed his anger that he was going to be excluded from the meeting on Greece.

Michel told the press he had not given a mandate to France and Germany to negotiate with Greece. “The Belgium stake is €7 billion,” he recalled.

His statements led Tusk to hold a short meeting with the heads of the Benelux countries, asking them if they wanted a formal eurozone summit. When they all refused, the informal meeting with Tsipras went ahead.

Austrian Prime Minister Werner Faymann requested that Parliament President Martin Schulz attend the meeting, something which Tsipras would be open to. But Schulz declined the invitation.

“Tusk’s life is not easy and I didn’t want to make it more difficult. This is a sign of friendship,” Schulz said at a press conference.

“Any meeting is useful and the meeting this evening is a step in the right direction. I’m not going to take part, but there were member states who wanted the Parliament to be present. I took note of the invitation from Tusk, Merkel and Hollande,” Schulz said.

The Parliament chief urged EU leaders to further consider using the €315 billion investment plan proposed by Juncker plan to get Greece’s economy back on track.

“It contains all sorts of options for Greece,” Schulz said, mentioning investment in renewable energy in one of Europe’s sunniest country, making use of the Youth Guarantee to create the best-skilled generation in Greece and investing in transport and hotel to increase tourism.

“No one will invest in a country that is spoken so negatively about,” Schulz stated.