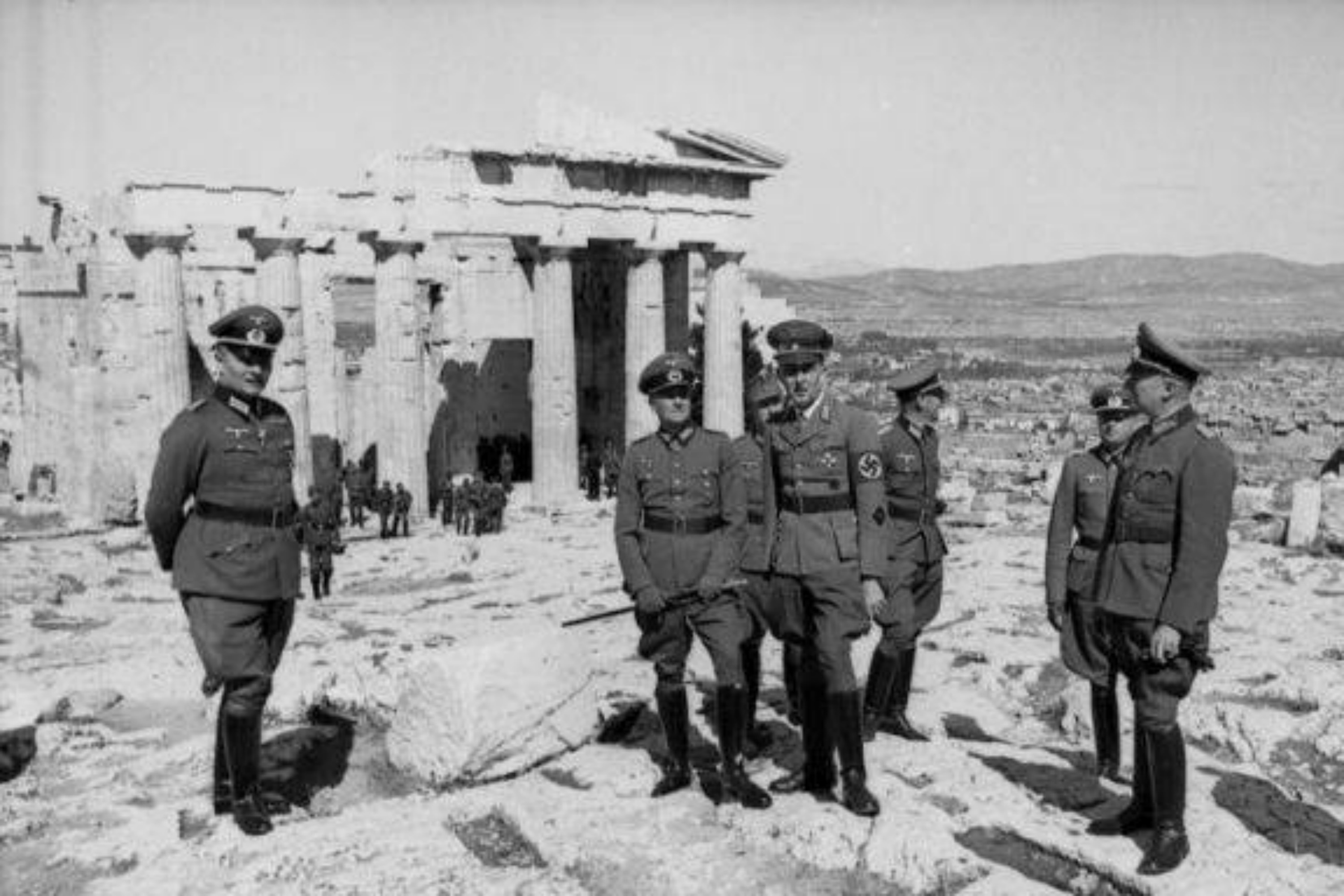 Nazi officers at the Acropolis. [ENetEnglish]

Greek governments and also private citizens have pushed for war damages from Germany for decades, but the Greek government has never officially quantified its reparation claims.

A parliamentary panel set up by Prime Minister Alexis Tsipras’s government started work last week, seeking to claim German debts, including war reparations, as well as the repayment of a so-called occupation loan that Nazi Germany forced the Bank of Greece to make and the return of stolen archaeological treasures.

The campaign for compensation has gained momentum in the past few years as Greeks have suffered hardship under austerity measures imposed by the European Union and International Monetary Fund in exchange for bailouts totalling €240 billion to save Greece from bankruptcy.

Tsipras has frequently blamed Germany for the hardship stemming from the imposition of austerity. He has angered Berlin by threatening to push for reparations in the middle of talks to unlock aid for Greece.

Germany has repeatedly rejected Greece’s claims and says it has honoured its obligations, including a 115 million deutschmark payment to Greece in 1960.

In the meantime, Greek Finance Minister Yanis Varoufakis told Greek daily Naftemporiki on Monday that he wants the negotiations with the country’s official lenders to reach a preliminary deal at a 24 April meeting of euro zone finance ministers.

“At the Eurogroup [meeting] of 24 April there must be a preliminary conclusion (of the talks), as per the Eurogroup accord on 20 February,” Varoufakis told the paper.

Greece offered a new package of reforms last week in the hope of unlocking remaining bailout funds, but has yet to win agreement on the proposals with its EU and IMF lenders.

“We are not going to condemn the country, as previous governments did, to a long-term asphyxiation,” Varoufakis told the paper, suggesting the EU/IMF lenders had treated the previous conservative-led government more leniently.

“The negotiations will end when we reach an honourable agreement, which will give the Greek economy the prospect of real stabilisation and substantive growth,” Varoufakis said.

Asked whether he had thought of quitting the job, said: “Not for one minute.”

On Sunday Varoufakis said that Greece “intends to meet all obligations to all its creditors, ad infinitum”.

>> Read: Greece pledges to meet all obligations to lenders

Germany's rejection of an initial Greek request for a six-month loan extension forced Athens into a string of politically sensitive concessions, postponing or backing away from campaign promises to reverse austerity, scrap the bailout and end cooperation with the "troika" of EU, ECB and IMF inspectors, which are now called "the institutions".

One response to “Greece puts a figure on Nazi reparations claims”