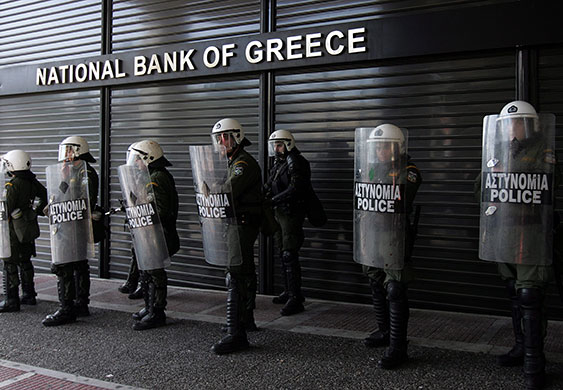 Greece risks running out of cash by April 20 unless it secures fresh aid, a source familiar with the matter told Reuters yesterday (24 April), leaving it little time to convince sceptical creditors it is committed to economic reform.

After talks with EU leaders including German Chancellor Angela Merkel this week, Athens said it will present a package of reforms to its eurozone partners by Monday in the hope of unlocking aid and avoiding a messy default.

“It will be done at the latest by Monday,” government spokesman Gabriel Sakellaridis told Mega TV.

Merkel did not reveal details from her meetings with Greek Prime Minister Alexis Tsipras, but she did tell members of her center-right party at a closed-door meeting in parliament on Tuesday that Greece needs to work with the European Central Bank, the International Monetary Fund and the European Commission to unlock the cash injection it needs.

“Time is short,” she said, according to party allies.

Comments from German Minister for Foreign Affairs Frank-Walter Steinmeier, and Eurogroup chief Jeroen Dijsselbloem, suggested slightly more optimism among Greece’s partners that it may be moving closer to meeting the conditions needed to receive more cash.

“That process is moving once again, I say with some cautious satisfaction. Now there’s hard work happening on complementary additions to the (reform) list,” said Dijsselbloem.

“That they’re all but broke, we knew already,” he told RTL Nieuws television. “But my message to the Greeks is then every time again: So then, work with us as quickly as possible on an adjustment to the programme.”

Athens is hoping the finance ministers will approve its list and allow the return of about €1.9 billion in profits made by the European Central Bank on Greek bonds, the source familiar with the matter said.

The source said Athens also expected the return of about €1.2 billion in cash left in the Greek bank bailout fund that was taken back by the eurozone last month – something eurozone officials said the eurozone bailout fund would discuss on Wednesday.

Greece argues that its own bank rescue fund should have returned only €9.7 billion to the eurozone rather than €10.9 billion, since it had used its own cash reserve rather than EFSF bonds to make that recapitalisation.

Greek officials have not gone into detail about the latest reform list. Sakellaridis said only that it would not contain recessionary measures but structural changes.

The reforms are deeply sensitive for Tsipras, who came to power in January pledging to end austerity policies but was forced to accept an extension to a hated bailout programme under the threat of a banking collapse.

Greece has received two bailouts totalling €240 billion since 2010 but its economy has shrunk by 25% partly due to austerity measures imposed by the lenders. One in four Greeks is out of work, and more than half of all young people.

Tsipras discussed the reforms with Merkel in Berlin on Monday. Sakellaridis said that in a four-hour working dinner they discussed only the outline without going into depth.

Both leaders voiced mutual goodwill during a visit that appeared to have cleared the air after weeks of public acrimony between Athens and Berlin.

Steinmeier said after meeting Tsipras yesterday that an improved climate between the two countries would help start serious negotiations for a solution to Greece’s debt problems.

The German politician told reporters this alone would not solve Greece’s financial problems, but it was “no doubt a precondition to begin serious talks in the coming days”.

A spokesman for the European Financial Stability Facility bailout fund said that Dijsselbloem had asked the agency to review the Greek case for the cash refund, and had also asked the Eurogroup Working Group to work on the issue.

The move appeared to be a gesture of encouragement to Tsipras after eurozone ministers previously said Athens would get no more money until its reforms were approved by the Eurogroup and implemented to the satisfaction of the creditors.

The source familiar with the government’s cash position said Athens had lately relied on repo transactions – where it borrows money from state entities – to cover its cash crunch, but could continue to rely on that only for a few more weeks.

“Although it will be hard, the country can make it without help until about 20 April, using the short-term borrowing from public entities,” the source said.