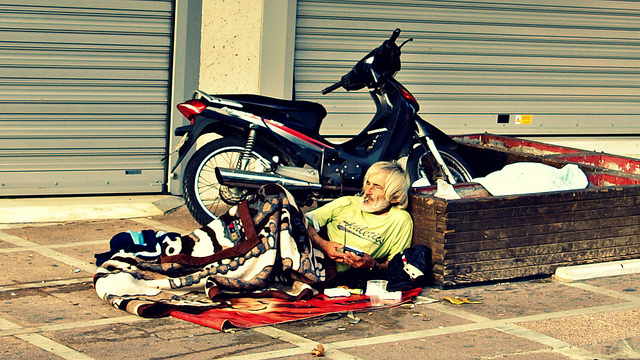 Since the debt crisis erupted in 2009, hundreds of thousands of Greeks have been made homeless. Syntagma Square, Athens. [linmtheu/Flickr}]

Greece laid out details of a new bailout plan to save it from the brink of financial collapse on Thursday night (9 July), offering a pensions overhaul and tax hikes in return for debt relief and a rescue loan from the eurozone.

The last-ditch package, handed in just two hours before a crucial deadline of midnight (2200 GMT) Thursday, closely resembled an offer put forward by Greece’s international paymasters before talks broke down last month, but there was no immediate word on whether it would be enough to unlock fresh aid.

“The Greek proposal… includes funding of the country’s financing needs… for three years, debt adjustment and a front-loaded investment package of €35 billion,” a Greek government source described the plan.

The “front-loaded investment package of €35 billion” has been promised by Commission President Jean-Claude Juncker. This is EU money already allocated for Greece, but which the country could not use given its precarious situation without some sort of special arrangements.

Eurozone officials will now study the details of the plan on Saturday before a make-or-break summit of all 28 European Union leaders the following day that could determine Greece’s future in the single currency and even the bloc as a whole.

The summit comes a week after Greeks overwhelmingly voted to reject a fresh bailout package offered by the country’s creditor institutions — the European Commission, the European Central Bank and the International Monetary Fund — in return for new tax rises and spending cuts.

The final crescendo of Greece’s long-running debt crisis forced the country’s banks to close last month, bringing the economy to a standstill, while a ban on transferring money out of the country has isolated Greece from foreign suppliers of everything from food to medicine.

Today, the Greek parliament will be asked to authorise Prime Minister Alexis Tsipras and other senior officials to hold new talks on the basis of this latest bailout offer.

The premier could face a challenge from hardliners in his Syriza party, who reject austerity measures on ideological grounds.

Under the new proposals, Greece’s leftist government, which swept to power in January promising to end years of painful austerity demanded under previous bailouts, agrees to creditors’ demands to discourage early retirement and seek higher health contributions from pensioners.

Taxes on shipping, corporate tax and a luxury tax will be increased, and a crackdown will be energetically pursued against tax evasion, according to a 13-page document released by Athens in the early hours of Friday.

>>Read: The Greek reform proposals, as published by Naftemporiki

Greece also pledged to raise sales tax revenue by 1.0% of gross domestic product (GDP), sell the state’s remaining shares in telecoms giant OTE and committed to privatising the ports of Piraeus and Thessaloniki no later than October.

But Athens also warned that the primary surplus targets it had already agreed to with its debtors – one percent of GDP this year, followed by 2.0% percent in 2016 and 3.0% in 2017 – would have to be revised because of worsening economic conditions.

Instead of abolishing a 30% tax break on all its islands, as requested by its creditors, the government said for now it will only scrap the measure on the wealthiest islands and those most popular with tourists.

And, whereas the creditors had demanded a €400-million reduction in military spending, Athens is offering to cut €100 million this year and €200 million in 2016.

In the latest proposals, Greece asks for €53.5 billion euros to help cover its debts until 2018, a review of primary surplus targets, and a “reprofiling” the country’s long-term debt.

Whatever the term, forgiving Greece’s debt seems unlikely. Germany, the Netherlands and several Nordic and eastern European states are hostile to another rescue and want to see Greece stick to reforms it has rejected, on taxes and pensions, before discussing debt relief.

“I have said that a classic ‘haircut’ is out of the question for me and that hasn’t changed between the day before yesterday and today,” German Chancellor Angela Merkel told reporters on a visit to Sarajevo.

German Finance Minister Wolfgang Schäuble, also on Thursday, conceded that IMF chief Christine Lagarde was correct when she said Greece was in need of some debt restructuring.

Economists consider that reducing interest rates and delaying repayment could save Greece more money than simply forgiving debt. Steve Peers, Professor of EU Law & Human Rights Law at the University of Essex, said he thinks Merkel means precisely that by saying that a “classic haircut” was out of question.

@GeorgiGotev I expect that means she won't agree to forgiving debt, but would agree to cutting interest rates & delaying repayment periods.

Council President Donald Tusk, who will host Sunday’s summit, made a statement yesterday, in which he spoke of “debt sustainability”.

But on the streets, ordinary Greeks were panicking over the realisation that, by voting to reject austerity in last Sunday’s vote, they brought their country to the brink of a messy exit from the euro, a so-called “Grexit”.

“I voted ‘No’ but I am for Greece staying in the eurozone,” said Viviane, a worried 46-year-old secretary in an Athens lawyer’s office, echoing a view held by many.

“I want an agreement and no matter if it contains austerity measures – that is still better than going back to the drachma,” sighed Stefanos, an unemployed 32-year-old.

The new bailout is the third Greece will have asked for since its debt crisis erupted five years ago.

Greece already received €240 billion in loans from the two previous EU-IMF rescues, the last of which expired on 30 June. In 2012, creditors also forgave €107 billion euros of its debt.

Private banks suffered the losses, but in exchange, the remaining Greek debt was “nationalised” at EU level, meaning that any new haircut would be at the expense of the European taxpayer.

Even if European governments would agree to a comprehensive package for Greece at the extraordinary EU summit on Sunday, the bailout still has to be ratified by the German Bundestag as well as by the parliaments of Finland, Slovenia and Estonia. The Greek parliament is due to vote to ratify the measures today.