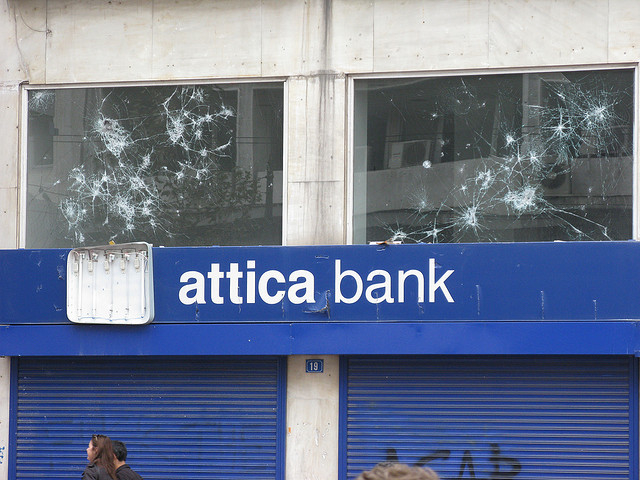 Greeks stepped up bank withdrawals last month when the threat of a government collapse grew, but the money has largely remained in the country with no sign so far of a full-blown capital flight as in 2012, Greek bankers familiar with the matter said.

Household and corporate deposit withdrawals were estimated at about 3 billion euros in December, three senior bankers said, a nearly 2% fall in deposits from November and marking the steepest decline since the peak of Greece’s debt crisis in June 2012.

“Depositors are concerned and closely watching the political thermometer as we get closer to the vote,” a banker at one of Greece’s four big lenders said. “But in no way are we seeing a replay of 2012 so far.”

Bankers and a senior central bank official said the withdrawals were partly due to Christmas and higher tax payments.

“There is no red alert that money is fleeing abroad. There were increased withdrawals to pay tax bills but money leaving household accounts flows into government accounts, staying in the system,” a senior central bank official said.

Some savers had taken precautionary steps like switching cash into bonds, buying mutual funds sold by banks based outside Greece or renewing deposits for a shorter term, the bankers said.

That remained a far cry from 2012, when the threat of Greece leaving the euro prompted Greeks to empty bank accounts.

Banks have lost €69 billion euros, almost 30% of their deposit base since 2010 when the debt crisis exploded.

“We are not experiencing the 2012 syndrome, the same scale of cash withdrawn to be stashed under the mattress or in safe deposit boxes, nor of money transferred abroad,” a Greek bank treasurer said, declining to be named.

Greek banks boosted liquidity buffers by €5 to €6 billion by tapping funds from the European Central Bank as a precaution against deposit outflows, the Greek bank treasurer said. The central bank declined to comment on the estimate.

That would push up the stock of ECB funding to Greek lenders to over €50 billion from €44.8 billion in November.

Greek banks have sharply reduced central bank borrowing, which peaked at €135 billion in June 2012, but still rely on ECB funding since quitting in early 2014 the more expensive emergency liquidity assistance (ELA) from the Bank of Greece.

But the ECB has warned that access to funding beyond February, when the European Union’s funding for the country’s bailout programme technically ends, will depend on Athens successfully completing a final bailout review and reaching a deal on a follow-up plan with the EU/IMF.

If the ECB withdraws access by making sub-investment grade Greek collateral ineligible, banks will have to return to ELA funding. Bankers said this would not upset the system’s liquidity balance but would add to banks’ funding costs and eat into their net interest margins. The ECB will still retain leverage as its approval would be needed.

“If the new government opts for a clash with lenders, it would give the ECB an alibi to remove its waiver on collateral eligibility,” the bank treasurer said.

“This does not mean the plug is being pulled while you are in intensive care, but it starts a chain of events that may point to turbulence ahead if the liquidity squeeze intensifies.”

Despite a pledge by the radical leftist Syriza party, which is poised to win the election, to abandon the EU/IMF bailout, bankers expect the two sides to avoid a major clash that prompts the ECB to cut off funding.

“I expect there will be compromise,” one banker said. “Greek banks are part of Europe’s banking system, which is unlikely to want to undermine itself, as long as sanity prevails.”