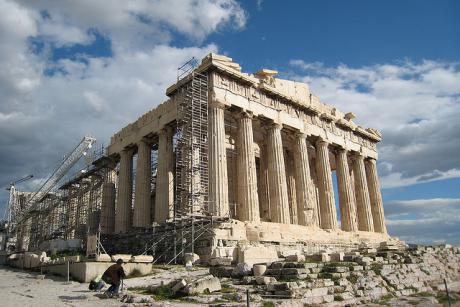 As Greek parliamentary elections draw closer, the German government is divided over the possibility of a Grexit if austerity is abandoned by the new Greek leadership. [Titanas/Flickr]

The German government rejects accusations of meddling in the Greek election campaign, but has not denied rumours that it considers a eurozone exit viable for Athens. EURACTIV Germany reports.

At a press conference in Berlin on Monday (5 January), German Chancellor Angela Merkel’s spokesman refused to comment on the Greek elections.

“Surely, all discussions over possible election outcomes are already taking place in Greece. Here, there is no need for a German government spokesman to call in from the sidelines,” Steffen Seibert said.

The spokesman repeatedly emphasised that there has been no change of course within the German government regarding Greece.

“From the start, the German government’s position and that of its European partners has been to stabilise and strengthen the eurozone – with all of its members, including Greece. Absolutely nothing about this has changed,” he assured.

Asked whether his statement was a denial or confirmation of the Spiegel report, Seibert said, “It is up to you, how to understand it.” The German government is not debating this issue, he commented. “What I am presenting here is the position of the entire German government”, he pointed out.

Over the weekend, Der Spiegel cited sources indicating that Merkel and German Finance Minister Wolfgang Schäuble were now confident the euro could survive a Greek exit from the eurozone. The report was strongly denied by Economy Minister Sigmar Gabriel who said the eurozone could not be “blackmailed”.

The German government expects Greece to continue to service its loans toward overcoming the financial crisis, despite the upcoming parliamentary elections, said a Finance Ministry spokesperson. A loan default is not considered a possibility at the moment, she emphasised.

“It makes absolutely no sense, to discuss any hypothetical models or calculate any overall burden. We expect and assume that Greece will stick to the treaties,” the Finance Ministry spokesperson said.

Meanwhile, the tone among German government parties over a possible Greek exit from the eurozone is heating up. “If the Greeks are not ready to continue on the path of austerity and reforms, they must leave the eurozone,” vice faction leader for the centre-right parties, Michael Fuchs, told Die Welt on Monday.

MEP Markus Ferber from the conservative Bavarian Christian Social Union (CSU) told the newspaper, “If the Greeks want to return to the same routine of wastefulness under Tsipras as the possible head of government, then they should do so. That is a sovereign choice of the Greek people. But in that case there will be no more aid from the EU.”

Bavarian Finance Minister Markus Söder (CSU) warned against “excessive, hasty steps”. Previously, he had also not considered a Greek exit from the eurozone to be a “nightmare scenario”, Söder told the Süddeutsche Zeitung. But “a conscious decision was made to follow a different path. Now this one must be seriously continued,” he said. For this reason, Söder pointed out, “threatening the Greeks” makes little sense.

The report in Der Spiegel refers to sources in the German Chancellery and the Federal Finance Ministry, which are both currently led by the centre-right. The Social Democratic Party’s vice faction leader, Carsten Schneider, told Deutschlandfunk Radio: “It is certain circles that are cited here. It is clearly coming from the direction of the centre-right. It is my concern, that this is more about the domestic issue in Germany, over how the [Eurosceptic] AfD should be confronted.”

Schneider expects a clear disclaimer from the German Chancellor. “Der Spiegel is a serious paper. I assume that there is a kernel of truth in this.”

After the government's candidate for president failed to win the vote in December, the Athenian Parliament must now undergo new elections on 25 January.

Polls indicate a lead for the leftist Syriza party, which rejects the tough austerity course of the previous government.

Syriza’s leader Alexis Tsipras has indicated a change of course if he wins the election. In that case, he has announced his intention to negotiate with contributors over further debt waivers and end the austerity measures.

In recent years Greece has benefited from a total of around €240 billion in international financial assistance. The country’s national debt is currently higher than €320 billion.