Grexit supported by 1 in 2 Germans 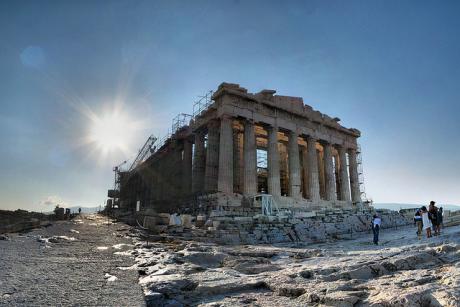 A FOCUS survey reports that 48% of Germans are in favour of Greece leaving the eurozone. 29% of respondents said they supported Greece keeping the euro, and 23% is undecided. EURACTIV Germany reports.

Divided according to party affiliation, the survey showed most of the Grexit-supporters belonged to the Eurosceptic Alternative for Germany (AfD). 82% of AfD followers responded in favour. Results among centre-right voters was at 47%, with 43% among Social Democrats. A majority of supporters of the Green party (47%), Left party (41%) and the liberal FDP (40%) were for Greece remaining in the eurozone.

Regarding the debt haircut currently up for debate, 44% of Germans expects such a write-off, with a majority of respondents from almost all parties predicting this: 42% of Social Democrats, 48% of the liberal FDP, 54% among Greens and 58% in the Left Party.

Only a majority of centre-right voters does not expect a debt haircut to come about. 40% of this group responded  that the debt write-off would take place, with 45% predicting the opposite.

Economic affairs analyst Lars Feld warned Greece against leaving the eurozone. “The Greek government is continuing to play the cowardly game, without recognising that it is about time for cooperative behaviour,” Feld told Handelsblatt.

“A factual Grexit as collateral damage of this policy is harmful for Greece, first and foremost,” he pointed out. The eurozone would be able to deal with such a scenario, Feld said.

“Without a [reform] programme, it is difficult for Greece,” said German Finance Minister Wolfgang Schäuble in Istanbul at the G20 meeting of finance ministers.

If Athens wants a financial bypass from its European partners, “we need a programme”. Otherwise, Schäuble said, it is not clear to him how the country expects to continue. “I do not understand how the Greek government hopes to stem that,” the Finance Minister commented. He indicated his readiness to provide assistance, “but if my assistance is not wanted that is also alright”.

“Time is running out for Greece and Europe,” explained Udo Bullmann, chairman of the Social Democratic Party (SPD) MPs in the European Parliament on Tuesday (10 February).

State Finance Secretary Steffen Kampeter emphasised the German position that Greece cannot one-sidedly terminate a contract. There is room for negotiation in this condition, but Greece must still move, he said on the television broadcaster ARD.

The European Finance Minister made his position clear. “It is not up to Europe to consider what should be done, but the Greeks to reconsider their position,” he said. He said he hopes there will be a signal to this effect on Wednesday (11 February).

German Chancellor Angela Merkel has called on Greece to present a clear plan for solving the debt crisis.

The eurozone’s finance ministers will come together for a special meeting in Brussels on Wednesday. There, Yanis Varoufakis is expected to present a concrete plan for financing Greece in the near future. In addition, European Commission President Jean-Claude Juncker is expected to take mediation initiative.

The current bailout programme is scheduled to expire on Saturday, 28 February. As a result, no new funds would be made available to Greece starting in March. Insolvency threatens to take hold. An extension of the bailout programme, even by only one day, must be approved by the creditors.

Beginning on 11 February, the European Central Bank (ECB) will no longer accept Greek bonds as securities, making it considerably more difficult for Greek banks to receive funding from the central bank.

The new Greek leadership got off on a tour of European capitals last week (2-6 February) to seek more favourable terms to the country's EU/IMF bailout.

0 responses to “Grexit supported by 1 in 2 Germans”