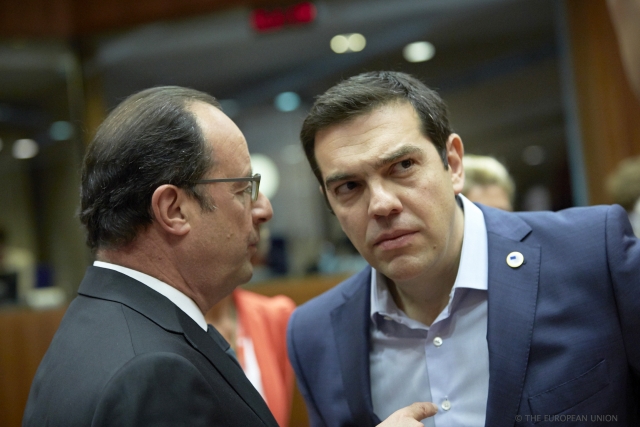 A new bailout should be agreed by late August, Greece’s Prime Minister Alexis Tsipras and French President François Hollande said on Thursday (6 August). Greece is in negotiations with the European Union and International Monetary Fund for as much as €86 billion in fresh loans to stave off financial ruin and economic collapse.

Tsipras said the new deal would be agreed soon after Aug. 15; Hollande said by the end of the month. The two men were speaking in Egypt on the sidelines of a ceremony to inaugurate the New Suez Canal.

It will be Greece’s third bailout since its financial troubles became evident more than five years ago. Negotiations in the past have been heated, but all sides are reporting progress this time around.

An accord must be settled — or a bridge loan agreed — by Aug. 20, when a 3.5 billion euro debt payment to the European Central Bank falls due.

In a statement, Tsipras’s office in Athens said he and Hollande had agreed that the deal “should and could be concluded right after Aug. 15”.

That would give enough time for the Greek parliament to approve it to enable the Aug. 20 repayment to the ECB.

“They also agreed that everything should be done for the Greek economy to rebound, especially after the effects of the banking crisis,” the statement said.

Greece’s banks are in need of recapitalisation by 10 billion to 25 billion euros, according to the EU.

France has been generally supportive of Greek requests for aid, contrasting with a harder line taken by Germany which has demanded stringent reform and austerity measures from Athens.

Hollande, speaking to reporters in Egypt, said: “The objective is for the negotiations on the (bailout) programme to be concluded at the end of August. We know it’s difficult but we must make sure that the conditions are met, in a good spirit.

“For now I believe the atmosphere is right and discussions are going in the best of directions,” he added.

A European Commission spokeswoman said earlier in Brussels that talks with Greece on a third bailout were moving ahead “in a satisfactory way” and reaching an agreement was possible before Aug. 20.

However, German newspaper Bild cited a government official saying that an agreement in the next two weeks is “not achievable”.

If a pact was not secured, Greece might be offered a bridge loan to cover the ECB payment, but Athens has said it only wants to sign up to strict conditions for a full bailout, not a temporary one.

Part of the money is expected to go to recapitalise Greek banks, a factor that has hammered banking sector stocks for most of this week because it hurts existing shareholders.

The stocks surged 17.8% on Thursday, but only after a three-day rout that wiped 63 percent from their market value.

The IMF said that Greece had paid it about 186.3 million euros in interest charges that were due it on Thursday.

When creditors agreed in July to negotiate a deal aimed at keeping it afloat and in the euro zone, Greece committed to implementing major reforms, such as scrapping early retirement, by the end of October. Lenders want, for example, an increase in the retirement age to 67 from the nominal 62 that falls significantly depending on the number of years worked and family status.

Technical teams also discussed tax, justice and corruption issues and about setting up a new Greek privatisation fund and about bad loans.