The IMF has reported that one of the largest financial institutions in the world, Deutsche Bank, “appears to be the most important net contributor to systemic risks, followed by HSBC and Credit Suisse”. Within the scope of its Financial Sector Assessment Programme, it also said that the German banking system poses a greater threat of contagion externally, rather than internally.

In a worst-case scenario, this essentially means that Deutsche Bank is so important to the global financial network, that its collapse could be disastrous to the banking sector. 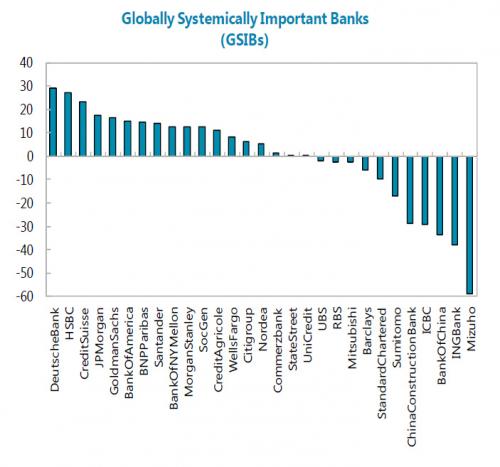 “In particular, Germany, France, the UK and the US have the highest degree of outward spillovers as measured by the average percentage of capital loss of other banking systems due to banking sector shock in the source country,” the Washington-based organisation said.

The case of Deutsche Bank, which just failed the US Federal Reserve’s stress test for the second consecutive year, underlines the need for risk management, intense supervision of large banks and close monitoring of cross-border exposures.

The IMF concluded that Germany needs to closely examine whether its banking and liquidation plans are indeed implementable, as well as ensuring whether the relevant authorities can maintain control over a bank if resolution actions take time to come into force.

After the IMF delivered its somewhat damning verdict, Deutsche Bank’s value on the Frankfurt Stock Exchange fell by 3.2%.

European Central Bank President Mario Draghi said on Tuesday (21 June) that the ECB is ready for every scenario after Britain’s referendum on EU membership, but warned that liquidity was vital to prevent investor panic after a vote for Brexit.

In other financial news, a survey conducted by Bloomberg showed that the chances of Deutsche Börse taking over the London Stock Exchange, in a deal that has long been in the making, have fallen to just 26% in the wake of the UK’s decision to leave the EU.

One of the main obstacles that has emerged after the Leave vote triumphed is German unwillingness to have the joint headquarters of the two exchanges based in London.