IMF’s ‘never again’ experience in Greece may get worse

For the International Monetary Fund, five years of playing junior partner in European bailouts for Greece has been a “never again” experience, and the worst may be yet to come.

The global lender has lent far more to Athens than to any other borrower, contributing nearly one-third of the total 240 billion euros, with the rest coming from eurozone governments and the bloc’s rescue fund.

But it has sat uncomfortably in the side-car of the Greek rescue. Called in by EU paymaster Germany to try to keep the European institutions and the Greeks honest, the Washington-based IMF has never had control of the programme.

Now Greece may be about to become the first European nation to default on the IMF, putting it in exclusive company with Zimbabwe and Argentina.

Athens postponed a 300 million euro installment due last week and bundled it with others due this month into a single 1.6 billion euro payment due to the IMF at the end of June.

Greece has said it can only pay if it gets new funds from creditors or is allowed to sell more short-term debt to Greek banks, which in turn hinges on a stalled cash-for-reform deal.

Critics say the IMF has damaged its credibility by going along with political fudges to keep Greece in the eurozone, rather than insisting on writeoffs, first by private creditors and now by European governments, to make its debt sustainable.

“One of the most important lessons for the IMF from the Greek programme should be that a multilateral institution should not institutionalise special interests of a subset of its membership,” said Ousmene Mandeng, a former IMF official who is now an economics adviser.

“The interest of the IMF is not necessarily aligned with the EU/ECB,” he said.

In 2013, the IMF published a critical evaluation of its own role in the first Greek bailout in 2010, arguing that it should have insisted on a “haircut” on Greece’s debt to private creditors from the outset. Instead, it went along with European governments frightened of a Lehman-style market meltdown and keen to shield their banks from losses.

The report, compiled by Fund staff, said IMF officials had doubts about Greece’s ability to repay its loan at the time but agreed to the plan because of fears of contagion from Greece’s predicament affecting other European states. 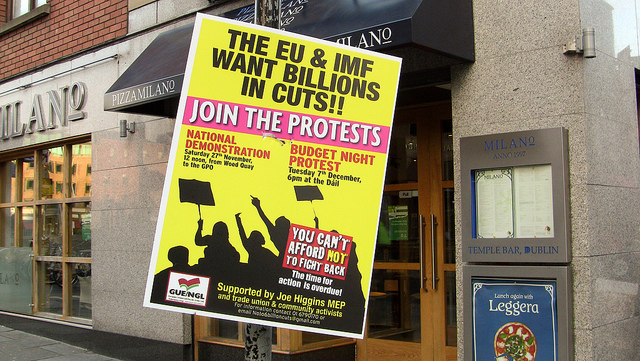 The IMF brand has been damaged by the economic crisis. Ireland, 2010.

A 2010 IMF staff position note described default on any debt in advanced economies as “unnecessary, undesirable and unlikely”, yet 18 months later, the IMF advocated a 70 percent “haircut” on Greek government debt as a condition for continued involvement in lending to Athens.

Now IMF chief Christine Lagarde is hinting that European governments need to give Greece debt relief to make the numbers add up, but since this is politically unacceptable in Germany, she has had to talk in code in public.

“Clearly, if there were to be slippages from those (fiscal) targets, for the whole programme to add up, then financing has to be considered,” Lagarde told a news conference last week.

Behind closed doors, IMF officials are telling the Europeans that Greece will not survive without a third bailout programme, which will require debt restructuring by European governments.

The IMF insists on being repaid in full and is not expected to lend any more to Athens. But Berlin and its allies want the Fund to remain involved in enforcing any follow-on arrangement for Greece, because they trust its expertise and discipline.

Eurozone ministers agreed in 2012, when they extended the maturities of some loans to Athens, cut the interest rates, and allowed a 10-year moratorium on interest payments, that they would consider further relief if necessary once the current programme is successfully completed.

The IMF has also come under attack for more traditional reasons over its role in the Greek negotiations.

Leftist Greek ministers have singled out the Fund in recent weeks for demanding cuts in payments to the poorest pensioners and refusing to allow collective wage bargaining in line with International Labour Organisation standards.

That sits uncomfortably with the more socially aware outlook which former managing-director Dominique Strauss-Kahn tried to foster at the Fund.

>>Read: Varoufakis: Greece’s creditors have turned negotiations into a war

IMF officials, speaking on condition of anonymity because they are involved in the talks, deny insisting on that specific pension payment cut, although the Fund is on record as saying Greece spends more than it can afford on pensions and needs to reduce the overall burden to make its debt sustainable.

“How exactly the Greeks achieve that goal is up to them. The Fund simply says, if you don’t make the savings that way, you have to do it a different way,” one IMF source said.

The Fund prefers to see its role as that of a truth-teller, making an objective assessment of a country’s ability to sustain its debt based on economic criteria such as interest rates and loan maturities, growth, productivity and the fiscal balance.

Insiders say privately it would love to get out of the Greek programme for good, but the Europeans may not let it.