Italy and Germany lost in translation over budget flexibility 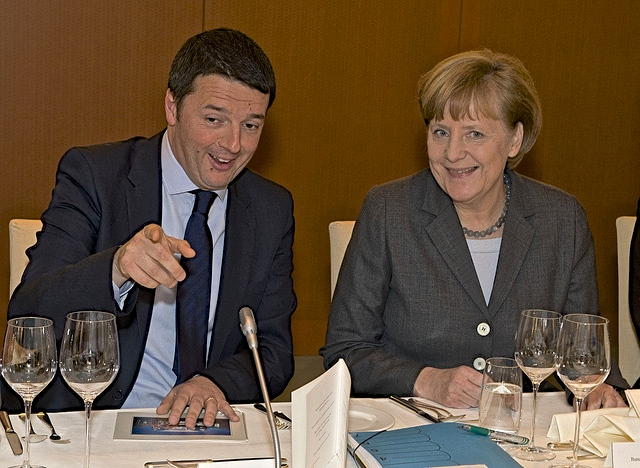 Italy and Germany are using the same words ahead of this week’s EU summit as debate heats up on whether economic policy should focus on budget austerity or stimulating growth, but they do not necessarily mean the same thing.

Italian Prime Minister Matteo Renzi, buoyed by success in last month’s EU elections, has led calls for a new direction, saying battered southern economies can take no more of the medicine that has crushed growth and sent unemployment soaring.

He has avoided asking for a change to the bloc’s budget rules which limit government deficits and debt, saying all Italy asks is to use the margins for flexibility they already contain.

He and French President François Hollande are also calling for a big European public investment programme in energy and broadband networks to boost growth and create jobs.

“We have always said that we will respect the rules but there are different ways of looking at the question of rules and how to respect them,” Renzi told parliament yesterday (24 June), setting out priorities for Italy’s six-month EU presidency.

He lashed out at what he called the “high priests” of austerity, saying that without growth in Europe, there could be no hope of fiscal stability.

“Stability without growth becomes immobility,” he said, adding that the EU must stop acting “like a nagging old aunt” giving countries endless lists of what to do.

What Seibert said was that the EU’s Stability and Growth Pact already contained scope for flexible application in individual cases. Countries facing a downturn could get more time to cut their deficits and those with deficits in order could have more room for spending on investment.

“What’s clear is: the Stability and Growth Pact cannot be called into question,” he told a regular news conference.

His remarks, made during a visit to France, were swiftly “clarified” after a discussion with Merkel and the line was reinforced that no change to the pact would be contemplated.

Under the watchful eye of fiscal hawks ranging from Finance Minister Wolfgang Schäuble to Bundesbank chief Jens Weidmann and the influential Frankfurter Allgemeine Zeitung, Merkel has been careful not to contemplate any relaxation of the rules.

Yet one German official, speaking on condition of anonymity, said Berlin’s insistence on sticking to the rulebook masked a recognition that some adjustment was necessary.

“There is a widely-shared realisation that the government’s emphasis so far on growth-friendly consolidation policies is perhaps no longer sufficient. I think there is consensus on that,” the official said.

“The chancellor and Gabriel have made it clear that the Stability Pact rules won’t be changed, so it needs creative thinking about how to generate additional growth.”

That offers some scope for a real, if limited policy inflection at the summit on 26-27 June. Its draft conclusions obtained by EURACTIV do not make such openings at this stage.

Italy has not been explicit about what it expects from its partners and much could turn on whether they are ready to take Renzi at his word when he promises ambitious structural reforms. His reform timetable has already slipped from a promised three months when he took power in February to promising on Tuesday that the package would be implemented by 2017.

France, the EU’s other major laggard in reforming labour markets, pensions, welfare and the tax burden on business, called in proposals issued on Tuesday for a big EU public investment drive and a new drive for social and tax harmonisation in the euro zone.

Like Paris, which also wants more budget flexibility, Italy has long struggled to implement structural reforms to unlock growth in its sluggish economy, which is smaller now than it was in 2000, according to national statistics office ISTAT.

Officials have spoken about excluding investment spending from deficit calculations or winning more time to bring the budget back into structural balance, adjusted for the ups and downs of the business cycle.

However, EU officials note that Italy is second bottom of the table of countries able to absorb project funds from the European Investment Bank (EIB), raising doubts about how much of a boost if would be likely to get from any new programme.

Rome’s deficit is just within the EU’s 3% of GDP limit but it has one of the biggest debts in the world, expected to top 135% of GDP this year. Italy also faces a steep challenge from the so-called fiscal compact rules that impose strict benchmarks for bringing debt down year by year.

EU rules leave some room for countries like Italy, which are not subject to the bloc’s excessive deficit procedure, to exempt some categories of expenditure from deficit calculations.

However, France’s deficit is officially forecast to be 3.8% of GDP this year and the country’s fiscal watchdog and court of auditors have cast doubt on its ability to meet a promise to bring it down to 3 percent next year.

EU leaders are preparing for the 26-27 June regular Spring summit, the first day of which will be spent in in Ypres for a ceremony to mark the centenary of the outbreak of World War I. The event will begin in the late afternoon, and will be followed by a dinner. The next day, leaders will hold working sessions in Brussels as usual.

Ukraine, Moldova and Georgia to sign EU Association agreements during the summit.