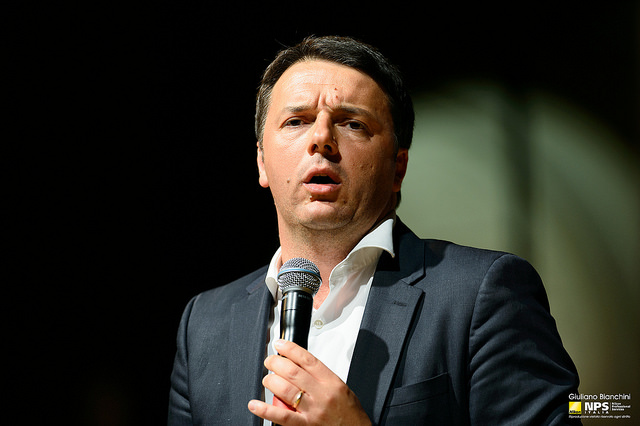 Italy and its allies will receive no special leeway in meeting EU budget rules, the influential chairman of eurozone finance ministers said on Tuesday (8 July), as Germany resisted attempts to soft-pedal on long-promised spending reforms.

Italy, leading a drive for greater flexibility in the way the rules are applied to encourage economic growth and investment, has the second-highest public debt in the eurozone as a proportion of national output, after Greece.

Italian Prime Minister Matteo Renzi, pressing his campaign for greater fiscal flexibility, said all the money governments invested in broadband networks should be stripped out of the calculation of public deficits.

“Every euro spent in digital infrastructures must be out of the box,” Renzi said in English at a conference in Venice.

Italy opened the first finance ministers’ meeting of its European Union presidency by calling for “incentives” to reform after years of rigid focus on budget austerity. But Rome faced immediate resistance, including from Germany.

“Italy is delivering reforms and, as chairman, my goal is to help every country to find incentives to do reforms,” Italian Economy Minister Pier Carlo Padoan told reporters.

Padoan chairs meetings of the 28 EU finance ministers, a key forum for any change in the direction of economic policy.

Before the session began, Jeroen Dijsselbloem, head of the 18-nation Eurogroup of ministers from the single currency area, painted Italy’s reform effort in an unflattering light and insisted Rome would get no special leeway.

“Competitiveness has to improve and economic growth has to pick up and lots of work needs to be done there,” he said. “Italy has been showing almost zero growth of productivity for many years and that has to improve.”

In part of the meeting that was broadcast, German Finance Minister Wolfgang Schaeuble cautioned peers against slacking on budgets, saying that structural reforms were no alternative to reining in excess spending or “fiscal consolidation”.

Austrian State Secretary Jochen Danninger voiced similar scepticism. “The existing rules are to be respected to the letter,” he told journalists ahead of the meeting.

“Within the framework of these rules, there is enough flexibility, so no weakening of the rules.”

Italian ministers have hinted at the possibility that public investments on schools and road and rail infrastructure should also not be counted towards its budget deficit.

They have also worried about rules that will require Rome to reduce its overall debt level as the economy, just out of recession, is struggling to grow.

Italy’s debt is projected to reach 135% of output at the end of the year. Under EU rules, governments have to strive to balance their books and cut public debt to 60% of gross domestic product within 20 years.

The ministerial debate took place as Jean-Claude Juncker, the designated president of the European Commission, began meeting political groups in the European Parliament to outline his policy program.

The debate about whether to let governments loosen their purse strings or make them stick to austerity played a big part in his questioning by lawmakers, participants said.

In his first meeting with the Socialist group, Juncker conceded that there had been “weaknesses on the social side” in the rescue of the euro currency during the financial crisis.

He emerged from the meeting saying that a centre-left Social Democrat would probably take the powerful post of EU economic and monetary affairs commissioner, which oversees euro zone national budgets. The post has been held by center-right liberal Olli Rehn since 2009.

The former Luxembourg prime minister and Eurogroup chairman, who has put measures to encourage growth at the center of his agenda, is sympathetic to anti-austerity arguments.

Nonetheless, he believes there are limits to the budget leeway that can be granted and the rules should not be altered.

“The stability pact will not become the flexibility pact,” he told Social Democrats, referring to the EU budget rules, according to one person present at the meeting.

Supported by the main pro-European centre-right, centre-left and liberal groups, Juncker is expected to win approval from the EU legislature in a vote on July 16.

EU leaders nominated him last month despite opposition from Britain, which depicted him as an old guard federalist and Brussels insider, unsuited to the task of shaking up the executive body which proposes and enforces EU laws.

A mini-summit organised on 21 June in Paris saw eight socialist heads of states call for loosening the EU's Stability and Growth Pact, which limits public deficits in the euro zone to 3% of GDP.

The concerted push came just days after Sigmar Gabriel, German vice-Chancellor and a member of the Social Democrat SPD party, advocated giving crisis-ridden countries more time to get their budgets in order.

Italian Prime Minister Matteo Renzi, buoyed by success in the EU elections, has led calls for the EU to take a new direction, saying battered southern economies can take no more of the medicine that has crushed growth and sent unemployment soaring.

He has avoided asking for a change to the bloc's budget rules which limit government deficits and debt, saying all Italy asks is to use the margins for flexibility they already contain.