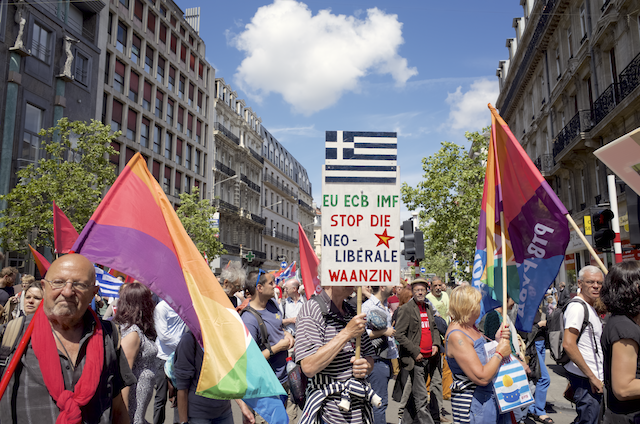 Commission President Jean-Claude Juncker made a last-minute offer to Athens in a bid to reach a bailout agreement before the deadline expires today (30 June), European Union and Greek government sources said.

Under the offer, Prime Minister Alexis Tsipras would have to send written acceptance by Tuesday, in time for an emergency meeting of the Eurogroup of eurozone finance ministers to be held and agree to campaign in favour of the bailout in the planned 5 July referendum.

However, there was little sign that Tsipras was prepared to drop his repeated rejections of the bailout offer, which he has dismissed as a “humiliation” for Greece.

A Greek government official said that it listened with interest to what was being proposed but said: “Alexis Tsipras will vote “no” on Sunday”.

Tsipras would have to send a written acceptance of the version of proposals from the lenders published on Sunday, with a pledge to campaign for them to be accepted in the planned 5 July referendum.

The offer published on Sunday incorporated a proposal from Greece that would set value-added tax rates on hotels at 13%, rather than at 23% as originally planned in the lenders’ proposals. It was not immediately clear whether there would be any additional changes.

If the offer were accepted, the eurozone finance ministers could adopt a statement saying that a 2012 pledge to consider stretching out loan maturities, lowering interest rates and extending an interest payment moratorium on eurozone loans to Greece would be implemented in October.

The offer would be conditional on a letter to Juncker, Eurogroup chairman Jeroen Dijsselbloem, German Chancellor Angela Merkel and French President François Hollande arriving in time to arrange an emergency meeting of the Eurogroup later today.

Meanwhile the uncertainty surrounding Greece is driving the European Union into legal limbo and no one has a clear answer as to what could happen next.

Greek Finance Minister Yanis Varoufakis has said Greece had no intention of quitting the eurozone and cannot be forced out.

The government in Greece, where a majority of people say they want to retain the euro currency and their 35-year-old membership of the European Union, correctly points out that neither the treaty creating the now 19-member eurozone nor the agreement binding the 28 member states of the EU, contains provisions for expelling any country.

Only the European Union treaty that came into force in 2009 imagines any departure, and that only when a state asks to leave.

In constructing the euro, European leaders were anxious to underline the message that the new currency was forever. The question that has now arisen is what happens if member state breaks the rules.

Even determining such a breach is problematic.

On Monday, a senior European Central Bank official said that a Greek exit from the euro could not be ruled out, especially if voters backed the government in a referendum on Sunday and rejected creditors’ offer of cash in return for budget cuts.

The prospect of default has jeopardized Greece’s access to euros under the control of the ECB in Frankfurt. Officials speculate that the Washington-based IMF and the ECB will delay actions that could trigger an abrupt cut-off of euros to the Greek banking system, at least until after Sunday’s referendum.

Greece imposed capital controls on Monday, in order to stem the flow of cash out of the country as it looks for short-term monetary stability. If the situation persists, however, notably beyond 20 July, when Greece must repay bonds held by the ECB itself, eurozone institutions may find it even more difficult to keep supplying Greece with cash.

European officials have said for some time that this could oblige the Greek government to start paying bills with alternatives to cash, such as some form of IOU (abbreviated from the phrase “I owe you”, meaning an informal document acknowledging debt), that might be denominated in euros but would be hard to spend and worth much less.

Technically and legally challenging, those affected might sue for payment in euros. Over time, this could lead to a return to a form of national currency such as a new drachma.

In a formal sense, Greece could remain in the euro zone.

But the Greek government has made clear that it does not want another currency.

Other eurozone states are reluctant to see Greece leave the bloc, partly for fear of rekindling investor suspicion that the currency area could break up and partly because they would face heavy losses on the value of loans to Greece.

The Athens government has insisted that Greece will remain in the euro and has threatened legal challenges to any action aimed at expelling it. Some legal experts have suggested that Greece could even challenge moves to halt its access to euros under the terms of the monetary union.