Questions are being raised over the architecture of the Juncker investment plan, while the finance world continues to grow impatient for these “project bonds on steroids”. EURACTIV France reports.

The 315 billion euro, three year investment plan is not ambitious enough for some member states, including France, who had originally called for a programme worth 1200 billion over four years. At present, only 2 billion euros from the European budget have been pledged to the fund.

The EU plans to provide the investment fund with a total of 8 billion euros, 6 billion of which had already been budgeted for the research support programme Horizon 2020, and the European Interconnection Mechanism (EIM), dedicated to developing European transport networks. These €8 billion are designed as a guarantee to secure a further 8 billion in contributions from the European Institutions, and the European Investment Bank will contribute a further €5 billion, bringing the investment fund’s initial capital to 21 billion euros. From this modest starting point, the Juncker Commission is counting on a fifteenfold “multiplier effect” to reach the €315 billion it has promised.

This gamble is based on the assumption that a private investment will be more efficient, and more likely to be profitable, than a public investment. 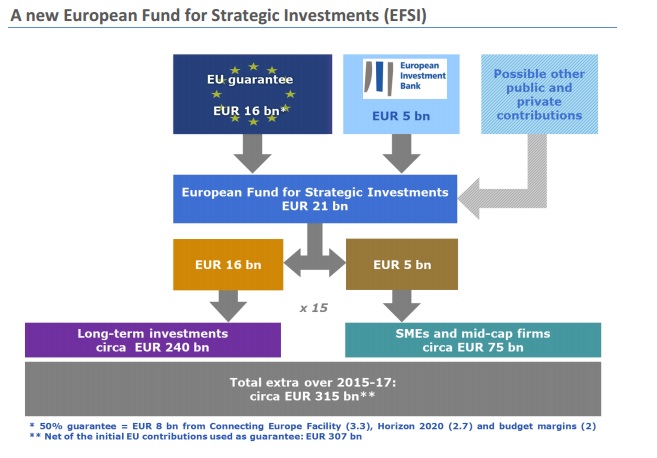 The fund’s participants are under no illusions: this new mechanism will not increase the total budget, and may well mean robbing Peter to pay Paul. The example of the Seine-Nord Europe Canal, one of France’s major ongoing infrastructure projects, illustrates this situation. The project will cost 4.5 billion euros, of which the EU had committed to contribute 60% from European Interconnection Mechanism (EIM) funds. But the EIM’s 5 year budget of €23 billion is due to be cut by 3.3 billion euros, in order to capitalise the Juncker investment plan.

The budget for the Seine-Nord Canal, which is one of Europe’s top five infrastructure priorities, along with the Lyon-Turin train line, could remain unaffected. But nothing can be taken for granted, and the new investment fund is still as vague as ever. France did not include these two projects in its list of proposals for Juncker plan funding, precisely because Paris would prefer them to continue being funded by the EIM, but the Lyon-Turin train line did appear on the Italian list.

Karima Delli, a French MEP, pointed out that the investment plan would “represent 16% less funding for European transport projects over four years”. She added that “what should have been an investment is really another cut to the European budget, which has already suffered massive reductions under the policy of austerity that continues to guide the Commission”.

Members of the European Parliament are broadly in favour of the investment plan, but would prefer to have a greater say over it. The new European Fund for Strategic Investments (EFSI) will be placed in the hands of the European Investment Bank (EIB) and administered by a panel of financial experts and representatives from the EIB and the Commission.

Chances of success called into question

Beyond the unanswered questions, the Juncker plan’s chances of success have also attracted criticism. Standard and Poor’s has highlighted the fund’s lack of initial capital as a possible stumbling block, and is not convinced that the proposed infrastructure investments will boost economic growth in Europe.

The extensive list of 2000 projects presented for consideration by the member states does little to assuage concerns: the projects come to a total value of €1,300 billion, and the Netherlands and the UK are the only countries to have indicated any order of priority on their lists.

The Juncker plan, or “projects bonds on steroids”

The success of “project bonds”, an EIB scheme for raising funds, appears to have demonstrated the appetite of European investors for guaranteed investments.

The projects financed by the European Fund for Strategic Investments, dubbed “project bonds on steroids” by one European civil servant, should meet an even greater demand from investors, allowing them to bring down their borrowing rates and, credit experts say, ensure their finances.

On 25 November 2014, the Commission revealed the details of its 315 billion euro investment plan.

The idea is to create a new European Fund for Strategic Investments (EFSI), with €5 billion coming from the European Investment Bank and an 8 billion guarantee from existing EU funds designed to secure a contribution of €16 billion in total from the institutions.

The €8 billion guarantee will come over a three-year period from the Connecting Europe Facility (€3.3 billion); Europe’s research programme Horizon 2020 (2.7 billion) and so-called “budget margin”, or unused funds, worth €2 billion.

The resulting EFSI fund totalling €21 billion is expected to generate 240 billion for long-term investments and €75 billion for SMEs and mid-cap firms over the period 2015-2017.

The plan drew questions over the lack of new cash, with some Members of the European Parliament calling it "recycling and re-labeling" of existing programmes.