Lagarde says Grexit is a ‘possibility’ 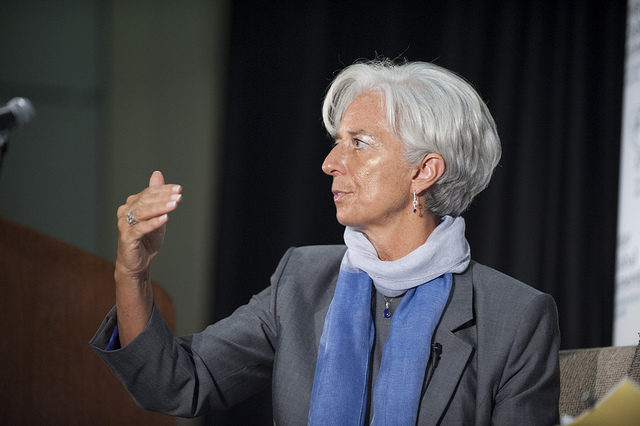 The head of the International Monetary Fund warned that Greece could fall out of the eurozone, as it struggled to sort out its debt standoff, which is adding to concern about the patchiness of global economic recovery.

The finance chiefs of most of the world’s biggest economies met in Germany against the backdrop of Greece’s unresolved crisis, rising oil prices and volatility in financial markets.

Japan’s finance minister expressed concerns about a “rough” fall in the value of the yen to its lowest level against the US dollar in more than 12 years, reflecting the contrasting outlooks for some of the world’s big economies.

Greece was not officially on the agenda of the Group of Seven meeting on Thursday in a former palace in the eastern Germany city of Dresden.

Policymakers listened to leading economists spell out ways they could finally shake off the effects of the global financial crisis which struck nearly eight years ago.

But with a payment deadline looming next week, the Greek crisis was high on their minds.

Christine Lagarde, the IMF’s managing director, a key player in the negotiations alongside the European Union, warned that the talks could yet fail, forcing Greece into a debt default and an exit from the eurozone.

‘Probably not’ the end of the euro

Lagarde was quotedby the Frankfurter Allgemeine Zeitung as saying that a Greek exit from the eurozone was a possibility. She said such a step would “not be a walk in the park” but would “probably not” mean the end of the euro.

The IMF chief also rejected Athens’ assertion that a deal with its creditors was imminent.

“It is very unlikely that we’ll reach a comprehensive solution in the coming days,” she said.

After positive signals had come from Greece 10 days ago, “we’ve been sobered again in the last week”, Lagarde said.

There was still a lot of work to be done, she said, and the IMF was not prepared to pay out more funds without a clear reform pledge.

“We have rules. We have principles. There will be no half-baked programme review,” Lagarde said.

Officials say a Greek default would not be as damaging to financial markets as it would have been a few years ago because most of the debt is now held by euro zone governments. But it would raise big questions about the risk of other countries also leaving the single currency if they run into trouble in future.

Washington has warned against complacency, saying few expected the scale of the crisis triggered by the bankruptcy of investment bank Lehman Brothers in 2008.

G7 sources said officials from the member countries — hosts Germany, the United States, Japan, Britain, France, Italy and Canada — were speaking “all the time” about Greece on the sidelines of the Dresden meeting.

Greece said on Wednesday that it was starting to draft a deal with creditors that would pave the way for fresh aid, but European officials denied that kind of progress had been made.

A top EU official said on Thursday that talks had to continue day and night, with a 5 June deadline approaching for Greece to pay back €300 million to the IMF.

“Talks … have progressed more in the last three weeks than in the last three months,” EU Economic Commissioner Pierre Moscovici said. “But we are not there yet and we have little time to find the necessary agreement.”

Meeting under the heading “Towards a Dynamic Global Economy”, the G7 finance ministers and central bank chiefs discussed economic reforms to increase their competitiveness.

Canada’s finance minister, Joe Oliver, said the rise in the US dollar — as the Federal Reserve prepares to start weaning the US economy off rock-bottom interest rates — had the potential to rock financial markets.

But a German G7 delegation source said the finance chiefs meeting in Dresden were not concerned by recent volatility on government bond markets.

“The general view … was that this was a correction after the extreme fall in yields we experienced beforehand,” said the source, speaking on condition of anonymity.

Canada and Germany renewed their calls for countries to focus on bringing down their budget deficits as the best way to get their economies growing again.

But in a reminder of the long-standing divisions among policymakers over the merits of austerity or public spending, US Treasury Secretary Jack Lew stressed the need for major economies to use a “full toolkit,” including fiscal policies to support growth and avoid deflation.

0 responses to “Lagarde says Grexit is a ‘possibility’”