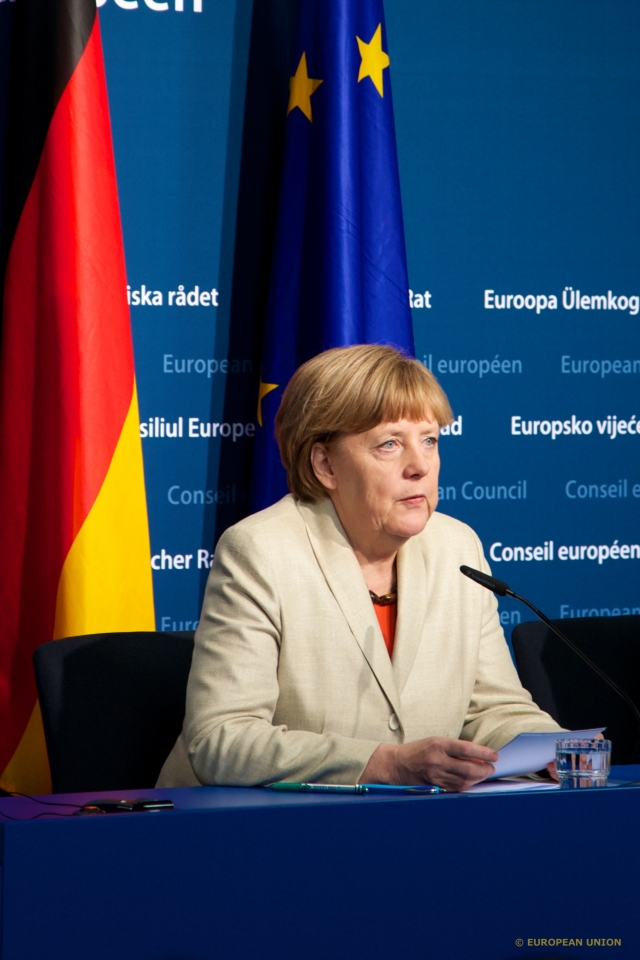 German Chancellor Angela Merkel said on Thursday (23 April) everything must be done to prevent Greece running out of money before it reaches a cash-for-reform deal with its international creditors, amid heightened concern that Athens is nearing the brink.

Merkel, Europe’s pre-eminent leader, was speaking after a meeting she called “constructive” with Greek Prime Minister Alexis Tsipras on the sidelines of a European Union summit in Brussels. She said they had agreed to keep the contents of their discussion confidential.

Asked how great the risk was of Athens running out of cash before any agreement was reached with its official lenders, she told a news conference: “Everything must be undertaken to prevent that.”

Tsipras told reporters they had noted significant progress had been made in the negotiations and added, “We have covered a large part of the distance.”

He said he was very optimistic and that they had moved closer to a deal on an economic reform programme that would unlock frozen bailout funds. A Greek official reported “convergence” with Merkel on some issues including a lower budget surplus target for Greece.

However, EU officials cautioned that wide differences remain over reforms of the labour market, pension system, taxation and public finances, and much work remained to produce a binding, detailed agreement.

Eurozone finance ministers meet in Riga on Friday to review progress — or the lack of it — in the slow-moving negotiations between Athens and its creditors. European Commission Vice-President Valdis Dombrovskis said there had been little progress and he was getting worried about Greece’s financial position.

The Greek official said there was “convergence” that Greece would aim for a primary budget surplus – before debt service – of 1.2 to 1.5% of gross domestic product this year. That is far below the goals of 3% in 2015 and 4.5% in 2016 set in Greece’s 2012 EU/IMF bailout programme.

The “convergence” also covered privatisations, of which he gave no details, and making Greece’s general secretariat for revenues independent of the finance ministry, he said.

While Greece has pushed for a loose political agreement, Germany, its biggest creditor, has insisted it is up Athens to satisfy representatives of the European Commission, the International Monetary Fund and the European Central Bank first.

Greece has yet to agree with its partners on a comprehensive list of reforms to secure €7.2 billion remaining from its €240 billion EU/IMF bailout. Without a deal, investors fear it could run out of money and default on its official creditors, possibly forcing it to leave the 19-nation single currency area.

Eurozone and Greek officials said on Wednesday that Athens could probably scrape together public cash reserves to meet its payment obligations into June, but it faces a hump of bond redemptions to the ECB in July and August that it cannot meet without a fresh injection of funds.

“We can’t wait for a deal in June due to our liquidity problems. We must find a solution before that,” a government official in Athens told Reuters on condition of anonymity.

The ECB’s chief economist, Peter Praet, said the central bank was prepared to keep authorising emergency lending to Greek banks for now because they were assessed to be solvent.

“It is true that it is a stressful situation,” Praet said at an event in Berlin. “I’m not going to discuss how long this will go on. Verbal discipline is of the essence in crisis times.”

The ECB agreed on Wednesday to raise the cap on emergency liquidity assistance to Greek banks to €75.5 billion and did not toughen the conditions on collateral they have to present for funding, banking sources said. The ECB’s Governing Council is reviewing the Greek lending weekly.

EU officials said Brussels was pressing Athens to move ahead with other measures, such as a radical shake-up of product and service markets to sweep away privileges and protections for vested interests, as well as greater fairness in taxation to shift the burden to the better-off and improve collection.

They are also looking for progress on privatisations, which leftist ministers halted when they took office in late January.

Greek daily Kathimerini reported that Athens is considering asking the eurozone’s rescue fund to buy Greek government bonds held by the ECB to pay for debt redemptions due this summer.

That would amount to a third Greek bailout requiring euro zone governments’ agreement and parliamentary approval in some countries, such as Germany and Finland, which could only be achieved if there were a deal on a comprehensive reform package.