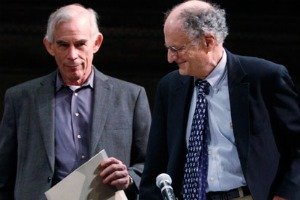 Two Americans were awarded the Nobel prize for economics yesterday  (10 October) and said they had no easy answers for the debt crisis plaguing Europe, but stressed a fiscal union can avoid the collapse of the euro.

Christopher Sims and Thomas Sargent were awarded the prize by the Royal Swedish Academy of Sciences for their work on macroeconomic analysis that governments can use to gauge the effects of policy.

But even without any clear answers on a way out for Europe from its debt crisis, Sims said the euro zone must create a fiscal union to avoid the collapse of its common currency.

"If the euro is to survive, the euro area will have to work out a way to share fiscal burdens," Sims said in a press conference at Princeton University, where he is a professor.

Governments of the 17-nation euro zone are trying to resolve a debt crisis that threatens to spread from weaker economies in Greece, Portugal and Ireland to the region's bigger counties, including Italy.

The two American economists conducted separate research in the 1970s to model cause and effect in economies, including the complex interplay of tax and interest rate policies with the expectations of people and businesses.

"Panics and crises, … what's going on in Europe now with the euro, that's all about expectations about what other people are going to do," Sargent, 68, a professor at New York University, said in an interview aired on the Nobel Prize organization's website.

For example, government spending to help a flagging economy could be less effective when people see the limits to state finances and expect the stimulus spending to run out.

But, while his research had provided ideas about how expectations influenced policies and their impact, Sargent cautioned that he, like Sims, had no simple solution to the global economic crisis. "We try to experiment in our models before we wreck the world," Sargent said.

But, he added, "the methods that I have used and that Tom has developed are essential to finding our way out of this mess."

A way out of the US economic woes

The two Nobel prize winners said they also did not have any magic bullet for solving the U.S. economy's woes, but Sargent criticized the way in which the country's fiscal problems are often discussed.

Some promises made by the U.S. government, namely those regarding taxes or government pension and health programs for retirees, simply will not be honored, he said.

"It's not clear which of these incredible promises will be broken first," Sargent said.

Lawmakers in Washington are grappling with how to reduce the United States' budget deficit, which stood $1.3 trillion, or 8.6 percent of gross domestic product, for the recently ended 2011 fiscal year. The battle has sparked sharp partisan debate over spending cuts versus tax increases.

Sargent developed a mathematical model in his work and described it in a series of articles in the 1970s. Sims wrote an article in 1980 which introduced a new way of analyzing data using a model called vector-autoregression.

"If we want to understand the role of economic policy in the society, we must have a notion of cause and effect," said Tore Ellingsen, from the Stockholm School of Economics and another member of the prize committee.

"And these methods help us to look at historical data and disentangle what caused what. This is used very widely. Finance ministries, central banks, universities … all over the world."

The Nobel prize for economics, officially called the Sveriges Riksbank Prize in Economic Sciences in Memory of Alfred Nobel, was established in 1968. It was not part of the original group of awards set out in dynamite tycoon Nobel's 1895 will but was established by Sweden's central bank, the Riksbank.