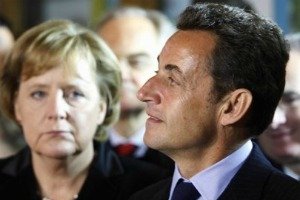 In addition to the EU and eurozone twin summits on Sunday (23 October), another summit will take place "at the latest on Wednesday", France and Germany said yesterday (20 October) after a tense day of hesitation and conflicting announcements.

Sarkozy and Merkel will first meet Saturday evening (22 October) on the sidelines of the European People's Party dinner ahead of Sunday's twin summits.

A joint Franco-German statement posted on the website of the Elysée Palace mentions the three areas where the leaders still seek agreement:

On the basis of the package of austerity measures approved by the Greek parliament yesterday, as well as the latest EU-IMF report, France and Germany call for negotiations with the private sector to "start immediately" with the aim of "reinforcing the sustainability" of Greece's public debt.

According to insiders, Germany had proposed that the Sunday twin summits be scrapped until Paris and Berlin reach agreement on how to boost the firepower of the EU's €440 billion bailout fund, the European Financial Stability Faciltty.

But Sarkozy had insisted on keeping the summit, which had already been postponed once, to agree on a "comprehensive" solution to the euro zone debt crisis for the November G20 summit in Cannes.

France and Germany disagree over bank recapitalisation and the best way to bolster the €440 billion EFSF facility, with Paris fearing its triple-A credit rating could come under threat if the wrong method is chosen.

In Berlin, Angela Merkel had to face parliamentarians in the German Bundestag, who insisted on giving the chancellor a mandate ahead of the summit following a decision by the German constitutional court that gave them powers to oversee decisions on the EFSF.

Merkel "now has to crawl back to the Bundestag each time where she gets on a plane," said Eurointelligence, an online service of comment and analysis of the euro area. "The Bundestag’s enhanced powers will force the Brussels machinery and the complex EU political summit mechanism to profoundly change to accommodate the German parliament’s new powers," it added.

Meanwhile, in Brussels, EU officials involved in the summit's preparations downplayed the divergences between Paris and Belin, saying they were "exaggerated" and that "the summit will take place on Sunday" amid rumours that the meeting would be cancelled.

In the end, the two leaders issued a joint statement, saying: "France and Germany have agreed that all elements of this ambitious and comprehensive response will be discussed in depth at the summit on Sunday in order to be finally adopted by the Heads of State and Government at a second meeting no later than Wednesday."

Richard Corbett, former MEP, now member of the cabinet of Herman Van Rompuy, provided insight on what could be expected from the upcoming summits.

Greek default and a so-called 'haircut' of the country's massive debt are on the agenda of the European Union's Sunday crunch summit on the eurozone's debt crisis, Slovakia's Prime Minister Iveta Radicova said Thursday.

"Default and a haircut of the Greek debt is on the agenda of Sunday's summit," outgoing prime minister Radicova told AFP a week after she sacrificed her government to secure passage of a crucial eurozone bailout fund.

At a summit on 21 July, eurozone heads of state and government approved a second aid package for Greece and reforms of the EU's bailout fund, the €440 billion European Financial Stability Facility (EFSF) (see summit statement).

But this decision soon proved insufficient as markets again piled pressure on Greece as well as weaker euro zone members Spain and Italy.

The European Commission unveiled proposals on 12 October aimed at breaking "the vicious cycle of uncertainty over sovereign debt sustainability".

It also calls for "maximising" the €440 billion euro zone's rescue fund, leveraging the European Financial Stability Facility (EFSF) in order to give it more firepower in case a bigger country like Spain or Italy would run into trouble.