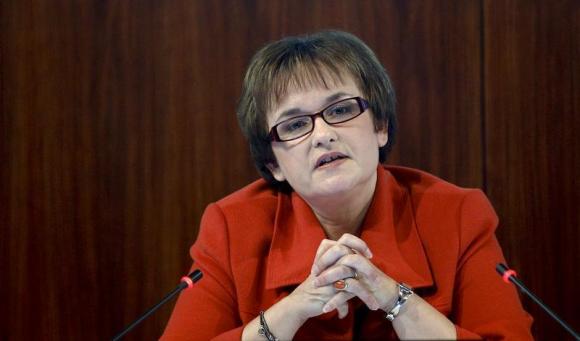 The European Parliament approved today (16 January) Sabine Lautenschlarger for the vacant seat on the European Central Bank's board. The German candidate has called for regulation on the planned pan-European bank wind-up agency would come into force earlier than 2018, EURACTIV Germany reports.

The Parliament was voting on its official position on the recommendation for Lautenschlaeger's appointment submitted by the Council of Ministers just over a week ago.

Before her nomination, the Bundesbank's vice-president said had hoped that regulation around the single resolution mechanism (SRM) – a eurozone authority with its own fund that would decide how to wind down or restructure banks that are no longer viable – would be finalised in April as planned.

"Furthermore I hope that we do not have to wait until 2018 for the SRM regulation to come into force, but rather that this happens much earlier so that European resolution can complement European supervision as soon as possible," said Lautenschlaeger, 49.

On Tuesday, an overwhelming majority of the Parliament's Committee for Economic and Monetary Affairs (ECON) spoke in favour of approving Lautenschläger to fill the empty seat on the executive board of the ECB.

The ECB post has been pending since board member Jörg Asmussen resigned last December, following the new coalition agreement in Germany. Two years into his term at the ECB, Asmussen left to join Chancellor Angela Merkel's new government as deputy labour minister.

At the hearing, 32 MEPs voted 'yes'. Only two MEPs from the far-left voted against the Bundesbank vice-president with one abstention from a Eurosceptic parliamentarian.

Currently the ECB's 23-head governing council – made up of members of the executive board and heads of national central banks – is comprised entirely of men. The nomination of Lautenschläger would make a considerable difference.

After the Parliament has selected someone to fill the post, it is still up to the European Council to make the final decision with votes from the 18 heads of government in the eurozone.

Particularly on the topic of banking supervision, Lagen said Lautenschläger's qualifications were totally and utterly convincing. On the other hand, she was slightly more reserved regarding monetary policy, Langen said.

He also mentioned that Lautenschläger "held back somewhat" concerning the relationship between the ECB and the German Bundesbank and became noticeably uncomfortable. "It would not have been harmful for her to answer a bit more aggressively", said Langen. She left a very good impression but agreement from the Parliament Committee was only a formality, he added.

As expected, parliamentarians asked the candidate how she sees the role of the ECB in overcoming the economic and financial crisis.

MEPs wanted to know if she was more critical of the ECB than her current superior, Bundesbank President Jens Weidmann, or if she would follow in the footsteps of her predecessor, Asmussen.

By contrast with Weidmann, Asmussen followed a more flexible interpretation of the ECB's mandate "to maintain the euro's purchasing power and thus price stability in the euro area". In this way, he supported Mario Draghi's position when the ECB president said the Central Bank would do "everything necessary" to preserve the euro. This includes, in emergency circumstances, unlimited purchasing of government bonds from crisis-ridden countries.

But Lautenschläger did not provide a clear answer to the question.

"I will have my own position," she told Reuters. She also rejected claims that the Bundesbank was stirring up anti-European sentiment in Germany.

From the answers provided, it seems that Lautenschläger's position is closer to Weidmann and the Bundesbank. Indeed, she expressed her awareness of the risks posed by a low-interest policy, such as rising asset prices.

For Jürgen Klute, MEP from the Left Party, this precisely explains why candidate Lautenschläger is too close to "the dominating economic mainstream in Germany". She clearly spoke against a progressive monetary policy, Klute said.

"Naturally, a relaxed monetary policy alone is not enough to overcome the current crisis", he told euractiv.de, "but unfortunately there haven't been any new impulses from Mrs. Lautenschläger over how to restore the transmission between monetary policy and financing the real economy through the banks".

The Left Party, Klute said, sees demand for a fundamental reform of the ECB "to break the enduring dependence of states on financial markets and create sustainable and socially balanced growth."

The European Central Bank (ECB), which sets interest rates for the 17-member eurozone, has been keeping rates at historic lows in a bid to ease the pressures of the financial and economic crises sweeping across Europe.

In November 2013, the ECB cut its main interest rate to a new record low of 0.25% in response to a drop in inflation in October 2013, well below its target level of just under 2%.