The European Parliament’s Tax Rulings Committee has called for sanctions to be placed on multinationals that refused to attend hearings on their tax practices.  EURACTIV France reports.

Frustrated by the lack of cooperation from multinational companies in its investigation into tax competition, the European Parliament has demanded the means to retaliate.

The special committee on Tax Rulings (TAXE), established in the wake of the Luxleaks scandal, has spent recent months examining agreements between states and multinational companies to reduce their tax bills. These agreements cause unfair tax competition between EU member states.

>> Read: Luxleaks committee to be extended until October

But the report had to be drafted without the testimony of almost all the companies the TAXE Committee had summoned to give evidence. Only four out of the 18 companies contacted by MEPs attended a hearing at the European Parliament. 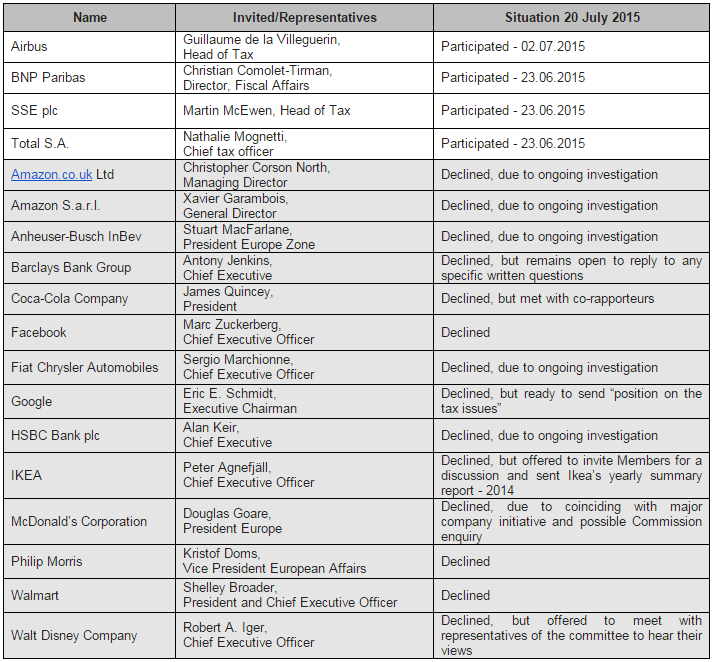 This did not impress the law makers of the TAXE committee, who yesterday (17 September) retaliated by calling for the exclusion of certain lobbyists from the EU’s transparency register.

“I want those companies that did not respond to the invitation to the Parliament to be blacklisted. They should be completely excluded from this parliament at least for a certain time,” Michael Theurer said.

The Liberal MEP is not alone in demanding sanctions. Alain Lamassoure, a French Republican MEP and TAXE committee president, said, “I have written a letter to the President of the Parliament to ask for the accreditation for representatives of these companies to be systematically withdrawn.”

In reality, the effects of such a measure would be limited, because lobbyists would only be excluded from the register that aids access to the Parliament, not the Parliament itself.

“The EP’s President must now take up the baton and push for the non-compliant corporations to be excluded from the EU’s transparency register, so they also lose access to other institutions,” Green MEP Sven Giegold said.

“Under the current rules, we cannot oblige Ikea to come before our Parliament,” MEP Fabio de Masi (Die Linke) said. He called for this absence of legally binding means for MEPs to summon the representatives of multinationals to be addressed.

As part of the review of the Parliament and Commission’s joint lobby register, the Committee on Constitutional Affairs will evaluate whether the European Parliament should have the power to impose sanctions on business representatives that refuse to cooperate with the institution.

Lack of respect for the Parliament

But MEPs have said that multinationals are not the only organisations to have shown contempt for the TAXE committee.

“The information we requested from the European Commission, the member states and the Code of Conduct Group was not supplied because it was supposedly confidential,” said rapporteur Elisa Ferreira. She called this “unacceptable”.

Five out of the 28 EU member states did not respond to the TAXE committee’s information requests: Austria, Bulgaria, Cyprus, Denmark and Slovenia.

Despite being asked twice, the Council failed to comply, while the European Commission cited opposition from member states to justify its refusal to provide certain documents.

“Our committee must put pressure on the Council, the Commission and the member states to ensure that mutual respect becomes the norm,” Elisa Ferreira added.

De Masi said, “We were not able to complete our mandate because the Council, the Commission and the Parliament did not make the necessary documents available to us.”

“Many experts confirmed that making these documents public would have been absolutely no problem,” he added.

Philippe Lamberts, a Belgian Green MEP, said, “We should extend the work of this committee for as long as it takes to get these documents.”

Ferreira called on her colleagues to adopt the draft report “by a large majority in order to force the Council to adopt fair positions on taxation in the European Union”.

Molly Scott Cato, a UK Green MEP and the Green group's economic and finance spokesperson, said,  "Jean Claude Juncker must deal with his role in the subject matter of the EP's tax investigation whilst prime minister and finance minister of Luxembourg. He cannot expect to hide behind his current position as Commission president. He also needs to ensure that the committee is provided with all necessary documents from the Commission to investigate the issue of tax dumping in the EU. Council and EU governments, but also the Commission (2), have failed to provide the committee with access to all requested documents."

22 September: hearings of the finance ministers of Luxembourg, France, Germany, Italy and Spain by the TAXE committee.

Late October 2015: end of the mandate of the TAXE special committee

November 2015: vote on the report of the TAXE special committee