Partners tell Greece not to gamble with its future 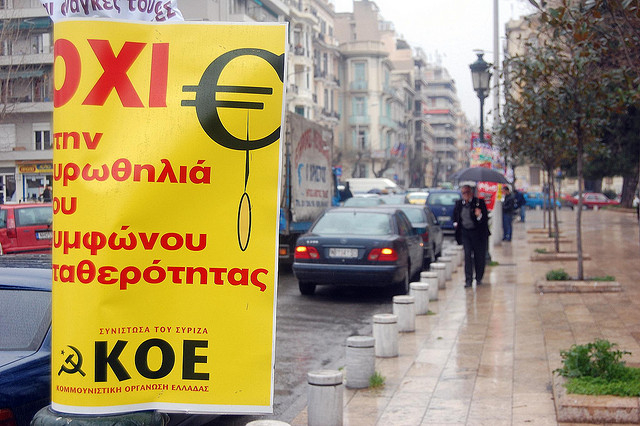 Greece’s leftist government faced a barrage of warnings yesterday (17 June) that it risked being forced out of the eurozone and left without support if it failed to strike a swift aid-for-reforms deal with its creditors.

The Bank of Greece said the country’s future in the European Union itself could also be at risk without a deal, underlining the extent to which officials who once refused any suggestion of “Grexit” are now openly discussing the prospect.

Despite urgent pleas, including from the White House, there has been little sign of movement since talks between officials from Greece, the European Union, European Central Bank and International Monetary Fund collapsed on Sunday.

Hopes of a breakthrough today at a meeting of European finance ministers, once seen as the last opportunity for an agreement, looked increasingly remote.

Athens must find a way out of the impasse by the end of June, when it faces a €1.6 billion repayment due to the International Monetary Fund, potentially leaving it bankrupt and on the verge of exiting the eurozone.

“People are getting anxious on both sides. Athens expects Brussels to move. And Brussels expects Athens to move. And it’s stuck,” said a senior EU diplomat, who declined to be named.

“It’s very dangerous, and we may have an accident.”

A top Greek negotiator told Reuters that Prime Minister Alexis Tsipras’ leftist government was ready to make unspecified concessions but he once again ruled out any cuts to pensions – a major sticking point in the negotiations.

Tsipras called European Commission chief Jean-Claude Juncker on Wednesday, their first contact on the stand-off over a bailout deal since last week, a European official said.

“Tsipras called Juncker. They spoke for a few minutes and agreed to talk later, no date was set,” the official told AFP, a day after Juncker accused Tsipras of lying to the Greek people about the negotiations.

The last time they spoke was on Sunday, the official said, the day that talks between Athens and its EU-IMF creditors in Brussels collapsed and further raised fears of a Greek default and possible euro exit.

Juncker and Tsipras would speak again “in coming days”, the official said.

Austria’s Chancellor Werner Faymann – one of the European leaders most sympathetic to the Greek government’s demands for an end to austerity – met with Tsipras for nearly two hours on Wednesday at the prime minister’s office in Athens.

But there was little sign of movement from Tsipras who sees further pension cuts to low earners, a core component of demands for more economic reforms from Greece’s international lenders, as a red line his leftist Syriza party will not cross.

In Germany, Europe’s biggest economy, government and central bank officials said it was up to Greece to move.

“The responsibility for whether Greece remains in the euro is entirely up to the Greek government,” Jens Weidmann, head of the Bundesbank said in a joint interview with three European newspapers. He added that if Athens were to fail to meet a debt payment “the consequences would be hard to control” but it could not expect central bank support.

“If the talks fail at the political level, the ECB will have no choice but to draw the necessary conclusions. It is up to politics, governments and parliaments to decide whether to finance Greece.”

Greek negotiator Euclid Tsakalotos confirmed that Greece did not have the money to repay the IMF, but said that the government would only accept a deal that was sustainable and addressed debt, financing and investment – issues the European Union has said it does not want to open at this stage.

“If you have that, then the Greek government will sign the deal,” Tsakalotos said. “If it doesn’t have that kind of deal, there is no point in signing onto something that you know is going to fail.”

Greek Finance Minister Yanis Varoufakis told reporters in Paris he was not expecting a deal at Thursday’s gathering in Luxembourg and said only agreement between heads of government could overcome the deadlock.

What may follow if no deal is reached remains unclear as no member of the eurozone has ever defaulted on its debt.

The Greek central bank said reaching an accord was “an historical imperative” that the country could not ignore.

“Failure to reach an agreement would … mark the beginning of a painful course that would lead initially to a Greek default and ultimately to the country’s exit from the euro area and, most likely, from the European Union,” the Bank of Greece said in a regular report.

The comment drew an angry reaction from the ruling Syriza party which said Bank of Greece Governor Yannis Stournaras, a former finance minister in a conservative-led government, had exceeded his authority and was trying to set “asphyxiating” limits on the government.

Elected in January on a pledge to end years of grinding austerity, Tsipras wants his European partners to renegotiate Greece’s debt, but they have ruled that out for now and instead want to see a fresh round of economic reforms, including pension cuts, to help the state balance its books.

There was little sign of any change in his position as he insisted that without an “honourable compromise” Greece would not accept “the continuation of a catastrophic policy”.

Months of uncertainty have already taken their toll. After years of recession, Greece’s economy finally started to grow again last year, but it fell back into negative growth in the first quarter of 2015 and Greece’s central bank predicted the slowdown would accelerate in the second quarter.

Opinion polls show a majority of Greeks want to remain in the euro but there has also been deep resentment over the cuts demanded of Greece, which has seen its economy shrink by more than 25 percent since the start of the crisis.

“We have to fight even if there is the danger of returning to (the) drachma, which is something I don’t want,” said 43 year-old public servant Christos Michailidis, attending an anti-austerity rally in Athens that drew a few thousand protesters.

Britain, not a member of the eurozone, said it was stepping up preparations for the possibility of Greece falling out of the single currency.

In a sign that the European Central Bank was still standing by Greece, the ECB raised the ceiling on its emergency lifeline to the nation’s stricken banks to €84.1 billion from €83 billion. The ECB has been raising the ceiling in small amounts and the substantial hike of more than €1 billion reflected the growing strains on Greece’s banks as depositors pull money out.

The Greek central bank has said the crisis prompted an outflow of deposits totalling about €30 billion from Greek lenders between October and April. The outflows are continuing.

Underlining the gulf in perceptions separating Greece and its creditors, a Greek parliamentary “Debt Truth Committee” set up in April to investigate the recent austerity imposed on the country concluded Athens was under no obligation to repay its debts. The findings of the report are not binding.

“We came to the conclusion that Greece should not pay this debt because it is illegal, illegitimate, and odious,” it said.

Such sentiments have lost Greece much sympathy in Europe.

>>Read: Tusk tells Greece : The game is over

The Bavarian allies of German Chancellor Angela Merkel accused Athens on Wednesday of not grasping the seriousness of the situation, with CSU Secretary-General Andreas Scheuer calling Greek rulers “clowns”.

A few thousand demonstrators rallied in front of the parliament in Athens yesterday to protest against austerity and back Tsipras.

Organized through social media platforms and encouraged by Syriza, the rally was much smaller than those that have packed tens of thousands into Syntagma Square in front of parliament at other points during six years of crisis.

Despite the deepening crisis, Tsipras is going ahead with a planned visit to Russia from Thursday. He is due to stay till Saturday, attend an economic forum in Saint Petersburg and meet President Vladimir Putin.