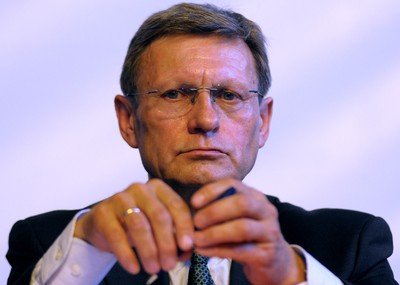 Polish Prime Minister Donald Tusk said today (20 May) that Leszek Balcerowicz, architect of his country's 'shock therapy' reforms in the early 1990s, could be a good candidate to become the new head of the International Monetary Fund.

However, Tusk added that he had not yet made the 64-year-old Balcerowicz an official candidate, as he was "not sure" whether a candidate from Poland could win the position, which has become vacant following the resignation of Dominique Strauss-Kahn.

Poland is not a eurozone country. However, the European Union's official position is that its candidate should come from an EU country but not necessarily a eurozone member.

Balcerowicz is a former deputy prime minister and minister of finance, and recently served as president of the National Bank of Poland. He is mostly known for the so-called 'Balcerowicz plan' to end hyperinflation in Poland in the early stages of his country's transition to a market economy.

The plan was broadly successful, but led to substantial price increases and was dubbed 'shock therapy'. Later on, 'shock therapy' was applied to other post-communist economies.

At present, Balcerowicz is a professor of economics at the Warsaw School of Economics and a member of the board of Bruegel, a Brussels-based think-tank.

Former Polish Prime Minister Krzysztof Bielecki was quoted as saying that the chances of Balcerowicz winning the IMF top job were slim.

Bielecki, himself a respected economist, said the frontrunners for the position could be French Finance Minister Christine Lagarde and former UK Prime Minister Gordon Brown. However, Brown lacks the support of his successor, Conservative Prime Minister David Cameron.

For now, the Brussels rumour mill appears to favour Lagarde to succeed her compatriot in Washington. According to Reuters, Lagarde's deft handling of the G20 presidency has made the French finance minister a frontrunner to become the first woman to run the IMF.

Skeleton in the closet

But a potential legal inquiry could yet upset her chances.

In her present ministerial capacity, Lagarde intervened in 2007 to end a court dispute in which French politician Bernard Tapie claimed to have been cheated by the Credit Lyonnais bank. She ordered a special panel of judges to arbitrate, and as a result, Tapie, who is a personal friend of President Nicolas Sarkozy, received 285 million euros in damages. The out-of-court settlement was labelled scandalous by the opposition and public opinion.

Lagarde denies any misconduct, and there is no suggestion that she profited personally. In what should be seen as an early warning that candidates will be scrutinised for any 'skeletons in the closet', Council President Herman Van Rompuy said yesterday that the next leader of the IMF should be "a person with the highest level of ethics".

The London G20 summit in 2009 decided that the next IMF chief would be chosen according to merit. But as efforts to stabilise eurozone countries Greece, Ireland and Portugal are still ongoing, European leaders are apparently insisting once again that the job should be reserved for an EU national (see 'Background').

In the absence of a strong European candidate, voices are getting louder that the next IMF chief should come from an emerging economy.