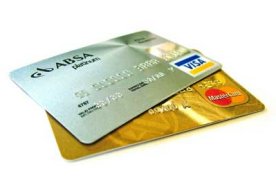 President Vladimir Putin said today (27 March) that Russia would develop its own credit card system, in order to reduce reliance on Western payment card companies Visa and MasterCard and soften the potential blow from EU, US sanctions.

Putin voiced his support for plans, described by senior officials as a domestic-based system, in response to restrictions placed on Russian banks last week by the American credit card giants.

“We certainly must do this, and we will do it,” Putin told senior Russian lawmakers during a meeting that mainly focused on efforts to integrate the Crimea region after he signed legislation to make it part of Russia last week.

Visa and MasterCard stopped providing services for payment transactions for clients at Bank Rossiya last week, under US sanctions over what the West says is Russia’s illegal annexation of Crimea (see background.)

The two credit card firms also suspended services for clients at several other banks, whose shareholders are on the US sanctions list. They resumed services after the US government said this did not mean the banks were subject to sanctions.

“It is really too bad that certain companies have decided on […] restrictions,” Putin said, without naming Visa or MasterCard. “I think this will simply cause them to lose certain segments of the market – a very profitable market.”

Russia has been largely integrated into the global economy since the 1991 collapse of the communist Soviet Union. But the biggest superpower confrontation since the Cold War has led officials to look for ways to reduce reliance on the West.

After hitting Russian officials and lawmakers with visa bans and asset freezes, the United States and European Union are threatening measures affecting entire economic sectors if Russia continues to escalate the crisis.

Western states have emphasised they do not recognise Crimea as being part of Russia. But President Putin – his popularity boosted by the annexation – has pressed ahead with steps to integrate the territory.

“We must do everything as swiftly as possible so that those who live in Crimea … feel like fully-fledged citizens of the Russian Federation,” Putin told the senior lawmakers.

Crimeans voted to secede from Ukraine and join Russia in a March 16 referendum dismissed as a sham by Western governments, which say it violated Ukraine’s constitution, and was held only after Russian forces seized control of the Black Sea peninsula.

The EU and the USA have responded to the Crimea referendum held on 16 March and on the de facto annexation of the Ukraine peninsula by Russia almost in parallel, the USA being however faster.

On 17 March, US President Barack Obama slapped sanctions on 11 Russians and Ukrainians blamed for the seizure, including former Ukrainian president Viktor Yanukovich, and Vladislav Surkov and Sergei Glazyev, two aides to Putin.

Later on the same day, EU foreign ministers agreed to impose visa restrictions and asset freezes on 21 Russian and Ukrainian officials for their roles in the events leading to the 16 March referendum.

The list includes three Russian military commanders in Crimea, and districts bordering on Ukraine. [see list on page 12-13 of the EU Official Journal].

Putin himself, suspected in the West of trying to resurrect the former Soviet Union under Russian leadership, does not appear on either of the blacklists.

On 20 March, Obama announced from Washington that the Americans had added 20 new officials to its sanctions list, including Putin's chief of staff Sergei Ivanov, as well as Rossia Bank and Gennadi Timchenko, co-owner of Gunvor.

Then the EU on 21 March adopted a list with 12 more names, including close collaborators to Putin.