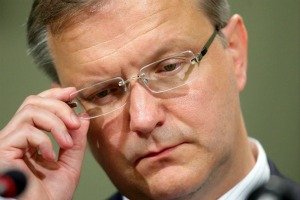 Economic and Monetary Affairs Commissioner Olli Rehn today (5 August) apologised for “bad communication” that might have added fuel to the burning euro zone crisis. In a lengthy speech laced with explanations he attempted to mollify capitals irritated by a recent letter by his boss, Commission President José Manuel Barroso.

Barroso’s impromptu letter sent on Wednesday (3 August) to the leaders of the eurozone has sparked widespread negative reaction within the media, and been blamed by many as a catalyst for the flailing bond and equity markets, which continued to plummet today.

Rehn – who had cut short his holidays to address journalists in Brussels – insisted that the Commission make more efforts to ensure that the decisions taken at the 21 July euro zone summit were better understood and interpreted by markets.

Significantly Rehn sought to defuse tensions arising from what he described as “certain problems of communication we [the Commission] have had in recent weeks”, releasing a written text of his statement immediately afterwards.

In the letter Barroso sought to recalibrate and increase the European Financial Stability Facility (EFSF), which the EU set up in May 2010 at the height of the Greek crisis, and the ESM, its extension which will be enshrined in the EU treaties.

Last March leaders decided decided that the ESM will hold €700 billion to shield eurozone countries from future debt crises, but many commentators believe the size of EFSF should be increased to least 2 trillion euro.

Another controversial element Barroso’s letter was his statement that “it is clear that we are no longer managing a crisis just in the euro-area periphery”, taken as meaning that Italy and Spain – but also countries such as Belgium and France – could soon be engulfed.

"It is not clear how the re-opening of a debate only two weeks after the Council might contribute to calming the markets," Martin Kotthaus, spokesperson of German Finance Minister Wolfgang Schäuble, was cited as saying by EURACTIV Germany.

"Now, the most important issue is to implement the Council agreement rapidly. Everyone should focus on that. No one should raise questions that have already been answered on 21 July," Kotthaus added.

"Far-reaching and good decisions have been made only two weeks ago. That's why I don't see the necessity of such a debate," Rösler said.

Quoting government sources, French business daily Les Echos wrote that Barroso’s suggestion would act as a “touchpaper to the gunpowder”. The daily also reminded readers that Paris is wary of further burdening its foreign debt as a result of EFSF commitments.

“In its current configuration [EFSF] has already helped to weigh down the level of public debt amongst participating countries,” the daily wrote. Rehn remained tight-lipped about the extent to which the EFSF should be raised in his address, insisting that Italy and Spain required no bailout, and repeating his position that the market unrest was not justified on grounds of economic fundamentals.

Barroso meanwhile remains on holiday somewhere in his native Portugal, spokesperson Karolina Kottova said today, adding that he was continuing to work closely on the eurozone issue and keeping in touch with EU leaders over the phone.