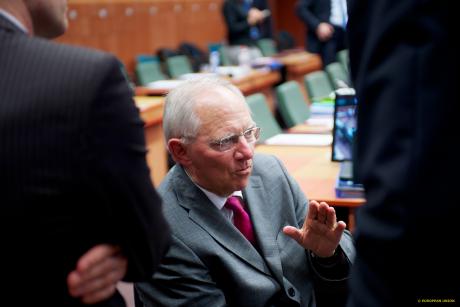 German Finance Minister Wolfgang Schäuble is concerned about France's interest in the Economic and Monetary Affairs portfolio. [The Council of the European Union]

In light of France’s ongoing deficit problems, German Finance Minister Wolfgang Schäuble expressed doubts over whether the country should be given the influential post of Commissioner for Monetary Affairs. EURACTIV Germany reports.

Pierre Moscovici, the former French Finance Minister, is being considered as a candidate for the Economic and Monetary Affairs portfolio in negotiations over the new European Commission. But German Finance Minister Wolfgang Schäuble expressed his doubts over France’s claim to the coveted job.

Since 2009, France has been involved in an excessive deficit procedure, Schäuble told an event hosted by the Centre for European Policy (CEP) think tank in Freiburg last Friday (11 July).

If the country continues on its current path, the French will not be able to meet the deadline set to get their state deficit back in control, he warned.

Compliance involves pushing new debt back under 3% of GDP, Schäuble said, indicating that France’s deadline has already been extended twice. The new European Commission will have to re-evaluate France’s budget plan later this year. If the Commission decides to reject the plan, France could be hit with sanctions for non-compliance, he warned.

In Brussels, the EU’s Economic Monetary Affairs Commissioner oversees compliance with the Stability Pact in the European Commission, a job held by Finland’s Olli Rehn in the outgoing EU Executive.

Whether or not France “of all countries” in its current state should be allocated this post, “is for smarter people than myself to decide,” Schäuble remarked.

Even if he often disagreed with the Frenchman, Schäuble said he worked with Moscovici as a trustworthy and rational partner. But other factors play into the selection of the Commissioner, the German Finance Minister pointed out.

‘Damage’ to the Stability and Growth Pact

Alexander Graf Lambsdorff MEP, the chairman of the Parliament’s FDP delegation, told Deutschlandfunk radio on Tuesday (15 July) that Moscovici should be held accountable for the country’s rising deficit and worsening economic situation. For this reason, he ruled out Moscovici to succeed Olli Rehn.

At the Freiburg event, Lüder Gerken, the CEP chairman, warned that Moscovici’s appointment, would do “considerable damage” to the Stability and Growth Pact, which limits public deficits to 3% of GDP in the euro zone.

Gerken reminded that the Commissioner for Economics and Monetary Affairs had a significant responsibility when it comes to policing the Stability and Growth Pact, especially when it comes to implement sanctions for non-compliance. For him, Moscovici is not the right man for the job.

“As Finance Minister, Pierre Moscovici has himself contributed to the fact that France will not be able to meet the deadline to reduce its deficit. This clearly shows that he questions the rules of the pact. In this context, [Moscovici] will not stand up for necessary budget disciplinary measures in the member states.”

Moscovici: ‘Germany was the sick man’

“Reform processes take time”, he explained. “At the start of this millennium, Germany was considered to be the sick man of Europe. Only after years of tough reforms, has the economy recovered.”

Jean-Claude Juncker, the newly-elected President of the European Commission, will consult with national governments over the summer to fill the remaining 27 Commission posts. Germany has already appointed Günther Oettinger, who served as Energy Commissioner in the previous term, and several other countries have also made their choice public.

After Juncker allocates portfolios within his new team, each Commissioner-designate will appear in Parliament for confirmation hearings in September.