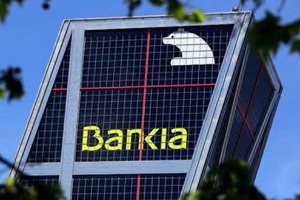 EU regulators will order shares of Spain's Bankia be valued at just €0.01 each, a European Commission source said on Tuesday (5 March), meaning shareholders including thousands of ordinary Spaniards will be hit hard in a debt-for-equity swap to boost the bank's finances.

Bankia's BKIA.MI minimal valuation is being disputed by Spanish authorities, which had been seeking a €0.10 per share valuation, sources familiar with the matter told Reuters last week.

The figure is crucial as the rescued bank prepares to swap debt into shares as part of a €10.7 billion  capital hike, affecting hundreds of thousands of small investors.

"The share price has to be the minimum under Spanish laws for share prices," said the source, who declined to be named because of the sensitivity of the matter.

The source said the European Commission set out the principle, but not the figure, in Bankia's restructuring plan approved in November last year after its billion-euro rescue.

"We never adjust restructuring plans unless financial stability is at risk. Equity holders have to contribute," the person said.

According to Manuel Conthe, a former chairman at Spain's Securities and Exchange Commission (CNMV) who is now at Madrid-based law firm Bird & Bird, the minimum nominal price for shares under Spain´s Stock Exchange listing requirements is €0.01.

"This applies not only to new shares in IPOs [Initial public offering] but also to existing shares," Conthe said.

The Eurogroup announced on 20 July it would grant a bailout of up to €100 billion to Spain to help the country recapitalise its banks (>> read full statement).

The exact amount that Spain will borrow from the eurozone will only be determined later on, the finance ministers said.

The eurozone heads of state and governments had earlier agreed, on 29 June, that EU rescue funds could be used in a "flexible and efficient manner"

Under the deal, Italy, Spain and other troubled countries will also be able to tap the bloc's temporary EFSF and permanent ESM rescue funds to support their government bonds on financial markets.

The EU summit statement did not give further detail, saying only that the flexibility will be offered to member states that are in line with EU budget deficit rules.