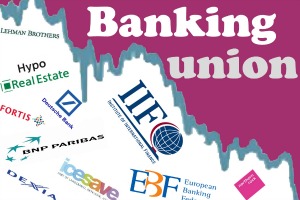 The European Union edged closer to agreeing a scheme to close failing banks but will leave big gaps in a wider reform that was supposed to unite the eurozone behind its troubled lenders.

More than five years since a financial crisis struck, Europe is crafting its most ambitious reform since the launch of the euro – an agency and fund to shut problem banks as soon as the European Central Bank starts to police them next year.

European leaders, meeting at a summit today (19 December) and tomorrow, want to sign off on a deal so that this banking union can start in 2015, bolstering confidence.

The aim is to prevent a repeat of the turmoil when failing banks in countries from Ireland to Cyprus brought their states to the brink of bankruptcy.

By setting up a system to shutter troubled lenders, Europe would equip the ECB with the means of dealing with teetering banks. However, the system that is emerging, in an attempt to accommodate sceptical countries, is unwieldy.

Earlier in the talks, Michel Barnier, the European commissioner in charge of financial regulation, warned ministers against creating a "complex" system. "We have to move fast in emergencies to resolve certain banks," he told finance ministers in Brussels.

The ECB also unsuccessfully sought backing for a fast-track procedure to circumvent a laborious process that could involve ministers from across Europe in deciding the fate of a sick bank, taking days to conclude.

The long-winded process taking shape also drew heavy criticism from the European Parliament, which has a say in the reform.

Sharon Bowles, one of its most influential members, warned that lawmakers would stop any scheme that allowed "politics and bully tactics". "We do not want any more fiascos like those witnessed with Dexia and Fortis," she said.

Central elements of the banking union are still missing. For one, Germany continues to stand firm against the use of euro zone money to back a scheme for tackling troubled banks.

Its finance minister said no money from the euro zone's rescue fund, the €500-billion European Stability Mechanism (ESM), would be available directly for bank clean-ups.

Instead, a government struggling to pay for a failing bank will have to ask for an ESM-paid-for bailout, a humiliating step with strict conditions attached.

That deals a blow to a central tenet of banking union as it was originally conceived, namely that weak governments should not be left to cope with banks, whose problems can buckle a country.

"The only way to the ESM is through the nation states," Wolfgang Schäuble told reporters, reiterating the long-held German view that such help can be given only to governments and not directly to banks.

Unlike in the United States, where the federal government can transfer funds to help weaker states, countries in the euro zone do not send such aid. Germany, which makes up more than a third of the euro zone's economy, wants to keep it that way.

Instead, euro zone ministers agreed that banks will pay into funds for the closure of failed lenders, amassing roughly 55 billion euros ($76 billion) over 10 years.

When the fund is full, it could borrow but without the ESM's financial muscle to back it.

Schaeuble's blunt message jarred with that of other ministers, who appeared to understand the role of the ESM differently.

The dissonant voices cast a question mark over whether the new scheme to close banks and the entire banking union project.

"Using the ESM has not been ruled out at all," Luis de Guindos, Spain's economy minister, told reporters, a line echoed by his Italian counterpart Fabrizio Saccomanni.

French Finance Minister Pierre Moscovici conceded, however, that work on the shape of the backstop remained to be done.

"We wanted a backstop," he said. "We are working on its definition, which will evolve over time with several possibilities."

The ECB, on whose support many banks depend, has become agitated because delays and uncertainty over how failed lenders will be dealt with could compromise a clean up the financial sector after ECB health checks next year.

ECB President Mario Draghi, said on Monday that the latest plan to close bad banks may be too complex and inadequately funded. But there is little chance of a change without German consent.

Completing a banking union is central to keeping the euro safe in the long term, a currency bloc that is as political in its goal of deepening European integration as it is economic.

The euro lacks the workings of a normal currency union such as in the United States, which has a central finance ministry and regulators alongside a central bank. Europe's banking union had promised to help change that.

What results in the end is likely to be far off what was originally hoped for. One leg, a common system of deposit guarantees, has been entirely dropped.